THE EUROPEAN Commission has blocked Slovakia from drawing European funds from two operational programmes: transport and environment. The move came after the country sought reimbursement for expenses which, under EU rules, should be paid out of the state budget. Moreover, since Slovakia exceeded the maximum number of errors it can make during a single year, the EC has stopped all payments within the programmes until the country resolves the situation. At the moment the EC is blocking about €44 million within the Operational Programme Transport (OPD) and more than €43 million within the Operational Programme Environment. 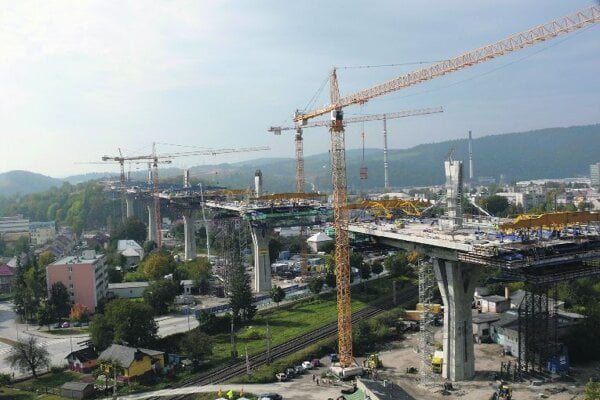 THE EUROPEAN Commission has blocked Slovakia from drawing European funds from two operational programmes: transport and environment. The move came after the country sought reimbursement for expenses which, under EU rules, should be paid out of the state budget. Moreover, since Slovakia exceeded the maximum number of errors it can make during a single year, the EC has stopped all payments within the programmes until the country resolves the situation. At the moment the EC is blocking about €44 million within the Operational Programme Transport (OPD) and more than €43 million within the Operational Programme Environment.

While the country waits for a final decision over the funds, politicians have been arguing about who is responsible for the current problems.

Transport Minister Ján Počiatek claimed that management of the funds during the previous government, in which the transport portfolio was the responsibility of his predecessor Ján Figeľ, now an opposition MP and leader of the Christian Democratic Movement (KDH), was “was incompetent and inadequate”.

“The consequences are rearing their ugly head even now, when the commission refuses to cover a certain portion of the payments,” Počiatek said, as quoted by the TASR newswire.

Figeľ, by contrast, claimed that the ministry under him had only implemented agreements that had been signed during the first government of Robert Fico, which was in office until 2010.

The problems started after the EC received 12 invoices from Slovakia worth about €5.4 million for construction of the D1 highway section between Sverepec and Vrtižer, near Považská Bystrica, which was under construction in 2011. Transport Ministry spokesperson Martin Kóňa, speaking on behalf of Počiatek, said on February 20 that Slovakia had asked for repayment of costs incurred changing the road subsurface and the crash barriers between the carriageways. Since these changes could not be classed as ‘unpredictable circumstances’, Slovakia was not entitled to seek reimbursement for them, Kóňa stated, as quoted in the ministry’s press release.

Though in the meantime the National Highway Company (NDS), the procurer of the road, returned the money to EC, the annual report showed that the errors made between January 1 and December 31, 2011 affected 3.33 percent of the budget, the Transport Ministry stated in the press release. The allowed limit is only 2 percent.

Ingrid Ludviková, a spokesperson for the EC Representation in Slovakia, explained that the EC defines ‘errors’ as costs claimed which should not be reimbursed from structural funds. If such errors exceed 2 percent of the programme budget, it means that there are problems in the management of the programme. Such errors are often revealed after the national supervising authorities finish their own checks on a project, Ludviková said.

“Under such circumstances the EC has the possibility to stop the payments and ask the member state to submit a report which describes all interruptions or repayments since the beginning of the programming period,” Ludviková said, adding that based on its response the EC decides whether the country is able to correct the errors.

The EC sent a letter informing Slovakia that is was halting the payments on February 14, 2013. It also asked Slovakia to prepare an explanation of the errors by March 1, 2013.

“If the EC reads the response and finds it satisfactory the reimbursement might be restored,”

Ludviková said. However, she stressed that if the EC is not satisfied with the measures implemented, it can block the funds until the Slovak authorities remove “the causes of the high rate of errors”.

When asked about the possible effects of the blocked money on ongoing as well as future projects, Kóňa told The Slovak Spectator that the ministry hoped these would not be affected. He added that the ministry “immediately started negotiations with the EC with the aim of correcting mistakes which were made during the rule of Ján Figeľ”.

“Additionally, Minister Ján Počiatek immediately launched an audit into whether the former management of the ministry did not leave us more such mines,” Kóňa said, adding that the ministry cannot exclude the possibility that other possible errors might in some way disrupt the plan to build highways.

Moreover, the ministry is preparing a risk analysis which will evaluate the mistakes from previous implementation of the programme and will suggest systematic correction measures.

“The Environment Ministry had zero defectiveness, so our operational programme has been running in the proper regime and does not prove any errors since we launched it,” Environment Minister Peter Žiga said, as quoted by public broadcaster Slovak Television (STV).

After the Transport Ministry reported the financial blockage, politicians started accusing each other of responsibility for the problems. Počiatek said that the case was another example of the poor condition in which he had received the ministry from the previous government.

Kóňa added that people working at the ministry under the previous government had made a mistake by sending the invoices to Brussels instead of the NDS.

“This error is the reason for the halt in payments,” Kóňa said, as quoted by the SITA newswire. “If Figeľ’s people had done their work properly, nothing would have happened.”

However, Figeľ rejected the accusations, saying that the first Fico government was ultimately responsible for the current state of affairs. At the time, the ministry was led by Ľubomír Vážny, who is now deputy prime minister for investments. Figeľ said that while he was minister he merely continued fulfilling existing agreements and addendums signed by the previous management, TASR wrote.

Vážny, on the other hand, said that it was Figeľ who had asked the EC to reimburse the invoices in 2011.

“Moreover, a government audit confirmed that there was insufficient first-grade control of the supervisory authority [i.e. the Transport Ministry], which was under his control in 2011,” Vážny said, as quoted by Hospodárske Noviny.

“The reason for the suspension of payments was the preliminary results of an audit carried out by EC employees in 2012,” said Labour Ministry spokesperson Michal Stuška, as quoted by Hospodárske Noviny. He added that the EC found errors in eight of 14 projects that were checked.

Though the ministry did not specify the exact amount that had been blocked, Stuška said that the suspensions do not concern projects aimed at employing young people or affecting social workers in the field.