IN LIGHT of the year-on-year growth rate of 0.7 percent that Slovakia’s economy posted in the last three months of 2012, the stratospheric GDP growth figures of up to 9 percent which the country – then dubbed ‘the Tatra Tiger’ – produced in 2006 and 2007 now seem like something of an anomaly. Nevertheless, the country at least avoided recession last year, at a time when most economies in the European Union were contracting instead of growing. For this, it mostly had foreign demand to thank. 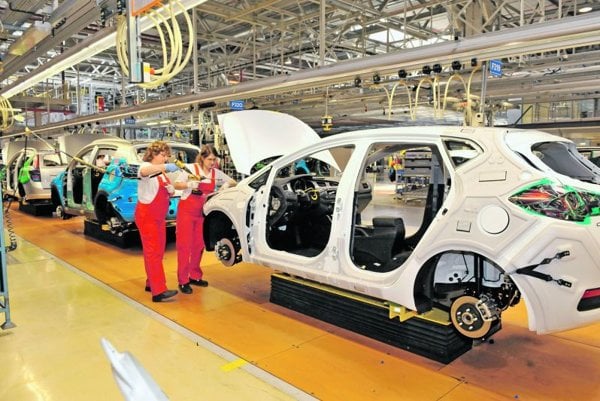 IN LIGHT of the year-on-year growth rate of 0.7 percent that Slovakia’s economy posted in the last three months of 2012, the stratospheric GDP growth figures of up to 9 percent which the country – then dubbed ‘the Tatra Tiger’ – produced in 2006 and 2007 now seem like something of an anomaly. Nevertheless, the country at least avoided recession last year, at a time when most economies in the European Union were contracting instead of growing. For this, it mostly had foreign demand to thank.

The lengthening shadow of unemployment, which is in turn affecting domestic consumption, is among the main factors depressing the GDP numbers, according to market analysts.

GDP posted moderate growth of 0.2 percent compared to the third quarter of 2012, but in the third quarter the economy posted year-on-year growth of 2.1 percent, Slovakia’s statistics authority said, confirming the somewhat gloomy numbers from its February 14 flash estimate.

“While GDP grew by 2.9 percent year-on-year in the first quarter, it went up by 2.6 percent in the second, by 2.1 percent in the third, and by 0.7 percent in the final quarter,” said Ľudmila Benkovičová, director of the Slovak Statistics Office, as quoted by the TASR newswire.

Growth in the last three months of 2012 was powered entirely by foreign demand, as in the previous quarters of the year, the Slovak Statistics Office said.

The news did not come as a surprise to market watchers, with Martin Baláž, an analyst for Slovenská Sporiteľňa bank, explaining that exports grew by 7 percent year-on-year, thus exceeding the 3-percent growth in imports.

“Higher production by carmakers due to extended capacities at the beginning of the year was still contributing to year-on-year growth,” Baláž said, adding that domestic demand dropped by almost 2 percent.

For Ľubomír Koršňák, an analyst with UniCredit bank, the foreign trade numbers had already suggested what fuelled the growth: “Even though the dynamics of exports slowed under the influence of the slowing economies of our most significant trading partners, low domestic demand was pushing down imports as well”.

“All the three components of domestic consumption have been dropping: household consumption, government spending as well as investment,” said Koršňák.

Slovakia’s growing unemployment, which translated into a drop in household consumption in the fourth quarter by 1.2 percent, is behind the ongoing decline in domestic consumption, said Baláž.

“By contrast, government spending dropped only slightly, by 0.3 percent year-on-year,” said Baláž, adding that investment also continued to fall significantly, by as much as 6 percent compared to the same period last year.

New rules embedded in Slovakia’s revised tax legislation and modified Labour Code, which became valid at the beginning of 2013, have equalised payroll tax deductions (i.e. health and social insurance contributions) for those on limited employment agreements and those in regular employment, raising employment expenses for many firms that employ temporary staff. Market watchers and human resources professionals suggest that these changes may be having an impact on the choices that employers make.

Unemployment in Slovakia grew in the final quarter of 2012 by 3.1 percentage points year-on-year to 14.4 percent, although the rate of growth decelerated when compared to the previous two quarters, the Statistics Office said, as reported by TASR. The number of unemployed people went up by 11,900 to 390,400.

Total employment last year increased by 0.6 percent when compared to 2011, said the statistics authority, adding that the number of employed people increased to 2.329 million. In the last quarter of 2012, employment dropped by 0.1 percent to 2.313 million people.

“In terms of the structure of labour the development of employment was influenced mainly by the year-on-year fall [in the number] of entrepreneurs by 4.9 percent, to 350,000,” the office said adding that the number of employees increased by 0.8 percent.

The number of self-employed people who are classed as dependent – i.e. who work most or all of the time for one client – dropped by 6.7 percent year-on-year to stand at 97,000, the Statistics Office said.

The higher share of joblessness compared to previous quarters could be the result not only of declining seasonal work but also changes to the Labour Code, which might have brought forward potential layoffs from the beginning of 2013 to the end of 2012, Poštová Banka analyst Eva Sadovská said, adding that laying people off earlier was cheaper for many employees.

Baláž too said he believes that the growth in unemployment was linked not only to the economic slowdown but also to the Labour Code revision, which prompted companies to lay off employees sooner in order to reduce the costs of severance.

The average nominal monthly salary in Slovakia for the whole of 2012 reached €805, a rise of 2.4 percent compared to 2011. However, when inflation was taken into account, average real wages fell in 2012 by 1.2 percent.

The average nominal monthly salary reached €875 per month in the final quarter of 2012, meaning that year-on-year pay growth was 3.2 percent for the quarter, the Slovak Statistics Office reported. Again, once inflation was taken into account, this represented a fall in real wages, by 0.3 percent.

In the last quarter, wage growth was slightly stronger than expected, according to Sadovská, who said that “some employees may have chosen to pay bonuses at the end of the 2012 rather than in early 2013, when higher payroll taxes started being applied in the case of higher payments”.

Sadovská noted that the average nominal monthly salary in the economy for the whole year exceeded €800 for the first time in Slovakia’s history.

The way that economic sentiment indicators have been developing so far this year suggests that 2013 will not be marked by strong economic performance. However, a recovery in Germany might give Slovakia a positive boost, according to market watchers.

“Our economy will not this year have the one-off support in the form of massive investments in the automotive industry that was the case last year,” Baláž said. “Part of the growth will also be eaten away by ongoing fiscal consolidation.”

Koršňák said he thinks that Slovakia might experience some revival in growth as early as the first half of the year, based on the revival of the German economy, its most significant trading partner.

“Even this year, the economy will be entirely propelled by foreign demand, while a more significant revival in domestic demand can be expected at the end of the year at the latest, but most probably only next year,” said Koršňák, who predicted that the economy would grow by 1.5 percent in 2013.

Based on EU data the most significant quarter-on-quarter growth in the last three months of 2012 was posted by Latvia, at 1.3 percent; Estonia, at 0.9 percent; and Lithuania, at 0.7 percent. By contrast, Portugal’s economy experienced the sharpest fall, of 1.8 percent, followed by Cyprus and Slovenia, which both contracted by 1 percent, Eurostat reported.