“I AM SORRY if the minorities got me wrong,” Prime Minister Robert Fico said in response to the criticism that his fiery address to mark the 150th anniversary of the establishment of the state-funded cultural organisation Matica Slovenská evoked among minorities living in Slovakia. Yet the prime minister does not plan to apologise, based on statements he made during an interview with Slovakia’s main Hungarian-language daily, Új Szó. 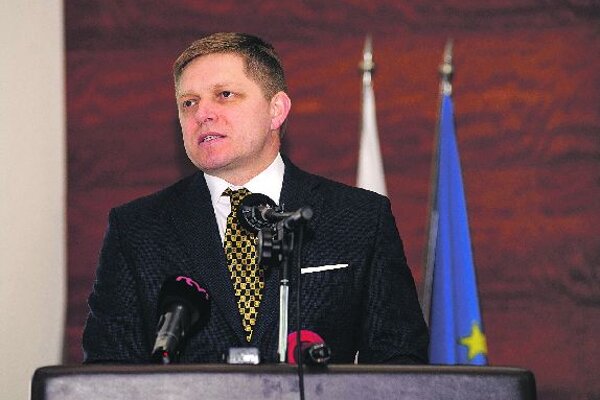 “I AM SORRY if the minorities got me wrong,” Prime Minister Robert Fico said in response to the criticism that his fiery address to mark the 150th anniversary of the establishment of the state-funded cultural organisation Matica Slovenská evoked among minorities living in Slovakia. Yet the prime minister does not plan to apologise, based on statements he made during an interview with Slovakia’s main Hungarian-language daily, Új Szó.

“We did not establish our independent state in the first place for minorities, although we do respect them, but mainly for the Slovak state-forming nation,” said Fico on February 26, adding that he had detected what he called a “strange tendency to put forward the problems of minorities” to the disadvantage of the Slovak nation “as though Slovak men and women do not live in Slovakia at all”.

Fico also said that some minorities have been trying to “blackmail” the state via the issue of minority rights: “be it the Roma, [or] people of a different orientation, minority of opinion or ethnic [minority]”, the Sme daily reported.

Peter Pollák, the government’s proxy for the Roma community, said he was taken aback by Fico’s statements, while government plenipotentiary for national minorities László Nagy commented that he noticed a significant difference between what the government declared in its programme and in the February 26 statements by the prime minister. It is a pity that Fico failed to list any specific examples of alleged disloyalty on the part of minorities, Nagy said, according to Sme.

Just days after Fico made his speech, Új Szó published an interview with the prime minister in which he claimed that his words had been misunderstood and was at pains to insist that his criticism was actually targeted at just one particular minority and focused on one particular case – though he refused to specify either the minority or the case.

“As far as my statements are concerned, which – senselessly – were instantly used as though there were explosives in them: at the meeting of Matica Slovenská I was responding to a specific happening,” Fico said. But despite being pressed by the Új Szó reporters, he refused to explain what “specific happening” he was referring to.

“I am not an old gossip and at public meetings I do not gossip about what happened in association with a specific minority’s project financing,” said Fico. “I simply generalised and said I did not like that.”

Fico, during the Matica Slovenská event, also said that it is becoming a tradition for minorities in Slovakia to be seen with outstretched hands pressing their demands, but “without any responsibility towards the state” and without what he called a “cultivation of civic virtues”.

Journalists immediately turned to Foreign Minister Miroslav Lajčák, who is also head of the government’s council for human rights, national minorities and gender equality, to clarify whether Fico’s statements represented a change in the government’s policy towards minorities. Lajčák’s response was that one should not “paint scarecrows on the wall” and then be frightened by them, but should instead look at what the government has done in this sphere and its approach in the area of minority rights, the SITA newswire reported.

Lajčák stated that Fico’s statements did not complicate his work: “I am a big enough boy to know what to pass by and what complicates my work”. Lajčák insisted that the government’s approach towards minorities is not changing.

Laco Oravec, programme director of the Milan Šimečka Foundation, a think tank, suggested that Fico’s remarks were aimed at voters and would not reflect the actual policies that he intends to pursue. However, Oravec added that such rhetoric can potentially “deepen hatred in our country”, public broadcaster Slovak Radio (SRo) reported.

Fico’s words did not surprise Grigorij Mesežnikov, president of the Institute for Public Affairs (IVO) think tank. The analyst said his words were consistent with what he presented when he was first prime minister in 2006-2010, when he ruled in a coalition with the hard–line nationalist Slovak National Party (SNS) and the nationalist-populist Movement for a Democratic Slovakia (HZDS).

“These statements are in line with how he sees the problem of minority relations and how he sees interaction between the majority and minorities, so in this respect it did not surprise me,” Mesežnikov told The Slovak Spectator.

However, according to Mesežnikov, what should prompt more careful attention is that these statements, which he described as “relatively radical”, came after a fairly calm year, one absent of major political confrontations over minority issues.

As to whom Fico was primarily referring to, Mesežnikov suggested that the prime minister may have had the Hungarian minority in mind since it is politically the strongest minority, but that he might also have wanted to lash out at the Roma minority.

Fico has previously addressed critical remarks towards the Hungarian minority, but was also quite critical about the Roma minority soon after the establishment of his Smer party. “Thus I assume that his words were intended primarily for these two minorities”, Mesežnikov said.

Fico’s February 26 talk prompted the chairman of the European People’s Party (EPP) caucus in the European Parliament (EP), Joseph Daul, to describe them as “unacceptable”.

“In today’s Europe there is no room for such statements,” Daul said, as quoted by Sme, on February 28.

Instead of reproaching minorities, Fico should focus more promptly on solving domestic economic problems and the drastic increase of unemployment in his country, said Daul, according to the TASR newswire.

Meanwhile, the non-parliamentary Party of Hungarian Community (SMK) said that the leader of the social democrats in the EP, Hannes Swoboda, disagrees with Fico’s statements, as he suggested in response to a letter written to him by Edit Bauer, a Slovak MEP representing the SMK, TASR reported on March 5.

“The statements are untrue and come as an insult to the Czechs living in Slovakia,” said Dagmar Takácsová, chairwoman of the Czech Association in Slovakia in Košice and a member of the Committee for National Minorities and Ethnic Groups.

Slovak MEP Monika Flašíková-Beňová, who is a member of Fico’s Smer party, said on March 4 that she would have chosen different words, while adding that she was not present at his speech and did not know in what context Fico had made it. She stated: “On my behalf I can say that minorities should be respected in a country and that the relationship of the majority towards the minorities reveals the state of the whole society”, SITA reported.

Flašíková-Beňová said that she did not know why Fico had chosen the words he had used.

No slip of the tongue

“I am of the opinion that it was not accidental,” Mesežnikov said in response to Fico’s comments, adding that the timing of Fico’s speech was linked to the fact that the current socio-economic situation in Slovakia is not good. “Thus the intention was to divert attention and point to something which is important in terms of gaining support for the Smer party.”

According to Mesežnikov, this is why Smer played the ‘nationalism card’ before the parliamentary elections in 2010. Since the elections in 2012 Smer has not needed to play this card to mobilise people since it has enjoyed an overwhelming majority in parliament, Mesežnikov said, adding that now, however, the economic situation is worsening, which is probably leading Fico to assume that the minorities theme can be used to neutralise the impact of this.