Psychiatric community willing to back Malinová

THE CASE of Hedviga Malinová (who has since married and is now called Žáková), which has been going on since 2006, has now gained the attention of the international psychiatric community. Prosecutors brought renewed attention to the case in 2012 when they requested that Malinová undergo psychological testing. 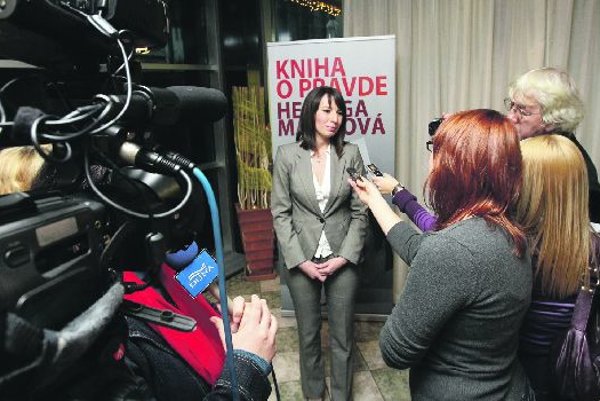 THE CASE of Hedviga Malinová (who has since married and is now called Žáková), which has been going on since 2006, has now gained the attention of the international psychiatric community. Prosecutors brought renewed attention to the case in 2012 when they requested that Malinová undergo psychological testing.

Psychiatrists from six countries (the UK, Germany, the Czech Republic, Hungary, Austria and Slovakia) agreed during a psychiatry conference held in the western-Slovak spa town of Piešťany in early March 2013 that they would request the World Psychiatric Association to examine Malinová’s case unless Slovakia’s official bodies stop demanding that she be subjected to further psychological testing, the Sme daily reported following the conference.

An international team of 13 experts worked with the documentation of the case during the conference and heard from Malinová and her psychiatrist, Jozef Hašto, in person. The team came to the conclusion that the diagnosis of and treatment for post-traumatic stress disorder that Malinová suffered after the attack in 2006 was correct.

“Further checks cannot bring new information and are thus unjustified,” said Czech psychiatrist Petr Smolík, as quoted by Sme. “Malinová faces the threat of re-traumatisation and thus she should not be examined by experts against her will and exposed to the threat that she will be examined in a hospital.”

According to experts, such a threat bears the signs of political abuse of psychiatry, Sme wrote.

Over the past six years the Malinová case has become one of many disputes negatively affecting Slovak-Hungarian relations within and beyond Slovak borders.

Malinová, a Hungarian-speaking Slovak citizen, reported that she had been assaulted on her way to a university exam in Nitra in August 2006. The police said that their investigation into the case, involving over 250 officers and interviews with 600 people, led them to conclude that an assault never occurred.

The police’s findings were released on September 12, 2006, at a press conference by then interior minister Robert Kaliňák and then prime minister Robert Fico (both of whom currently hold the same positions), with Kaliňák stating “it is beyond doubt that the case did not happen”. He presented several pieces of alleged evidence, including DNA samples, to support his assertion. Kaliňák later went on to denounce Malinová as a “pathological liar”.

Malinová was then charged in May 2007 with perjury and making false claims. However, the charges have yet to be presented before a court and after more than five years the case is still pending with the General Prosecutor’s Office.

Malinová’s attorney, Roman Kvasnica, said on August 24, 2011, that he believed that nobody would ever properly investigate who attacked his client.

“The state of affairs clearly shows that since 2006, when the attack on Hedviga Malinová happened, the Slovak state bodies have absolutely failed,” he said, as quoted by the TASR newswire.

Various actors on the Slovak political scene have blamed each other for politicising the case since it first emerged. Malinová, who is still officially charged, did not see her case resolved even after a change of government when Robert Fico was replaced by Iveta Radičová following the 2010 general election.

However, there was a development during the Radičová government, just before the end of its (shortened) term, when the government agreed to formally apologise to Malinová before the European Court of Justice (ECJ) at the beginning of 2012.

The text of the settlement reads that the government does not explicitly admit that the state harmed Malinová during the criminal investigation, but it does state that certain circumstances around the case raise doubts in terms of respect for Malinová’s rights as guaranteed by the European Convention on Human Rights.

In return, Malinová promised she would not sue the country before the European Court for Human Rights (ECHR) in Strasbourg for what she had called errors made during the investigation that failed to guarantee her fair treatment, Sme reported in January 2012.

Yet, Kaliňák, who was reappointed to the post of the interior minister after the March 2012 elections, criticised the apology, saying that he considers it “inadequate and scandalous since the whole investigation showed the exact opposite”, Sme wrote.
Belated examination

The General Prosecutor’s Office requested the evaluation of Malinová’s mental health in June 2012.

The district court in Nitra issued the order for a psychiatric review of Malinová based on a motion from the prosecutor’s office which posed 15 questions for the psychiatric experts to answer, such as whether Malinová suffered from a mental disorder in August 2006. The court stated the purpose of the review was to verify the findings of Malinová’s doctors, László Sárközy and Jozef Hašto, made shortly after the attack.

Malinová and her attorney, Roman Kvasnica, objected, saying that the prosecutors were seeking to examine the mental state of Malinová in 2006 even though the court order only deals with Malinová’s current state of mental health, the Sme daily reported in June 2012.

When Malinová refused to be examined at an outpatient clinic, prosecutor Jaroslav Kozolka requested that she be hospitalised for the purposes of an extended examination in August 2012.

“She refuses to testify as an accused [person] and they cannot force her to do so even if the psychiatrist poses the questions,” said Kvasnica at that time, as quoted by Sme. He added that his client would not talk with anybody selected by the current General Prosecutor’s Office. Later in October 2012 the Nitra Regional Court dismissed the appeal filed by prosecutor Kozolka, who had argued that an examination of Malinová at an outpatient clinic would be insufficient.

The General Prosecutor’s Office did not comment on the recent statement of the international team of psychiatrists, which will be delivered to the Slovak Psychiatric Society and the World Psychiatric Association.

“The General Prosecutor’s Office will not comment on the matter, since it is not familiar with the conclusions of the conference, nor who organised it and for what purpose and which experts participated in it,” the office’s spokesperson Andrea Predajňová told Sme, adding that the General Prosecutor’s Office requested the examination by experts in the Malinová case based on a court order.