DOZENS of Roma citizens, most of them from eastern Slovakia, took part in a protest march through Bratislava on March 6 organised by the Party of the Roma Union in Slovakia (SRÚS). They asked the government to secure them work and a dignified life, the TASR newswire reported. 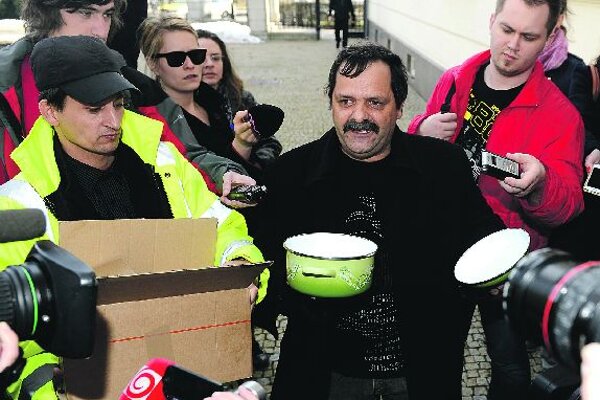 DOZENS of Roma citizens, most of them from eastern Slovakia, took part in a protest march through Bratislava on March 6 organised by the Party of the Roma Union in Slovakia (SRÚS). They asked the government to secure them work and a dignified life, the TASR newswire reported.

“The Roma population is at the very bottom of society,” said František Tanko, chair of the SRÚS, as quoted by TASR. He added that though the governing Smer party had promised “certainties” during its election campaign, the opposite was true and the situation for Roma was bad.

“This problem cannot be put off any longer because sooner or later it will explode – and it is only a matter of time when. Roma do not only want to receive welfare payments, they want to work,” Tanko added.

The march started in front of the Ministry of Labour, Social Affairs and Family, from which it continued through the city. It ended in front of the Government Office, where the protesters left a gift for Prime Minister Robert Fico: an empty kitchen pot, symbolising “how citizens of this country are dying of starvation”, Tanko explained.

The protesters wanted to meet both Labour Minister Ján Richter and Fico in person. But on the day of the protest the prime minister was attending a summit of Visegrad Group (V4) countries in Warsaw. Labour Ministry spokesperson Michal Jurči said that Richter was too busy to meet the Roma representatives at the time they proposed, TASR wrote.

Roma have a right to be unhappy, as their problems have been ignored for 20 years by everyone, said Peter Pollák, the government proxy for Roma communities and an MP for Ordinary People and Independent Personalities (OĽaNO). But he added that while he welcomed the initiative, it is necessary not only to protest but also contribute to the discussion with specific and constructive solutions.

“Although Mr Tanko draws attention to this issue, he did not come to parliament on Monday [March 4], when he had the chance – just like everyone else – to participate in the discussion over the Roma Reform,” Pollák said, as quoted by TASR.

The government proxy added that tackling Roma joblessness is a priority of the government’s reform package, as resolution of the problem would help not just members of the minority but the whole of Slovakia.

The March 6 demonstration passed off calmly. Tanko said that it would not be the last such protest, and that Roma would return to Bratislava in even greater numbers, the SITA newswire reported.