IF THE LANGUAGE barrier has previously acted to prevent kyogen, a traditional form of Japanese theatre, from appealing to audiences in Slovakia, then a performance on February 24 in the Astorka Korzo Theatre in Bratislava went some way to help locals finally access it. Two pieces of this ancient Japanese comedy genre were performed in Czech (with some Japanese), making them more understandable – but also more surprising and unusual. 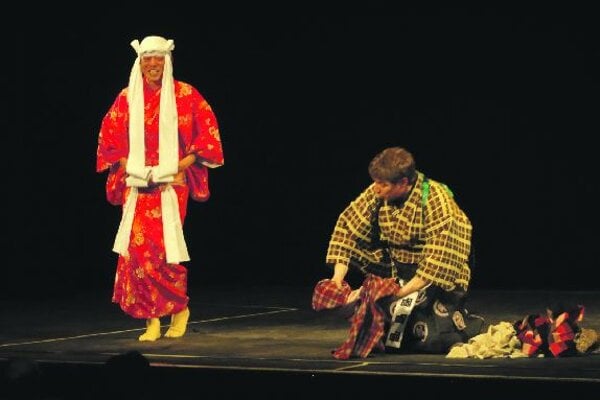 IF THE LANGUAGE barrier has previously acted to prevent kyogen, a traditional form of Japanese theatre, from appealing to audiences in Slovakia, then a performance on February 24 in the Astorka Korzo Theatre in Bratislava went some way to help locals finally access it. Two pieces of this ancient Japanese comedy genre were performed in Czech (with some Japanese), making them more understandable – but also more surprising and unusual.

The evening comprised performances of Busu (The Delicious Poison), a traditional piece dating back to at least the 12th century, and Susugigawa (The Washing River), a more modern piece resembling a medieval French farce.

The show was another in a series of events marking the 20th anniversary of diplomatic ties between an independent Slovakia and Japan. After the Day of Slovak-Japanese Friendship which took place on January 26 in Bratislava’s Primatial Palace – including a traditional tea ceremony, tasting of Japanese food, a lecture on Japan by former Slovak ambassador to Japan Peter Vršanský, a concert of music played on a traditional shamisen instrument, and presentation of a Nissan electric car – the kyogen theatre was an attempt to show some aspects of Japanese tradition, but also contemporary culture, to the wider public. Admission to the performances at the Astorka Korzo theatre was free.

“It is not that easy to get to see true kyogen theatre in Japan, either,” Master Motohiko Shigeyama, the tutor, director and actor of the Malé divadlo kjógenu / Small Theatre of Kyogen based in the Czech city of Brno, said in his introduction to the performance. “Kyogen is often just a mere issue in textbooks for pupils, a mere theory. But it is a comedy form and it is best to learn it from first-hand, real-life experience. Kyogen is said to be the oldest national theatre genre, appearing in Japan 600 years ago,” he continued.

He demonstrated the distinct, stylised acting expressions typical of this form, which makes it unique and which distinguishes it from the more solemn, serious and dramatic Noh theatre – although the two have some features in common. Shigeyama explained why the actors had to act loudly and use understandable expressions: kyogen had to be played outside, to large audiences. The kyogen master also explained why this stage was simpler than for a normal performance, and what some of the actions, typical for kyogen but unusual for modern audiences, mean.

Busu is a simple play featuring three characters: a lord who leaves his home and, fearing that his two servants might eat his precious treat, a piece of sugar (valuable in ancient times), persuades them that the box in fact contains a dangerous poison that might kill anyone who even smells it.

Predictably, the servants are attracted to it and in the end not only smell it, but eat it all.

Fearing the wrath of their master, they come up with an explanation that turns out to be watertight.
Susugigawa is one of the most popular kyogen plays, first performed only in the 1950s. A husband, who is an orphan and is tolerant of the high-handedness, moods and laziness of his wife and mother-in-law, is a popular subject of mockery as well as compassion. He is henpecked and gradually does all the household chores, gardening, etc. But when he gets a list of his duties and is spurred by his in-laws to work faster, he decides to revolt and lets his wife’s most beloved kimono swim away with the stream. The wife tries to save it, and starts to drown. The husband uses the situation to improve his status and make the most of saving his wife’s life.

The combination of traditional Japanese expressive forms (recalling Italian commedia dell’arte) and Czech words spoken by evidently Slavic actors was at first shocking, but after some time rather amusing and intriguing. The simple plot was understandable for all, such that even the Japanese guests in the audience were able to follow it. Instead of quick verbal exchanges and sophisticated conversation, stress was laid on repeating the lines several times with distinct intonation, on traditional moves – resembling those from martial arts – and on the peculiar, slightly archaic, but understandable language.

Motohiko Shigeyama, the Japanese Embassy wrote on its website, is the grandson of Sensaka Shigeyama, who was pronounced Nongen Kokuhó (a Living National Treasure of Japan) and the eldest son of Shime Shigeyama, who brought kyogen to the Czech Republic and has been patron of the Malé divadlo kjógenu (www.kjogen.cz) since 2000. He has been trained and active in kyogen since he was three years old. In 2009, Motohiko accepted the role of guide in a cyclo-travelogue across the Czech Republic, the popularity of which was enormous in Japan.

“My father came to the Czech Republic for a workshop several years ago,” he told The Slovak Spectator. “These actors were students then, and started taking an interest. For more than 10 years they have been trained by my father. Maybe the crucial point was that since the beginning, the students were very passionate and wanted to continue learning kyogen.”

Asked about the European public’s reactions, Shigeyama answered that the Czech performance of kyogen is something like Japanese dancers in a classical Russian ballet, adding that the visitors in Brno are very friendly and look forward to new performances. He added that there are regular stagings there, twice a month.

Shigeyama said that in the last five to ten years, audiences in Japan have started to discover kyogen and revisit it. But he added that it was his presence on national TV that had boosted interest in the art form. As for the length of the performances, he revealed that they are flexible to arrange, depending on the circumstances (in Bratislava, they were each about 30 minutes long). He said he and his family were trying to create a new tradition of more modern kyogen.

One of the Czech performers, Igor Dostálek, asked by The Slovak Spectator about how kyogen had come to be acted in Czech, said: “Such a phenomenon happens maybe once in 300 years, without exaggeration. When I studied acting at the Janáček Academy of Music and Performing Arts in Brno, Hubert Krejčí, the ‘enfant terrible’ of Czech drama, appeared there: a playwright, mime, actor, and lecturer with really cruel methods. But in spite – or maybe because of – being very strict and stern, he was able to spellbind us: both with stylised theatre (grotesque, buffoonery, commedia dell’arte) and with kyogen, which he described as a centuries-old tradition that is, at the same time, very vivid and contemporary. So after we got a taste of it, we didn’t let go.”

Dostálek added that the crucial moment for bringing kyogen to the Czech lands was meeting Shime Shigeyama. The combination of Krejčí, who doesn’t look like a high-society nobleman but is able to enthuse people, and Shime Shigeyama, who is very friendly, unofficial and informal (considering his position as one of the top kyogen performers among his 127 living peers), partly thanks to his years outside the branch, produced this surprising result. The enormous interest in kyogen on one side that prompted Krejčí to ask about it – at the Shigeyama production of kyogen in Prague – and openness, willingness and eagerness on the other side brought about the first workshop in the Czech Republic in 2001 and, since then, the cooperation has continued. He said that apart from Ondřej Hýbl, who found kyogen through Japanese studies, all the other kyogen performers in the Brno theatre are actors who have been enthralled by this traditional Japanese genre.

The 20th anniversary of Slovak-Japanese diplomatic ties will bring a whole year of events, which can be followed via the embassy’s website.