Close, but still getting closer

WHEN Markus Wuketich was growing up, close to the border that his homeland, Austria, shared with Czechoslovakia, he could always see Bratislava Castle and Petržalka’s blocks of flats, the so-called paneláky. 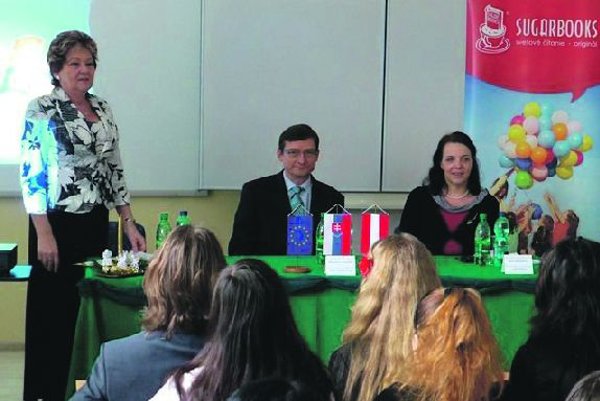 WHEN Markus Wuketich was growing up, close to the border that his homeland, Austria, shared with Czechoslovakia, he could always see Bratislava Castle and Petržalka’s blocks of flats, the so-called paneláky.

“It was very close but at that time, under the communist regime in Czechoslovakia, still beyond reach,” the Austrian ambassador to Slovakia, Wuketich, told a group of students from the secondary health-care academy in Rožňava when explaining how neighbouring countries can be geographically very close but also, in a sense, quite far. “When I grew up there still was an iron curtain.”

Wuketich explained that prior to the Velvet Revolution in 1989, for many Austrians it was not impossible to travel to the territory of present day Slovakia, “but it was not a pleasant experience” since it involved long waiting times and border controls.

“You always had the impression that it was the end of the Western world,” explained Wuketich, who was participating in Bringing the World to the Classroom, a project developed by The Slovak Spectator, several foreign embassies in Slovakia and Sugarbooks, a distributor of textbooks. “We had developed a mental geography: places which were close were also very distant for us.”

Wuketich was quick to note that those memories stand in such sharp contrast to what Slovaks and Austrians have today: “we both had to go through the learning process in order to erase those artificial barriers that communism created”.

According to the Austrian ambassador, the tremendous changes gave people in Austria a sense of euphoria, but also a sense of insecurity, and they “had to come to terms with the change since all of a sudden all these distant countries became close”.

Responding to the students, who in their essays noted that Austria and Slovakia share a common history, Wuketich said that while history can be a unifying force, it has also at some points in the past divided geographical neighbours.

Nevertheless, today both Austria and Slovakia belong to the inner core of the European Union while being eminent economic partners, said Wuketich, noting that Slovakia is Austria’s 11th most important trading partner. He remarked that Austrian businesses were the first to invest in this region of Europe, and today Austria is the 2nd biggest investor in Slovakia, with 2,000 Austrian companies active in the country.

The ambassador also noted that as for the fate of smaller countries and their neighbours, if they want to progress, they must cooperate and find a common approach to the most crucial foreign policy issues. Wuketich added that it does not mean that the countries have to agree on everything:

Slovakia and Austria differ on nuclear safety issues while opposition to nuclear power “is deeply rooted in the Austrians’ soul”. Nevertheless, nuclear power is an important component of Slovakia’s energy security.

When explaining to the students how the physical borders between the countries have gradually disappeared, Wuketich noted that a considerable number of Slovaks currently work in Austria, many Slovak students study at Austrian schools and universities and numerous Slovaks own houses and plots of land in Austria’s border regions.

“A few weeks ago I learned that an Austrian farmer is delivering milk to a school in Bratislava,” shared Wuketich, citing one of the examples of how even small connections can contribute to the closeness of countries which were once quite distant because of historical circumstances.