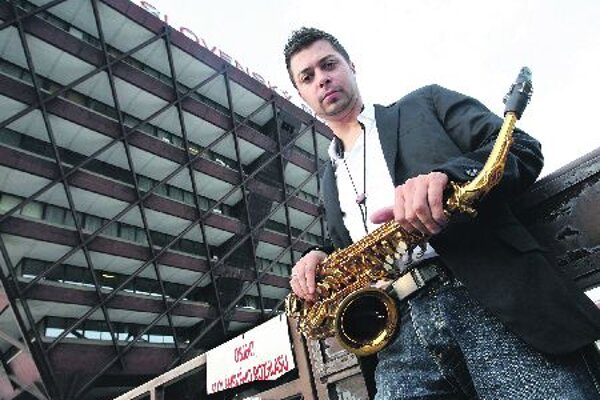 Bratislava
CONCERT: THE UNIQUE project Folklore to Jazz crosses borders and merges a traditional folklore band with a jazz quartet, with solos by saxophonist Radovan Tariška. Famous Slovak folk songs arranged in a jazz style will be performed in the Concert Studio of Slovak Radio, Mýtna 1 in Bratislava, on March 13 at 19:00. Part of the concert is the launch of the CD Folklore to Jazz! Performers will include Radovan Tariška (SK, saxophone; see photo), Benito Gonzalez (VE, piano), Essiet Okon Essiet (USA, bass), David Hodek (SK, drums), Tomáš Baroš (CZ, bass), Jozef Fečo (CZ, cimbalom and bass) and Stanislav Palúch (SK, violin). Tickets cost €15-€17 and can be obtained by calling 02/5727-3624 or via www.slovakradio.sk.

Bratislava
FILM: Woman Art Revolution – Accompanying the Zá-kaz dotyku / No Touching exhibition by Jana Želibská will be a screening of this US film by a female artist about the history of the feminist movement, praised by MoMA NY and shown at various festivals.
Starts: March 14, 18:00; ci-nema hall of the Slovak National Gallery, administration building, Riečna 1. Admission: €2. Tel: 02/2047-6270; www. sng.sk.

Spišská Nová Ves
EXHIBITION:THE GALÉRIA umelcov Spiša / Spiš Artists’ Gallery celebrated its 25th anniversary late last year and has organised a host of exhibitions to mark the occasion. From Jubilanti (work of nine authors celebrating anniversaries), through Z histórie / From the History 1987-2012, Akvizície / Acquisitions 2007-2011, to 25 x 25 and Terra Gothica, visitors can get to see an outline of the operation and achievements of the gallery, located at Zimná 46 in Spišská Nová Ves, Tuesdays to Saturdays until the end of March for an admission fee of only €0.50-€1. For more information, call 053/4464-710 or visit www.gus.sk.