SLOVAK senior officials, politicians and representatives of the church have joined those congratulating 76-year-old Argentinian cardinal Jorge Mario Bergoglio, who was elected pope on March 13 during one of the shortest conclaves in the history of the Catholic Church. As well as congratulations, they have already sent the new pope multiple invitations to come to Slovakia. 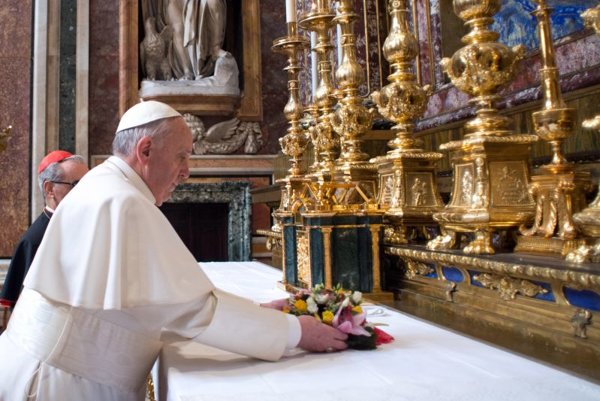 SLOVAK senior officials, politicians and representatives of the church have joined those congratulating 76-year-old Argentinian cardinal Jorge Mario Bergoglio, who was elected pope on March 13 during one of the shortest conclaves in the history of the Catholic Church. As well as congratulations, they have already sent the new pope multiple invitations to come to Slovakia.

Slovak President Ivan Gašparovič accepted the news of the election of the new pope, who chose the name Francis, with what he described as “pleasure”, saying that he hopes his papacy will contribute to the further deepening of bilateral relations between Slovakia and the Vatican, according to an official press release.

“The world knows you as a person dedicated to faith and God, and with hope expects you to be the advocate of dialogue, the carrier of values and the protector of peace, solidarity, justice and the human rights of every individual,” Gašparovič wrote in an official letter that he sent to the new pope.

He stressed that since the world currently faces several challenges, it needs every individual to participate in the restoration of morality and real values, and that Francis’ experience and inner strength “will significantly contribute to looking for the right way to the moral restoration of mankind, and the development of cooperation, tolerance and understanding between the nations”.

The president also expressed the hope that the new pope will “spread the values of Christianity, love and good in the world”.

Prime Minister Robert Fico also congratulated Pope Francis on his election, wishing him “health, and good and wise decisions during his pontificate”.

Both politicians invited Pope Francis to Slovakia to mark what they called “the important anniversary of the arrival of Saints Cyril and Methodius to our territory”.

Francis’s predecessor, Benedict XVI, did not visit Slovakia during his time as pope. He received several invitations, most recently to attend this year’s celebrations of the 1150th anniversary of the arrival of Ss Cyril and Methodius.

The chair of the Conference of Bishops of Slovakia (KBS), Archbishop Stanislav Zvolenský, said that he was surprised by the new pope’s rapid election, adding that it is good to know that the Catholic Church has a pope again, the TASR newswire wrote.

Zvolenský added that the KBS would like to invite the new pope to Slovakia even before the July celebration of the arrival of Ss Cyril and Methodius. He said that the visit should take place in Easter. Benedict XVI also received a similar invitation, but was not able to pay a visit to the country, TASR wrote.

Auxiliary Bishop of Bratislava Jozef Haľko said that it is obvious that the new pope is a man of prayer, since the first thing he did when he appeared in public was to recite the Lord’s Prayer and Hail Mary with believers in St Peter’s Square, TASR reported.

Roman Catholic priest Anton Srholec said he considers Pope Francis to be a sign of change, since his record indicates “the church will emphasise modesty, and that there will be more focus on the poor conditions in which hundreds of millions of people all around the world live”, TASR wrote.

Srholec also said he hopes that the actions of Pope Francis will be an impulse for change in the Catholic Church in Slovakia, and that its leaders will have to “abandon the symbols of luxury, get out from the bishop’s palace, and approach people in a way that is more persuasive to people suffering from unemployment, living in poverty or who lack [things]”.

Another Catholic priest, Marián Gavenda, predicted that Pope Francis would bring the vitality of Latin America to a “Europe which is dying out”. He said that it is important that he comes from the family of a railwayman since he can better understand the problems of ordinary people, the SITA newswire wrote.

“Though he is a Jesuit, he has a Franciscan spirit,” Gavenda told SITA. “His simple civility is a good signal.”