ONE year after Smer took the country in a landslide history, the Prime Minister Robert Fico described the current situation of his government, with unemployment reaching almost 15 percent in January, its highest level since 2004, as the most difficult period in his political life.Nevertheless, Fico insists that Slovakia has a stable government, and that it enjoys widespread support from the public and is free of scandals. The opposition parties argue that instead of the ‘certainties’ and jobs that Fico had promised, people are saddled with high jobless rates, and pundits detect a worsening atmosphere in society. 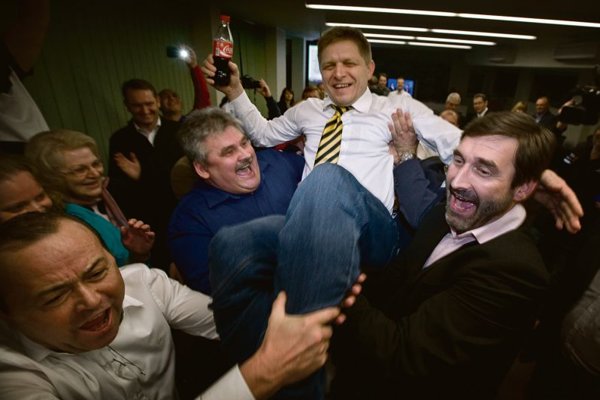 ONE year after Smer took the country in a landslide history, the Prime Minister Robert Fico described the current situation of his government, with unemployment reaching almost 15 percent in January, its highest level since 2004, as the most difficult period in his political life.
Nevertheless, Fico insists that Slovakia has a stable government, and that it enjoys widespread support from the public and is free of scandals. The opposition parties argue that instead of the ‘certainties’ and jobs that Fico had promised, people are saddled with high jobless rates, and pundits detect a worsening atmosphere in society.

“God save this country from having a mash-up [a reference to the four-party centre-right coalition that formed the previous government],” Fico said on March 8 as quoted by the SITA newswire, adding that he could not imagine how such a coalition would have made the decisions which “we have taken on our shoulders and are vital for Slovakia”.

Fico said he stands behind the decisions his government has made to consolidate the public finances: “There are only two alternatives: we either walk the path of higher taxes for the rich and strong, or the way of hiking VAT, which will be paid by the people and reflected by massive price hikes, which we reject.”

Instead of the ‘certainties’ and jobs that Fico had promised voters during the 2012 election campaign, the country is enduring record unemployment, while promises of higher taxes for the rich have changed into higher taxes for all, Ján Figeľ, leader of the opposition Christian Democratic Movement (KDH) told SITA.

Political scientist Miroslav Kusý sees the climate in society as having worsened since the parliamentary elections.

“It is a natural result of the economic crisis, but also the attitude of the government, which continues especially in the sphere of economics in a way that increases unemployment and creates social insecurity,” Kusý told The Slovak Spectator.

Fico insisted that if his government has made any mistakes, it is ready to make corrections.

“But someone has to prove it,” Fico said as quoted by SITA, adding that so far no one has come forward saying that “you have made a mistake here and this is causing serious problems in the economy”.

The government blames the gloomy unemployment numbers on the slowing economy, while the opposition blames the government for measures that it says have negatively affected the flexibility of the labour market, including a recent revision of the Labour Code.

“It is not true if someone claims that the level of labour-legal protection in the Labour Code or tax changes have had an impact on the tempo of unemployment growth,” Fico said.

A recent poll conducted by the Focus poling agency suggested that the ruling Smer party would have collected 34.6 percent of the vote if a general election had taken place in the first half of February, down slightly from January, when the party received 36.9 percent in a similar poll. Yet, compared to the 44.4 percent which Smer won in March, 2012, it represents a considerable drop in support.

Martin Slosiarik from Focus said that the 10-percentage point drop is significant, adding that “the situation looks even more dramatic if you compare it with the first post-election results, in which Smer reached an approval rating of 50 percent”.

For Ján Baránek, a sociologist working for Polis, after the initial high approval rating, the perceived drop does not have dramatic significance: “what is rather dramatic is that it seems it is a trend and it might continue. The question however remains where it stops”.

A Polis poll on March 6 suggested that Smer’s approval rate stood at 39 percent, but with that equating to 75 seats it would be one seat short of a majority, according to SITA.

Pavel Haulík, head of the MVK polling agency, chose not to comment on the recent Focus poll, which measured a relatively significant drop for Smer, adding that the last survey done by his own agency recorded a much gentler fall for Smer.

“I think the changes which have emerged since the elections have not been significant enough for us to talk about important trends,” Haulík told The Slovak Spectator.

Haulík also said that a drop in support for the ruling party one year after the elections is a relatively normal trend because “parties more or less calculate that if they want to carry out some unpopular measures, then they do this at the beginning of the ruling cycle”.

However, Slosiarik noted that when comparing Smer’s approval ratings after the elections in 2006, when the party received more than 29 percent of the vote, after a year in power the party’s approval rating actually increased.

“Thus it is not a general rule that approval of the ruling party or parties must necessarily drop after one year of rule,” Slosiarik said, adding that Smer is in a unique situation.

Haulík claims an interesting trend that has emerged is that 60 percent of Smer supporters say that post-election developments have been much worse than they had been expecting.

“These are the risks that Smer will continue to face,” said Haulík, adding that as of mid March he could not talk about a major decline, since MVK’s numbers have not indicated anything like that yet.

Slosiarik attributes Smer’s decline in approval ratings to a mixture of what he calls the exaggerated expectations of Smer voters and Slovakia’s current economic situation.

“With its exaggerated emphasis on social certainties Smer has provoked unrealistic expectations from its voters,” Slosiarik said, adding that these expectations include lower unemployment, improvement or preservation of the standard of living, lower or unchanging payroll tax burden, etc. “Which of these has Smer been successful at fulfilling?”

Slosiarik admits that there is an objective economic context, however, adding that “people do not want to look at the complexity of the whole system; they want their work, pensions, schools, kindergartens, transport infrastructure and health care”.

As for the groups of voters most likely to depart from Smer, Slosiarik said that surveys show these are not only the typical supporters of social-democratic parties, like blue collar voters with lower economic status, but that today Smer is also losing out among younger to mid-generation voters with higher education and better income. Smer has so far not managed to address the issue of unemployment among young people, he added.

Pensioners remain the most loyal supporters because phenomena like unemployment impacts them the least, Slosiarik said.

As for where the departing voters go, Baránek told The Slovak Spectator that they first enter into the category of undecided voters: “here they remain for a certain time and then take their time to make a decision. While I am of course simplifying this process, they might opt for a different party or remain non-voters”.

When asked about the differences between the first and second Fico governments after the first year of the latter, Kusý said that the fundamental change lies in the fact that Fico is now ruling in a completely different situation.

“Back then [i.e. in 2006-2010] he entered power in a time of plenty; he had resources to draw and distribute,” Kusý told The Slovak Spectator. “Now the second government is in a period of very significant economic crisis and of course has a much narrower space in which to manoeuvre, primarily in the economic field.”

Kusý also noted that during his first government, Fico ruled in a coalition with the Slovak National Party (SNS) and the Movement for a Democratic Slovakia (HZDS), adding that “now it is an autocratic mono-government, so he rules alone. Thus he has no one to blame and all the responsibility is in his hands”.

Political scientist Marek Rybář, from the school of political science at Comenius University also pointed to the fact that Fico now rules alone and thus “political conflicts within the government are not as visible as within the previous one”. However, he added that even back then the conflicts did not pertain as much to the content of policies but rather to related corruption scandals, while the SNS and the HZDS ended up in a worse position because they were the weaker partners.

Today the prime minister has it much easier in terms of executing power, Rybář said.

Rybář does not see a fundamental change in Fico’s way of handling the opposition, though.

“Perhaps he pays more attention to not sounding very arrogant, but I do not see much change in the way he labels the opposition,” Rybář told The Slovak Spectator, adding that to a large degree Fico can afford to ignore the opposition because currently it does not represent any relevant political threat.