TWO GOLDEN medals that went to scientists of the Slovak Academy of Sciences (SAV) at the prestigious Taipei International Invention Show & Technomart 2012 (TIIST), and a device which can hide objects from magnetic fields and create the illusion of invisibility, were among the most distinguished successes in Slovak scientific research to have occurred last year. While Slovakia has managed to make scientific-related headlines on several occasions, leading scientific institutions such as the state-funded SAV, as well as the Slovak University of Technology (STU), consider the country’s funding of the sciences to be insufficient. 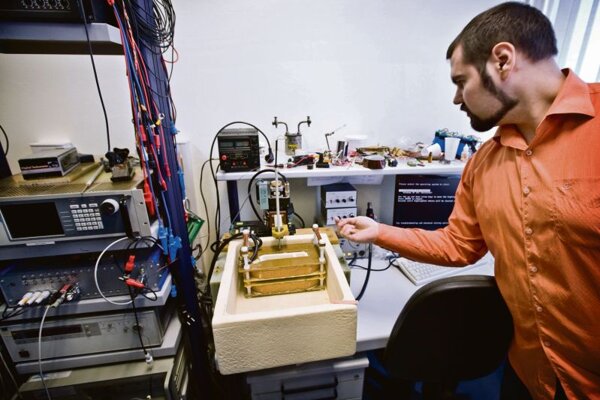 TWO GOLDEN medals that went to scientists of the Slovak Academy of Sciences (SAV) at the prestigious Taipei International Invention Show & Technomart 2012 (TIIST), and a device which can hide objects from magnetic fields and create the illusion of invisibility, were among the most distinguished successes in Slovak scientific research to have occurred last year. While Slovakia has managed to make scientific-related headlines on several occasions, leading scientific institutions such as the state-funded SAV, as well as the Slovak University of Technology (STU), consider the country’s funding of the sciences to be insufficient.

Based on the latest data by the European statistics authority Eurostat, in 2010, Slovakia spent only 0.63 percent of its GDP to fund scientific research and development, while the average funding of these fields in the EU stands at 2 percent.

STU rector Robert Redhammer noted that Slovakia is at the tail end of the EU in the area of funding scientific research and development, noting that the Czech Republic invests three times as much into science as Slovakia, and Hungary two and a half times more.

“The economic success of developed countries is determined by their abilities to innovate,” Redhammer told The Slovak Spectator, adding that crucial innovations mostly stem from university research oriented toward the need for practical application, and that by incorporating students into scientific research, the country fosters an important class of experts for the real economy and innovation. “Thus it is crucial for Slovakia to significantly increase financing of research at universities.”

Eva Majková, SAV Vice President for Research, agrees that funding science in Slovakia has been insufficient and ineffective in the long term.

An absence of clear and long-term scientific policies and priorities for what Slovakia needs and expects from research are factors that further illustrate the effect of low funding, Majková told The Slovak Spectator.

Spending on scientific research and development has grown annually by 10 percent in recent years, and in the past two years it grew by 25 percent on average, reaching €241 million in 2011, Michal Kaliňák, the Education Ministry spokesperson told The Slovak Spectator. He added that the ministry plans to increase the share of GDP intended for science to 1 percent per year.

Yet Kaliňák adds that an important part of spending on science is the funding provided by private businesses, which in 2011 reached more than €159 million.

Majková sees some hope in the creation of the Slovak Government’s Council for Science, Technology and Innovation, the advisory body which emerged on February 27, as well as the preparation of the Strategy for Research, Development and Innovations in the Slovak Republic until 2020, which is important for drawing EU structural funds.

The government’s strategy includes a proposal to increase state spending on research and development to 1 percent of GDP per year, and the basic condition to reach that goal is to reverse the contribution of public and private sources from 60:40, which is currently 40:60, according to Kaliňák.

Scientists from the SAV and Comenius University, one of Slovakia’s most prestigious universities, won five medals at the TIIST, which took place in Taipei from September 20 to 23, 2012. The gold medal went to the SAV Polymer Institute for its biodegradable and compostable polymers with high deformability, as well as to the SAV Electrotechnical Institute for its palladium-free gas sensor based on conductible polymers. Patent applications for the SAV’s inventions have already been filed, the TASR newswire reported.

Biodegradable polymers have already found their use in industry, namely as packaging for eggs, which is translucent like ordinary plastic packing, but decomposable like paper packaging, Forbes magazine reported in June 2012.

HrKo Holding Company, which owns poultry farms with around two million chickens in the whole of central Europe, started cooperating with the SAV Polymer Institute in the development of biodegradable and compostable polymers after it decided to create translucent and decomposable egg packaging. The innovation came as a response to the demands of supermarkets, which prefer paper packaging as it is more environmentally friendly, Forbes magazine reported in June 2012.

“We follow the philosophy that the customer should not buy a ‘cat in the sack’, since they cannot see the egg through a paper pack,” Vladislav Kozaňák, chairman of the HrKo Holding’s board said, as quoted by Forbes. “Plastic packaging is translucent but some chains did not want it due to its ecological burden. Therefore we needed to solve the dilemma of how to unite the proper attributes in one material.”

After several years of searching unsuccessfully for such material abroad, Kozaňák, when trying to find someone in Slovakia who could help him, received references to Ivan Chodák from the SAV Polymer Institute.

Chodák explained that the Polymer Institute, which cooperates with The Faculty of Chemical and Food Technology (FCHPT) of the STU, created biodegradable polymers which should hold in an ordinary environment as every other polymer, but in an environment where bacteria grow they degrade in a short period of time.

“If you throw our designed plastic pack into compost it will vanish in three months,” Chodák said, as quoted by Forbes.

Nowadays STU, together with various companies, is conducting operational tests to produce biodegradable polymer products to be used for packaging for things other than eggs, according to an STU press release from February 20.

The first project to be granted by the European Research Council to Ján Tkáč from the SAV Chemistry Institute involves Electrochemical lectin and glycan biochips integrated with nanostructures, Majková said when asked about the most noteworthy project the SAV is currently working on.

The project is aimed at characterisation and further application of biochips in deciphering glycocodes, which in practice could help to develop new natural vaccines and medications as an alternative to antibiotics. It could bring advances in diagnosing cancer, for example, TASR reported.

“Projects approved by the European Research Council belong among the most prestigious projects in the whole EU,” said Majková, explaining that the lack of such projects in Slovakia does not show the country in a positive light. “It underscores the importance of Dr Tkáč’s project even more.”

The experimental approval of the magnetic invisibility cloak, done by Fedor Gömöry and the team which published the project in the prestigious Science magazine, is cited by the SAV as the most important achievement of its scientific activities in 2012, according to Majková.

Though the original idea was developed by a team of Barcelona-based scientists, it was three Slovaks who confirmed the hypothesis through experiments, TASR reported.

The experiment to create a magnetic invisibility cloak was based on the fact that a specially designed cylindrical superconductor-ferromagnetic bi-layer can act as a cloak against static magnetic fields, TASR reported. The cloak could have medical uses, for instance, when a person with a cardiostimulator needs an examination requiring the use of magnetic resonance devices, according to Majková.

Outstanding Slovaks from science and technology

OVER the last 20 years Slovakia has become an automotive superpower, attracting three major car producers. But Slovaks also produce leading software products, and are masters in machine engineering and other industries. Here is a selection of some of them.

Ján Vilček – Slovak-born scientist received the 2011 National Medal of Technology and Innovation, the most prestigious award for technological development in the US. The 79-year-old Vilček received it for his pioneering work on interferons and key contributions to the development of therapeutic monoclonal antibodies.

Jaroslav Kuracina – Founder of Grand Power Company which has just marked its 10th anniversary, produces K-100 guns, used by armed units in the US, Russia, Germany and other countries.

Dominik Balogh – Balogh together with Pavel Serbajlo from the Czech Republic created M.dot application for mobile phones which helps people to create web pages via mobile phone. American company GoDaddy bought their start-up, which is the name for young business project with great potential, for $15 million.

Ivan Chodák – Scientist from the SAV Polymer Institute received the Education Minister's Award for Science and Technology for 2012, for his significant contribution to basic research of polymer modification with connection to its practical application.