FAR-RIGHT extremists marched through Bratislava’s centre, as they do every year in mid-March, to mark the anniversary of the establishment of the wartime Nazi-satellite Slovak state. A group of anti-extremist protesters, this year including Bratislava’s mayor, attempted to obstruct the extremists, but they managed to circumvent the blockade. A glossary of words as well as an exercise related to this article are also published online. 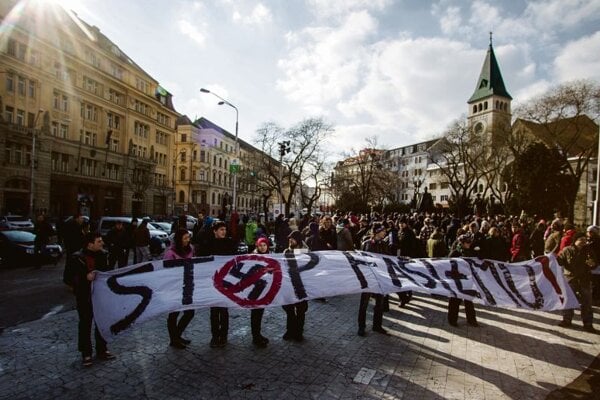 FAR-RIGHT extremists marched through Bratislava’s centre, as they do every year in mid-March, to mark the anniversary of the establishment of the wartime Nazi-satellite Slovak state. A group of anti-extremist protesters, this year including Bratislava’s mayor, attempted to obstruct the extremists, but they managed to circumvent the blockade. A glossary of words as well as an exercise related to this article are also published online.

Extremists gather in Bratislava every year on or around March 14 to mark the establishment of the fascist Slovak state in 1939, and in particular to commemorate its president, Jozef Tiso. This year their gathering took place on March 17 under the slogan ‘For A Free Slovakia’, officially protesting against Slovakia’s membership of the European Union, which they see as interfering with the state’s independence and sovereignty. The destination of the march was Tiso’s grave in Bratislava’s Martin Cemetery.

In response to the extremists’ march, another public gathering took place on the same day at SNP Square in central Bratislava. Reportedly up to 200 people gathered there to block the extremists’ path, including some notable Slovak public figures, such as Bratislava’s Mayor Milan Ftáčnik.
“I’m here because I consider it an expression of my civic attitude,” Ftáčnik told the SITA newswire. “My opinion is clear, I cannot support neo-fascism in any form. Bratislava should be a city where there are no grounds for this.”

Sociologist Elena Gallová Kriglerová from the Centre for the Research of Ethnicity and Culture (CVEK) placed a lot of importance on Ftáčnik’s appearance at the anti-extremism gathering, since support among public officials for such causes is largely lacking in Slovakia.

“It’s very important that Bratislava’s mayor came to publicly express his civic attitude in this way,” Gallová Kriglerová told The Slovak Spectator, adding that the authorities’ support serves as a counterweight to the political tools that political parties in Slovakia are using nowadays. “It is much needed, and it can have a positive influence on public opinion.”

She remained sceptical, however, about whether other public officials or politicians would be inspired by Ftáčnik’s support for the anti-extremist gathering, noting that support among foreign ambassadors for the LGBTI Pride march did not influence many local politicians to lend their clear support to the event.

“I don’t expect mayors, or even the prime minister, will now en masse start showing support for anti-extremist actions, but I believe [Ftáčnik] is a good harbinger,” Gallová Kriglerová said.

Both gatherings were officially announced and approved by the authorities. The extremists, however, avoided SNP Square and changed their route to the cemetery at the last minute. Upon hearing that the extremists had re-routed their march, the protesters moved quickly to the cemetery in a continued attempt to block them, the TASR newswire reported. Their gathering was, however, not officially sanctioned to take place there, unlike the extremists’ gathering, and thus the police forced them away to prevent a confrontation.

No major clashes occurred in the end, although police detained MP Alojz Hlina, who was among the protesters, and four others, TASR wrote. Hlina could be fined €165 for obstructing the right to gather, according to the Sme daily.

Hlina later said that he found his treatment by police to be professional, but was “terrified by the rooms they work in”, and compared the police offices to a stable, SITA wrote.

The research, entitled ‘The Slovak wartime state and the Holocaust in the collective memory of Slovak society’ and conducted as an independent initiative of experts from the Institute for Public Affairs, the Historical Institute of the Slovak Academy of Sciences, the Holocaust Documentation Centre and the Memory Kontrol/Truc sphérique initiative, revealed that, for instance, more than half of the respondents were not able to explain what the word ‘Aryanisation’ meant, and almost half of them said they did not know how many people had been deported from Slovakia to Nazi concentration camps.

In light of the research results, historians have opined that there is a need to remind people of Holocaust-related events, given the popularity of various extremist and xenophobic movements around Europe.

Insufficient knowledge of history is one of the factors that makes people more vulnerable to extremists’ ideas, Gallová Kriglerová admitted, but in the same breath warned of the one-sided interpretation of this phenomenon, and noted that it would be overly simplistic to claim that the lack of knowledge about the Holocaust is a direct cause of Slovaks’ tendency to support extremist ideas.

Slovaks are particularly closed-minded and tend to harbour negative attitudes toward minorities, regardless of the country’s difficult past, she said in an interview with The Slovak Spectator.

“The nation is so closed that the lack of knowledge about history is only one of many factors,” she noted, adding that apart from improving people’s knowledge of history, it would also be necessary to increase Slovaks’ exposure to various minorities. Greater migration to foreign countries, where Slovaks could experience first-hand what it is like to be a member of a minority, could help.