THE DANUBIANA Meulensteen Art Museum, situated on a man-made peninsula on the Danube River near Bratislava, has closed its doors for two months until May 18, when it will open its next exhibition. It will fully re-open in summer 2014. 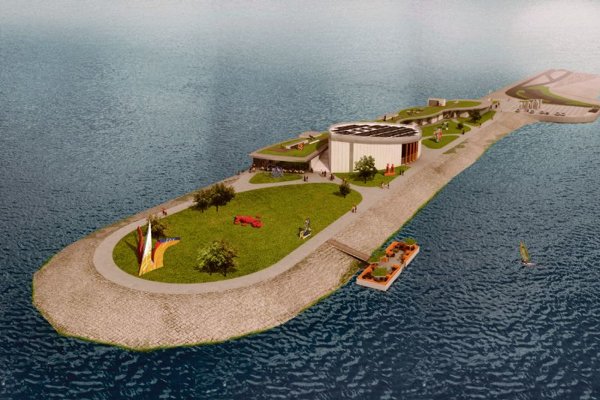 A visualisation of the Danubiana extension. (Source: SITA)
Font size:A-|A+0

THE DANUBIANA Meulensteen Art Museum, situated on a man-made peninsula on the Danube River near Bratislava, has closed its doors for two months until May 18, when it will open its next exhibition. It will fully re-open in summer 2014.

Danubiana is expanding to house a permanent exhibition of international, Dutch and Slovak art, the SITA newswire wrote. The outdoor sculpture park will also be affected by the construction work. The foundation stone of the extension was laid on March 17 and construction began the next day.

“This is an exceptional event,” Vincent Polakovič of the Danubiana Meulensteen Art Museum said at the opening, adding that “it is a step towards our goal which we set when opening Danubiana. If we look back, in the beginning, Mr Meulensteen [the Dutch art patron Gerard H. Meulensteen, who initiated and financed the construction of Danubiana, and until recently its operation] said that it was us who built this place, but it will be the artists who will give it its soul, and it will be the visitors who decide whether this peninsula on the Danube will become a place worth visiting, or whether it will be forgotten by history… And after the 12 years since then we can say that it has fulfilled these expectations.”

“Thanks to the museum’s founder, the project of enhancing the Danubiana became the focus of semester projects for architecture students at the University of Technology in Eindhoven and the Slovak University of Technology in Bratislava,” the head architect of the new project, Ján Kukuľa, told the TASR newswire. The results were first presented at a joint workshop in 2009, and later, two architectural solutions were selected.

“The concept that received the most support was one which suggested that new rooms should be connected through a roof, but the dominance of the original building would be preserved,” he explained.

Danubiana made headlines over a year ago after it was granted a €7-million public subsidy. The money should keep the gallery afloat and transform the institution into a national centre of modern art, at least according to the vision set out by the then culture minister Daniel Krajcer. The private organisation Via Danubiana, which has administered the institution and was founded in 2000 by Meulensteen and Polakovič, will be replaced by a state non-profit organisation called Danubiana. After 20 years, the gallery will come under full state ownership.

On May 18, a photo exhibition by Gerard Rancinan, Trilógia Súčasníkov + Chaos / Trilogy of the Moderns + Chaos will open.