U.S. STEEL Corporation will not now sell its U.S. Steel Košice (USSK) subsidiary in eastern Slovakia, after the government promised to help cut the firm’s energy and environmental bills. Representatives of the Slovak government and the US investor signed a memorandum confirming the latter’s continued presence in Slovakia, meaning that it will remain one of the country’s biggest employers: along with its subsidiaries, it employs almost 13,000 people. The Slovak government has been negotiating to get the firm to stay since last November, when it indicated that it was thinking of selling USSK. 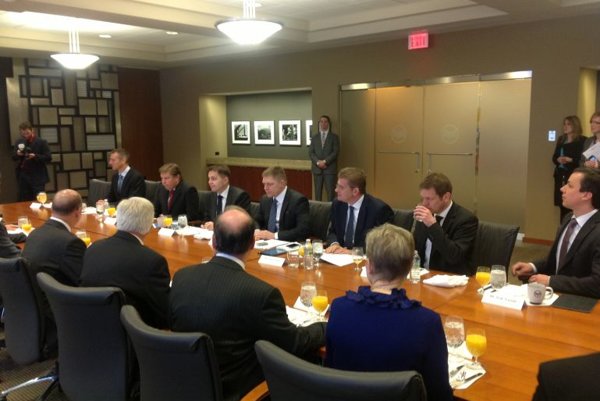 U.S. STEEL Corporation will not now sell its U.S. Steel Košice (USSK) subsidiary in eastern Slovakia, after the government promised to help cut the firm’s energy and environmental bills. Representatives of the Slovak government and the US investor signed a memorandum confirming the latter’s continued presence in Slovakia, meaning that it will remain one of the country’s biggest employers: along with its subsidiaries, it employs almost 13,000 people. The Slovak government has been negotiating to get the firm to stay since last November, when it indicated that it was thinking of selling USSK.

“It is good news not only for Košice and the east but for the whole of Slovakia,” Slovak Prime Minister Robert Fico said, as quoted by the Sme daily. “The agreement guarantees U.S. Steel’s stay in the east for at least five years and we will then re-evaluate the conditions.”

The memorandum was signed on March 26 in Košice, upon Fico’s return from a whirlwind two-day trip to the headquarters of U.S. Steel in Pittsburgh, USA, accompanied by Finance Minister Peter Kažimír, Environment Minister Peter Žiga, Mayor of Košice Richard Raši and President of the Košice Self-Governing Region Zdenko Trebuľa.

Fico said that “the investors are not staying in Slovakia for blue eyes” – meaning U.S. Steel did not decide for sentimental reasons – and confirmed that some of the state aid earmarked for the firm will continue for 15 years, according to Sme.

The prime minister insisted that Slovakia was not providing any “direct investment stimuli from the state budget” to get U.S. Steel to stay, and added “nor are tax holidays involved”, the SITA newswire reported.

Kažimír told the media that he would not have to make any allowances for the impact of the memorandum on the state budget.

Among other things, the memorandum guarantees that as of January 1, 2014 some laws, such as the law on renewable energy sources, will be changed to make it possible for U.S. Steel to benefit to the tune of around €15 million per year in reduced energy bills. Sme reported that the subsidies agreed could result in higher electricity bills for households.

The state and U.S. Steel also reached an agreement on environmental rules: part of the money the steel mill must pay for auctioned emissions allowances will be returned to the company to be spent on technology to reduce emissions, Sme reported.

U.S. Steel agreed in return to preserve employment and not enact mass layoffs at its Košice subsidiary, and to continue to use the state-run rail-freight company Cargo as its main supplier of services, Sme reported.

The head of the unions at the Košice steelmaker, Mikuláš Hintoš, called the deal a good starting point at a time when steelmaking across Europe is facing problems, but he warned that “it can be expected that the agreement to remain will be for a limited time period and not forever”, according to SITA.

U.S. Steel’s continued presence in Slovakia is a good signal to other American companies that might want to operate in Slovakia, US Ambassador to Slovakia Theodore Sedgwick told the TASR newswire on March 26, adding that he considers the deal to be beneficial for both sides. According to Sedgwick, a decisive factor for the US company was that it was economically beneficial to stay in Slovakia.

“More than a hundred years ago, many Slovaks emigrated to Pittsburgh to work in the steelworks there, and now a company from this city is operating and investing in Slovakia,” Sedgwick said in a nod to the historical symbolism of the company’s presence in Slovakia.

While opposition deputies Ivan Štefanec and Viliam Novotný, who represent the Slovak Democratic and Christian Union (SDKÚ), agreed that U.S. Steel’s decision to stay is good news, and acknowledged that the company is significant for the whole eastern Slovak region, they also stressed that “it is important to focus on the overall improvement of the [business] environment and the development of self-employed people and small businesses so that the country becomes gradually less dependent on a small number of large companies”, according to SITA.

Daniel Lipšic, an independent MP and leader of the New Majority (NOVA) party, called the negotiations a poor theatrical display concocted by Smer to divert attention from its own failure four years ago, suggesting that it was Fico “along with his former government and his protégé at the Regulatory Office for Network Industries [ÚRSO] Mr [Jozef] Holjenčík who drove U.S. Steel into considering leaving Slovakia,” TASR reported.

According to Lipšic, a key factor in U.S. Steel’s possible departure was the Act on Renewable Energy Sources and its accompanying regulations, under which companies that produce energy for their own consumption must pay charges to state-owned grid operator SEPS (Slovak Electricity Transmission Company) despite the fact that they do not use its services at all.

In response, Fico attacked the opposition, suggesting in an official statement that “Slovakia’s success in keeping the largest private investor here, and the rescue of the largest private employer, does not fit their plans”. He accused them of trying to abuse the threat of social catastrophe which would have been linked with the departure of U.S. Steel.

Speculation about the sale of USSK

Last November U.S. Steel said it was considering offers for USSK, one of the flagship United States investments in Slovakia, that were interesting enough to explore. The firm confirmed that there had been talks about a potential sale, but remained tight-lipped about the identity of potential buyers. The media later speculated that a possible buyer could be the Ukrainian firm Metinvest, which belongs to the System Capital Management group owned by Ukrainian oligarch Rinat Akhmetov. The company subsequently denied claims that it was planning to buy the steelworks.

Reports about a potential sale led to a political slanging match between Fico and former prime minister Mikuláš Dzurinda, with Fico claiming on November 20 that “it now shows what madness it was to privatise state property” and blaming the current situation on the Dzurinda governments in office between 1998 and 2006.

Fico implied that the Dzurinda administration effectively gave away state property, adding that “western investors were making a mint and now, when they have pulled out everything they could from here, they are leaving Slovakia for good”. Dzurinda’s party, the SDKÚ called Fico’s statements outrageous, and argued that U.S. Steel, by buying the Košice-based steel mill in 2000, had in fact saved the economy of eastern Slovakia.

The history of steelmaking in Košice dates back to the late 1950s, when the new steel mill was built on a greenfield site as part of the country’s communist-era industrialisation. After the fall of the communist regime in 1989, the government, which was then led by prime minister Vladimír Mečiar, privatised the profitable Východoslovenské Železiarne (VSŽ), as the works were then known, via a coupon privatisation and direct share sales. The latter were conducted in non-transparent circumstances and were financially disadvantageous to the state. Alexander Rezeš, a minister in Mečiar’s 1994-98 government, and his family gradually took control of the company.

In November 1998, after the first Dzurinda government had taken power, VSŽ management, then led by Július Rezeš, the son of Alexander, admitted that the company was facing a serious financial crisis. The Rezeš-led management stepped down and businessman Gabriel Eichler, nominated by creditor banks with the support of the government, which controlled about one third of VSŽ, became the company’s president. He was tasked with restructuring and stabilising the company and preparing it for sale to a foreign investor.

The US investor took over VSŽ’s core business on November 24, 2000, starting a new phase in the history of the steel mill. In total, U.S. Steel was to pay a maximum of $495.5 million for the steel mill. This sum included $60 million in cash, the assumption of $325 million in debt (out of a total of $411 million), settlement of $15 million in overdue taxes, and payment of a share of profits not lower than $25 million but not higher that $75 million to VSŽ shareholders in 2002 and 2003. It also promised to invest at least $700 million in the company over a period of 10 years. USSK was eligible for tax relief totalling $430 million up to 2010, although the sum had been exhausted by 2008.