CIGARETTE smoke could vanish from shopping centres and other facilities once parliament passes a revision to the law on the protection of non-smokers, which bans smoking entirely in these centres and confines it to designated smoking areas. Health protection authorities have welcomed the amendment, saying that it contributes to the protection of the rights of non-smokers, while it may also help those who want to quit smoking. The shopping centres say they are ready to comply with the legislation, yet some find it difficult to predict how customers will react. 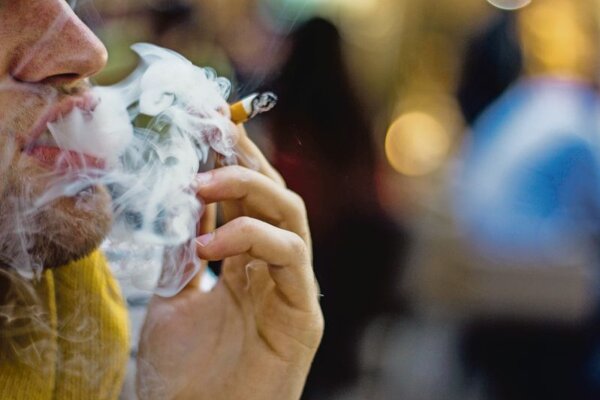 CIGARETTE smoke could vanish from shopping centres and other facilities once parliament passes a revision to the law on the protection of non-smokers, which bans smoking entirely in these centres and confines it to designated smoking areas. Health protection authorities have welcomed the amendment, saying that it contributes to the protection of the rights of non-smokers, while it may also help those who want to quit smoking. The shopping centres say they are ready to comply with the legislation, yet some find it difficult to predict how customers will react.

Parliament sent the amendment prepared by the Health Ministry, which bans smoking even in cafés and restaurants located in shopping centres, to the second reading on March 13. The designated smoking areas are to be located away from spaces where goods or services are sold. The law also bans smoking in all health-care and sports facilities, according to the SITA newswire.

“The legislation does not lead to a sort of persecution of smokers,” Health Minister Zuzana Zvolenská said, as quoted by SITA. “We, are truly trying to create rules in order that smokers limit the rights of non-smokers as little as possible.”

The amendment, which should become effective as of July 1, also increases the minimum fine for not complying with the ban from €331 to €500, with the maximum fines ranging from €3,319 to €15,000.
It also requires new warning labels to be placed on packaging of tobacco products, in line with European Union directives.

This is a positive change, and even the public, upset by cigarette smoke in shopping centres, has called for this, the head of the World Health Organisation (WHO) country office in Slovakia, Darina Sedláková, told The Slovak Spectator. However, despite the decreasing number of adult smokers in European countries, including Slovakia, there remains the fight against the increase of smoking among children, she added.

The non-smokers’ protection law amendment will also ban smoking in public buffet-style facilities that do not prepare food on the premises, but which only serve it. The term “meal” will be defined so as to include cakes and ice cream, so the amendment will also affect sweetshops. However, smoking will still be permitted around facilities that only sell snack foods, like nuts, candy bars and chips.

It is necessary to further educate people about smoking, since it is not just about the nicotine, but 1,400 other allergens found in cigarette paper, and inhaling second-hand smoke has a negative impact as well, Zvolenská said in support of the proposal, SITA reported.

Avion Shopping Park Centre Manager Sylvia Ďuriníková considers the change to be positive, as Avion aspires to be a family-oriented shopping centre, while, at the same time, respecting the rights of smokers. Avion has already built three designated smoking areas close to the centre’s entrances, Ďuriníková told The Slovak Spectator.

Peter Lukačovič, the manager of Europa Shopping Center in Banská Bystrica, said it is difficult to estimate whether cafés, and therefore even shopping centres, will lose clients as a result of the proposal.

“Of course, we [Europa] may see the number of smoking visitors decrease,” Lukačovič said as quoted by the Pravda daily. “On the other hand, it may motivate non-smokers, who were upset by smoking in the centre, to visit [us].”

Sedláková welcomes the change, but points to other places where the government still allows smoking.
“I am happy that after five years of persuading and submitting evidence about the need for this step, it seems that [the ban] will become a reality,” Sedláková told The Slovak Spectator. “Sadly, the amendment does not affect other cafés or buffet-style restaurants, leaving the current law in place, which obliges facilities to be separated into smoking and non-smoking areas, or to make the whole facility smoking or non-smoking.”

Sedláková added that the significantly stricter fines for violating the law may help to improve the situation if the government is able to effectively enforce them.

Adoption of measures created to protect non-smokers also help people who want to quit smoking, since those measures are among the reasons why smokers decide to quit, Lenka Skalická, the spokesperson of the Public Health Authority (ÚVZ) told The Slovak Spectator.

“Most people, including smokers, agree that they should not … harm non smokers by smoking in public places,” Sedláková added. “That forces them to rethink whether they will continue to smoke or not, and many of them decide to quit.”

Regarding warning labels on tobacco products, Sedláková said that opinions on their effectiveness vary. Supporters claim that the combination of warnings and pictures depicting organs affected by smoking may be disgusting enough to cause some people to quit, while sceptics assert that smokers ignore those labels.

Warning labels about the deadly effects of smoking will be effective in that they will “bombard us” from every corner, and the campaign will target various groups of citizens, according to Sedláková.

A ÚVZ survey from 2012 showed that 95 percent of adult Slovaks realise that smoking is harmful to one’s health, Skalická said, adding that even though the number of adults who smoke is decreasing, smoking is still attractive to children.

Among elementary school pupils aged 12 to 16, 9.6 percent smoke everyday, 7.1 percent smoke occasionally and 83.3 percent do not smoke at all, while 32.5 percent of those who do not smoke have tried it in the past and 14.5 percent quit smoking in 2012. Only 36.3 percent of pupils have never tried tobacco products. By comparison, 7.9 percent of pupils smoked on a daily basis in 2009, and 3.5 percent in 2003. The survey was made by The Institute of Information and Prognoses of Education (ÚIPŠ), an Education Ministry information body, among 732 pupils, according to ÚIPŠ website.

“I am shocked that almost 40,000 pupils at elementary schools smoke on daily basis in Slovakia,” Zvolenská said, as quoted by Pravda. “Those numbers are more than alarming and it should be clear to all of us that if rules do not become stricter it will have more fatal consequences than it has today.”

Around 11,000 people die from smoking-related complications annually, and data from 2000 by the Slovak Statistics Office (ŠÚ) says that 32 percent of adult Slovaks smoke regularly and 14 percent occasionally, according to the ÚVZ website.