Criteria for state aid will be stricter

SEVERAL months after the government allocated more than €121 million to support 10 companies backed by foreign investors – including two firms that promised only to preserve existing jobs rather than create any new ones – parliament has now passed changes to the legislation on state aid. The changes, prepared by the Economy Ministry, chiefly introduce rules that require firms seeking aid to create new jobs – in order to ensure that subsidies contribute to decrease the unemployment rate in specific regions – while at the same time broadening the range of potential applicants. 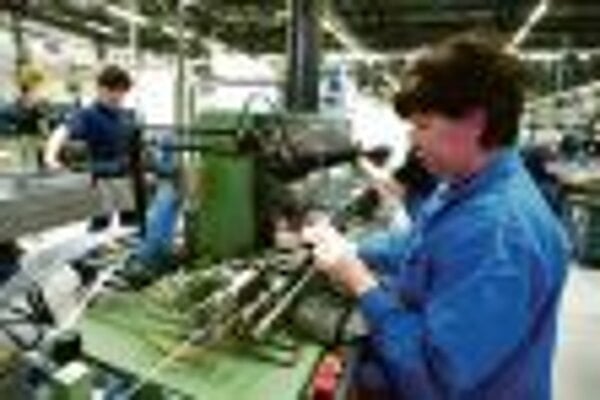 Companies asking for state aid will have to createnewjobs. (Source: SME)
Font size:A-|A+0

SEVERAL months after the government allocated more than €121 million to support 10 companies backed by foreign investors – including two firms that promised only to preserve existing jobs rather than create any new ones – parliament has now passed changes to the legislation on state aid. The changes, prepared by the Economy Ministry, chiefly introduce rules that require firms seeking aid to create new jobs – in order to ensure that subsidies contribute to decrease the unemployment rate in specific regions – while at the same time broadening the range of potential applicants.

“The aim is to create the conditions to provide investment aid to a broader group of entrepreneurs, and motivate business entities to actively join solutions to local employment and contribute to moderating the impacts of the global financial and economic crisis,” Economy Ministry spokesperson Stanislav Jurikovič told The Slovak Spectator.

The ministry promises that the amended law will be much stricter than the current legislation.
Analysts warn that even though the amendment contains clearer rules for allocating investment aid, such aid is still a non-systematic measure that risks deforming the business environment in Slovakia.

One of the most significant changes in the rules for investors will be the requirement that they create new jobs. New companies coming to Slovakia will, under the new rules, have to create at least 40 new jobs. Those who have already established a presence in the country will have to increase their payroll by at least 15 percent of the average number of new jobs created during the previous three years, subject to a minimum of 40 jobs, Jurikovič explained to the Slovak Spectator.

The new rules will also focus on supporting a wider range of enterprises, especially small and medium-sized companies. To this end the ministry decreased the sum for procuring tangible and intangible property. The minimum amount which investors are required to invest – so-called justified costs – will decrease from €7 million to €5 million, while in areas where the jobless rate is 50 percent higher than the Slovak average these costs will drop from €3.5 million to €3 million.

Additionally, the list of changes includes a rule requiring applicants in the industrial sector to expand production by at least 15 percent of the average reported during the previous three years, and to increase to at least 70 percent the proportion of employees at technological centres and centres of strategic services that have a university education, Jurikovič added.

The spokesperson explained that the original law was prepared in 2007, at a time when big investments were coming to Slovakia that supported economic growth and the creation of new jobs. However, at the moment, he said, there are not so many big investments and because of the crisis the state has had to pass several consolidation measures that have deterred some big investors from investing in Slovakia.

“Today, when we fight for every investment about which decisions are made abroad and also neighbouring countries are in the game, it is necessary to have the tools to help,” Jurikovič said.

The current amendment represents “a significant step forward, at least in the way it sets clear criteria for providing investment aid, which was noticeably lacking in the previous version of the law”, Tomáš Púchly, an analyst with the F. A. Hayek Foundation, told The Slovak Spectator. He added that next step might be “the systematic restriction of possibilities for providing investment aid”, or even an end to it.

Though investment stimuli might affect the decisions by foreign companies to invest in Slovakia, state aid is a non-systematic measure that contributes to deformation of the business environment, Púchly said.

Martin Vlachynský from the Institute of Economic and Social Studies (INESS), a think tank, does not believe the amendment will have a major effect on the business environment. According to him, the changes to the law are only “cosmetic adjustments” since investment aid has always gone to richer regions of Slovakia. He said that only a small group of firms will ever benefit from state investment aid.

“We consider investment stimuli to be an ineffective and expensive way of supporting business-making,” Vlachynský told The Slovak Spectator, adding that a better alternative would be to drop the policy and “devote the money saved to a flat decrease in taxes”.

Púchly also argues that investment aid should be substituted by an overall decrease in the tax and payroll tax burden since, he says, lower taxes “represent stimuli for the whole economy”.

Jurikovič responded that though the law on investment aid might in some sense deform the business environment, if other countries use similar laws, also Slovakia should have a tool to fight for the investments.

“The law […] has a clear ambition: to support mainly the creation of new jobs and investment in those regions where those jobs are missing,” Jurikovič said, pointing to the fact that the government has also approved a regulation that will differentiate the amount of investment aid allocated for individual regions on its February 27 session.

He added that though the new version of the law is stricter, it would not distract foreign investors from discussing possible investments with Slovakia.

The cabinet passed the regulation adjusting the amounts the state can give to companies seeking investment aid at a session on February 27. According to the new rules, the state will differentiate between applicants and give the maximum amount of investment aid to sectors with higher added value whose “development is in the priority interest of Slovakia”.

The regulation, prepared by the Economy Ministry, suggests reductions in investment stimuli for industries that are less attractive in terms of added value and Slovakia’s economic development. At the same time, the principle of higher potential for support in regions with high unemployment still applies. This means that regions where the jobless rate is higher than 1.5-times the average in Slovakia will be able to get the maximum possible investment aid, TASR wrote.

In districts where the unemployment rate is lower than the overall average, the state will not provide investment aid for the industrial and tourism sectors in the form of contributions for every newly created job.

The only projects that will be eligible for investment assistance in the form of a contribution for purchases of long-term tangible assets and intangible assets in any of Slovakia’s districts are investment plans related to technological centres, while investment plans in industrial production and tourism will only be eligible in districts in which the unemployment rate exceeds 1.25-times the average in Slovakia, according to the proposal.

“The intention of the government, to route more investment into less developed regions by granting higher investment stimuli there, is comprehensible,” Markus Halt, spokesperson for the German Chamber of Commerce and Industry in Slovakia, told The Slovak Spectator.

He added that it was debatable, however, if this would bring about the desired effect.

“This is because of the fact that state subsidies are only one tool for attracting investors, and sometimes prove to be a mere windfall gain,” Halt explained.

Lenka Bartoňová, the chair of the American Chamber of Commerce’s state aid task force and the vice-chair of AmCham FDI committee, assumes that supporting regions with high jobless rates, as well as investments with higher added value, is right and appropriate. However, she adds that it is necessary to assess whether the regulation and the changes to the law on investment aid will have the anticipated effect. According to her, it is questionable whether, for example, technological centres will be established in regions with 25-percent unemployment, despite higher investment aid, rather than in the biggest cities, which tend to have lower joblessness but also universities, built infrastructure, educated workers, and which are close to existing industrial production.

Vlachynský agrees says that state aid is unlikely to attract, for example, producers of microchips to Rimavská Sobota, or biotechnology development centres to Rožňava, both of which suffer from high unemployment.

“Conversely, investment stimuli might spark a fight for scarce, highly-qualified employees in which the subsidised company will outbid existing rivals,” Vlachynský told The Slovak Spectator.

He added that the problem of these regions is that there is a prevalence of poorly-qualified, long-term unemployed people. According to him, a better way to increase employment among such people would have been lower payroll taxes rather than stimuli.