GOODS hidden in filthy crates and raw poultry nibbled by rats – these were just some of the flaws hygienists found during inspections carried out in Slovak shops in January and February 2013. Compared to the pre-Christmas period, the number of flaws in shops’ premises rose by 10 percent on average. According to the Agriculture Ministry, this represented a reversal of the positive trend in food-safety standards observed in the second half of 2012. 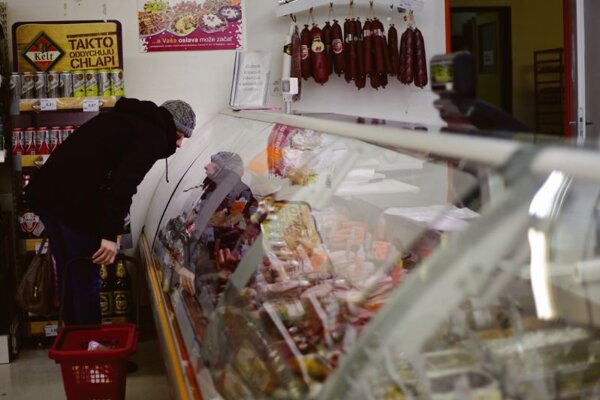 GOODS hidden in filthy crates and raw poultry nibbled by rats – these were just some of the flaws hygienists found during inspections carried out in Slovak shops in January and February 2013. Compared to the pre-Christmas period, the number of flaws in shops’ premises rose by 10 percent on average. According to the Agriculture Ministry, this represented a reversal of the positive trend in food-safety standards observed in the second half of 2012.

The ministry has warned that if such flaws are detected after April 1, when an amendment to the law on food comes into force, fines will increase and inspectors will have the option to close premises where they find mouldy food, incorrectly marked or unidentified goods, goods that have exceeded their expiry date, or insects, birds or rodents. The ministry said it would act “uncompromisingly”.

“If we find the flaws we found in January and February [also] in April, such premises will be closed,” Agriculture Minister Ľubomír Jahnátek told a press conference on March 14.

Representatives of food producers have welcomed the changes aimed at protecting consumers from below-par food. However, they warned against careless implementation of the new rules, something they said might lead to bankruptcies.

The State Veterinary and Food Inspectorate (ŠVPS) carried out 5,790 inspections during the first two months of 2013. Its inspectors found flaws in 18 percent of inspections, compared to 12.4 percent in the 5,518 checks performed between November 16 and December 31, 2012, according to data from the ŠVPS.

The worst results were registered during inspections made outside opening hours, when inspectors found flaws in 51.03 percent of cases. During unannounced inspections, every single check found faults, the ŠVPS reported.

When it came to specific types of shops, inspectors revealed most flaws at hypermarkets and supermarkets, primary producers, and production and packing rooms, where defects were found in more than 20 percent of inspections. The ŠVPS’ hygiene workers reported the worst results in checks carried out at CBA, Tesco and Billa supermarkets. Across all food chains checked, the number of defects stood at more than 10 percent, according to the ŠVPS data.

The Agriculture Ministry says that the increase in the number of flaws in premises was caused mostly by the clearance sale of food which remained in shops after Christmas, as well as some “weakening of attention of shop systems after the hectic Christmas period”, said Peter Hajnala, head of the ministry press department.

“The first two months of the year are the time when supplier-customer agreements are re-established and the attention of shops was concentrated in this direction with great certainty, also with respect to passing the law on inappropriate conditions in commercial relations,” Hajnala told The Slovak Spectator.

Daniel Poturnay, head of the Food Chamber of Slovakia (PKS) a lobbying group for food manufacturers, pointed to another problem that might affect the quality of food sold in Slovak stores. According to him, Slovak producers of food have to follow stricter rules than in other European Union countries. He pointed to increasing numbers of what he called “private brands” of food in shops, adding that the pressure on lower prices often forces shopkeepers to exchange traditional and proven suppliers with ones they do not know.

“It is the pressure to increase private brands and pressure on the prices of food from suppliers which helps the spread of fraudulent practices in food chains and food scandals, since on the one hand well-known producers disappear from the market, and on the other hand [other] producers are forced to exchange proven suppliers for suppliers with the lowest prices,” Poturnay told The Slovak Spectator.

Representatives of food chains disagree with the way the Agriculture Ministry has presented the results of food inspections, saying it does not distinguish between flaws which relate to the safety and quality of food and lesser, administrative flaws, the SITA newswire reported on March 20.

Billa Slovensko, for example, positively evaluated efforts by the ministry and food inspectors to check that the law is being observed, but criticised the way it published and compared the results. The inspectors mix together small premises with big food chains, and technical errors, such as “rusted heater” or “damaged paint on wall”, with more serious hygienic problems like sale of food after its expiry date, said Martina Kovacs, marketing manager for Billa Slovensko.

Vladimír Kocúrek from CBA Slovakia expressed a similar view. According to him, “the published results of checks disregard the total number of shop units in selected chains”. Moreover, he said that the character of the flaws is not clear, SITA wrote.

Tomáš Bezák, a spokesperson for the Slovak arm of retail chain Lidl, said that the state should say more clearly what type of flaws inspectors had found. In the past it was often the case that serious problems were lumped together with problems of a technical character, like broken tiles in storage rooms, he told the Sme daily.

The amendment to Slovakia’s law on food, prepared by the Agriculture Ministry in cooperation with the ŠVPS, was passed by parliament on February 5, and comes into effect on April 1.

Under the new rules, food inspectors will have broader powers during checks, which should allow them to act more resolutely in the case of findings that threaten the health or life of consumers, since the amendment includes “exact and clearly defined flaws and subsequent procedures of the official supervisory bodies, including the possibility to close down the premises”, Hajnala said.

The amendment also means that inspectors will be able to chemically or mechanically degrade food to prevent its possible resale on the market, according to an Agriculture Ministry press release dated February 5.

The changes also include increased fines. While inspectors can currently fine firms that repeatedly offer inappropriate food to customers between €500,000 and €2 million, the maximum potential fine will now increase to €5 million. Moreover, when setting the fine inspectors will make no distinctions between small, medium and large shops, as is the case now.

In addition to this, the law sets stricter conditions for selling food in municipalities outside officially registered marketplaces, which must be notified in advance. If a seller breaks the rules, inspectors will be able to fine them, the ministry press release states.

“We believe that the law will have an educational character, especially regarding the possible height of fines,” Hajnala told The Slovak Spectator.

Poturnay said that the PKS and its members support the usage of new tools in the area of food inspections which would prevent sale of food that might endanger the health and safety of consumers, as well as damage their trust in food quality in Slovakia. According to him, it is important for producers to know that the Slovak market will be protected from various food scandals and fraudulent practices which he said had spread recently.

On the other hand, he stressed that the powers inspectors will now have might cause the providers of shopping premises “big damage, and a dramatic increase in fines could liquidate businesses”, if they are used rashly. Therefore, he said, PKS will call on the ministry for a sensitive approach when deciding over sanctions.

“I assume that the aim of official inspections is not the liquidation of companies,” Poturnay said, adding that to date inspectors have not fined shops the maximum amount.

Problems with food from abroad

Food inspectors have also looked at the standard of food in transit. During the first two months of 2013, they checked 1,002 deliveries and imposed 67 fines. As regards countries of origin, hygiene workers revealed the most flaws in deliveries from Poland (32.55 percent of inspections). The country with second highest number of flaws was Hungary with 9.91 percent, followed by Slovakia with 9.84 percent, the Agriculture Ministry reported in a press release.

Inspectors checking shipments also revealed food beyond its expiry date and goods hidden in dirty crates. They returned these back to their country of origin, where they were liquidated in rendering plants, ŠVPS head Jozef Bíreš said on March 14.

Bíreš also said that in cooperation with the EU, member countries will create a database of firms and individuals that have been found guilty of doubtful practices involving food, or where inspectors have revealed fraud involving food. Every salesperson will be able to use this to check the history of their suppliers, he added.