‘IT’S IMPOSSIBLE’ is a phrase commonly uttered by Slovaks when faced with a difficult or unappealing task. But it has recently been picked up and used – with just a touch of irony – as the name of an initiative launched by a group of young people who are determined to prove the opposite, at least when it comes to the websites of Slovakia’s various state agencies. After hearing numerous complaints from friends and relatives about how poorly several state websites function, they organised a group of experts to come up with some ideas to make two of such websites more user-friendly, and offered them to the state for free. The state bodies welcomed the initiative and promised to implement some of the ideas into updates of their websites. 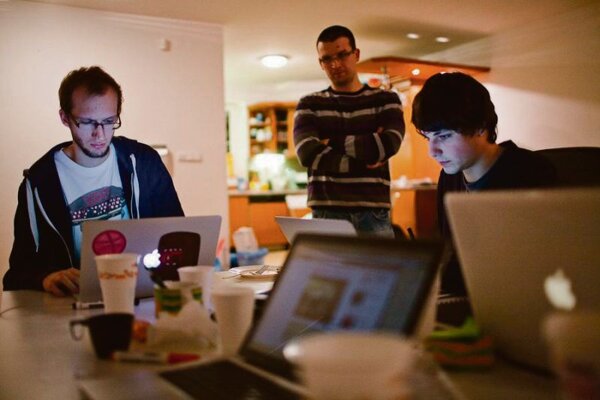 ‘IT’S IMPOSSIBLE’ is a phrase commonly uttered by Slovaks when faced with a difficult or unappealing task. But it has recently been picked up and used – with just a touch of irony – as the name of an initiative launched by a group of young people who are determined to prove the opposite, at least when it comes to the websites of Slovakia’s various state agencies. After hearing numerous complaints from friends and relatives about how poorly several state websites function, they organised a group of experts to come up with some ideas to make two of such websites more user-friendly, and offered them to the state for free. The state bodies welcomed the initiative and promised to implement some of the ideas into updates of their websites.

Jakub Ptačin and Peter Fabor, IT professionals and founders of the initiative, launched the project to redesign selected websites of the state administration last December out of frustration with the negative approach in Slovakia toward solving problems and to show that ‘it’s possible’.

“We feel that when somebody has objections to something and has a feeling that he can do it better, he should say this loudly,” Ptačin told The Slovak Spectator. “The aim of this initiative is neither to criticise nor throw dirt at anybody. It is literally a positive initiative, which seeks to show that something can be done better.”

They explain on their website that their idea was to come up with proposals and let the state agencies decide whether to implement them. They say they prefer making changes in a way that is “evolutionary” rather than “revolutionary”.

They chose the websites of the Financial Administration and the cadastral portal, i.e. the website enabling access to the land register, for redesign, adding that there were no particular reasons for choosing these two websites.

“There was no broader research behind choosing these two websites; we did not like them and so we re-worked them,” said Ptačin. Both websites have a lot of problems, from navigation to wording, while the design itself is also out of date, he added, noting that there is room for improvement on all state websites.

They organised a working group of about 20 people who met on February 2 and worked on the improvements free of charge. They were divided into four teams, each assigned to one of four tasks: (1) searching the cadastral portal, (2) a mobile application for the cadastral portal, (3) the website of the tax portal and (4) the application eDane (eTaxes).

The improvements and changes they proposed are related to the design of the websites, their usability and functionality from the viewpoint of the user’s experience and better copywriting. They also proposed changes regarding the appearance and the terminology on the websites, all of which should make the user interface more intuitive.

“We like the initiative and welcome it,” Peter Pellegrini, state secretary (i.e. deputy minister) at the Finance Ministry and the Digital Champion for Slovakia, said after the meeting, as quoted by the TASR newswire. “I would like to establish official cooperation with this group of young people in order that they also help us to improve services on other websites.”

According to Pellegrini, the IT experts indicated that many of the state websites are very complicated and not comprehensible for users.

Ján Suchal, one of the IT experts who joined the initiative, indicated that while the services the cadastral portal provides are “super”, the website is very complicated.

It can take 45 minutes for users to get what they need out of the website, but it is possible to make changes that reduce that time to minutes, said Suchal, as quoted by TASR.

The Finance Ministry sees the initiative as having come at a good time.

“In both cases [the Financial Administration and the cadastral portal], changes to their information systems, including portals, are just being carried out,” Radko Kuruc, an adviser to the finance minister, told The Slovak Spectator. “Thus we can say that the initiative arrived at the proper time. We believe that the fundamental ideas and comments of the representatives of the initiative will be taken into consideration and carried out within creation of new websites of the mentioned institutions.”

According to Kuruc, Pellegrini also offered representatives of the initiative membership in the advisory body of the Digital Champion and the possibility to comment on the extension of the central portal of the public administration, the key project in the eGovernment process.

Another result of the initiative’s activity is the creation of lepsie.statneweby.sk, i.e. better state websites, whereby people will be able to report errors and problems they encounter when using state websites.

The state bodies that run the websites which the experts found ways to improve welcomed the initiative and promised to implement the changes.

ÚGKK SR is also currently working on a new cadastral portal as part of the project of Electronic Services of the Cadaster of Real Estate within the Operational Programme Informatisation of Society (OPIS), Martina Šimková from the office of the chairwoman of ÚGKK SR told The Slovak Spectator.

“One of the goals of the project is to create a central system of the cadaster for real estate, which will secure a database for the cadastral portal, through which electronic services for the public, bodies of the state administration and self-governments will be provided,” said Šimková. “After this project is completed, almost all outcomes from the cadastral portal could also be used for legal deeds. The authority will discuss inspiring proposals of the initiative as well as their implementation with suppliers of the project.”

Ptačin and Fabor point out that this was probably the first time that usability of state websites has been discussed publicly. But they remark on their website that their initiative was not launched to re-design state websites thoroughly, as this is a task for commissioned companies which are paid for their work. But they are open to future cooperation with state bodies.

“We are glad that they have met with us and that they continue to communicate with us,” Ptačin told The Slovak Spectator. “Our feeling is that they endeavour to improve things, but we are not overly optimistic. We will wait for real results.”