THE OLD saying “fire is a good servant but a bad master” could easily pertain to the internet, as people need to use it wisely to avoid getting hurt. This is even truer for children, since adults usually know how to protect themselves more effectively. Nevertheless, continuous education is needed as the internet world continues to develop, bringing new threats with every new development. 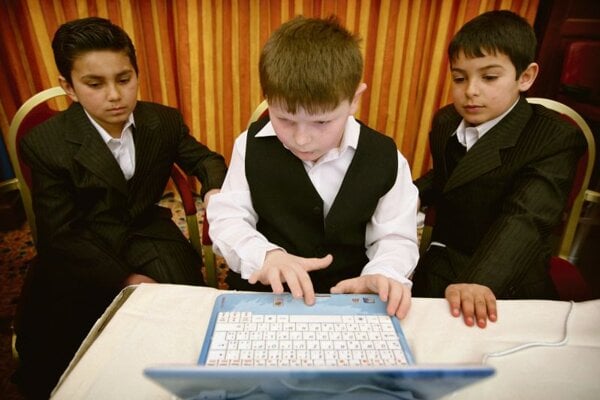 THE OLD saying “fire is a good servant but a bad master” could easily pertain to the internet, as people need to use it wisely to avoid getting hurt. This is even truer for children, since adults usually know how to protect themselves more effectively. Nevertheless, continuous education is needed as the internet world continues to develop, bringing new threats with every new development.

In Slovakia there are currently several initiatives aimed at improving the digital literacy of the general public and teaching them to behave responsibly when using the internet and mobile devices. A large portion of these initiatives are aimed at children and youths, as they are considered to be more vulnerable than adults.

Children more at risk than adults

Miroslav Drobný, the president of eSlovensko, an NGO that operates the Slovak Awareness Centre, differentiates threats according to children’s ages.

“The youngest children are threatened by free and involuntary online prostitution via a webcam or communication on chat rooms, which could end with a personal meeting and sexual abuse of the child,” Drobný told The Slovak Spectator. “Older children can be lured by the offer of gifts and money for paid and voluntary online prostitution, of which boys and girls are equally at risk.”

eSlovensko is working with the Interior Ministry, the Slovak committee for UNICEF, Slovak Telekom, SK-NIC Slovensko and the European Commission on the Zodpovedne.sk project, which focuses on safe and responsible usage of the internet, mobile phones and new online technologies.

Another threat Drobný mentioned is cyber bullying. In many cases, it may begin as ‘fun’ among classmates, but if it escalates it can cause serious harm, and in some cases has even led to suicide. Hate speech poses yet another threat, as well as the various forms of harassment and blackmail that can result when adolescents date and break up. Children’s pocket money may also become vulnerable when using the internet.

In the adult world the threats are more or less the same, said Drobný, although the motivation of the aggressors is different, like divorce, infidelity, problems at the work place, financial scams and internet gambling, among others.

Alexandra Piskunová, spokesperson for mobile operator Orange Slovensko, which runs an educational campaign called e-deti (e-children), points out that adults use the internet most often for work, followed by shopping and private communication.

“Compared to children, adults are more careful when providing their personal information; they understand the anonymity of the internet and thus use it to their benefit,” Piskunová told The Slovak Spectator. “The internet saves them time and they follow common sense when using it. On the other hand, children use the internet for entertainment and communication with other people.”

Piskunová specified that this especially includes online chatting or using social networks, on which they publish a lot of personal information. This makes them more vulnerable, especially due to the potential for abuse of data and photos.

“Contrary to adults, they do not understand the anonymity of the internet,” said Piskunová.

As the internet is borderless, Slovak children and youths face the same risks as those abroad. Here Piskunová listed fundamental internet threats, including the threat of anonymity, explaining that children have more difficulty distinguishing the virtual world from the real one. The internet enables one to hide behind the so-called diffusion of responsibility, and children, when doing something improper, are not willing to take responsibility for this. Other threats include the phenomena of being approached by a stranger using a false identity, virtual friends and enemies, meeting with unknown people, cyber bullying and addiction to the internet.

Among the companies working to increase digital literacy in Slovakia is Google with its Good to Know project.

Janka Zichová, manager of PR and communication for Google’s Czech and Slovak branches, told The Slovak Spectator that children and their parents are actually exposed to the same risks, but the main difference is in how they recognise them and respond to them.

“Thus it is important to know what we and our children can encounter and prepare them for this,” said Zichová.

With respect to the level of digital literacy in Slovakia and Slovaks’ awareness of internet threats, Drobný cited the results of a study conducted by Microsoft, published in February 2012, in which Slovakia gained the highest ranking.

The study shows that Slovak internet users are knowledgeable about how to use protection tools.
However, the results also indicated shortcomings in the area of protection against social threats, identification of sources of theft and protection of online reputations. Overall, younger respondents were better informed about threats posed by social networks than older-age groups.
Surveys conducted by Orange confirmed a change in behaviour among children.

“The number of children using technology like PCs or mobile phones has increased significantly,”

Zichová pointed out that Google identifies more than 10,000 potentially dangerous websites daily, and warning notifications are triggered for about 14 million search results and 300,000 downloaded files.

“Such an amount of threats requires internet users to be prepared for potential dangers,” said Zichová.

Drobný agrees that internet users should maintain a good level of awareness.

“New services and new threats keep coming,” said Drobný. “We, for example, do not know how children will use Windows 8, particularly its paid services. This, for example, may seriously threaten the wallets of their parents.”