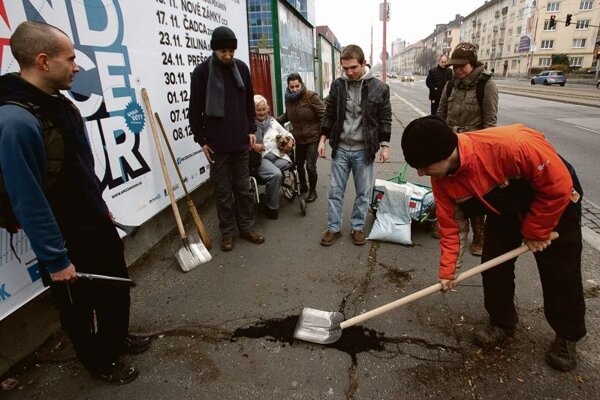 APRIL 2 is the deadline this year for filing tax returns and paying taxes. Taxpayers can again choose to assign 2 percent of their taxes to non-governmental organisations. Though both Plenipotentiary of the Slovak Government for the Development of Civil Society Filip Vagač and the Pontis Foundation consider the 2-percent assignment crucial for the funding of NGOs, the government is planning to gradually reduce the sum, so that in 2019 it will stand at 0.5 percent for companies. Both Vagač and Petra Nagyová, Pontis’ PR manager, consider funding the most serious challenge that NGOs face.

In Slovakia the third sector, a term used to describe the sphere of activities of non-governmental organisations that perform roles which are not sufficiently covered by the first sector (the state) or the second sector (business), has played a significant role in the democratisation of society.

Yet, in Slovakia the level of participation by citizens in public affairs is still insufficient, Alena Pániková, director of the Open Society Foundation, told The Slovak Spectator, adding that “it is as though we are not aware that one needs to pay constant attention to democracy; critically assessing and improving it, since its quality depends on us, and [refining] it is a never-ending process”. Pániková also noted that the public’s interest in the third sector depends on the quality of information the public receives about it, and here she sees a big challenge for the media.

According to Vagač, however, the development of society’s participation in public matters is a long process in post-communist societies, since the previous regime forced whole generations to keep silent and did not allow them to participate in public affairs, he told The Slovak Spectator.

When it began, the income-tax assignment scheme allowed only private individuals to allocate 2 percent of their income tax payments to a chosen non-governmental organisation. Later, the scheme was extended to allow companies to donate money as well. In 2009 the government changed the corporate scheme to encourage donations by companies from their own profits. Under the altered scheme a company can assign the maximum portion of its corporate tax dues only when it donates money from its own profits; the percentages that should be assigned and donated can vary, but the total should always be equal to 2.5 percent of paid taxes.

However, the financial and economic crisis has interrupted these plans and after long negotiations with non-profit and non-governmental organisations, the Finance Ministry has decided to extend the current scheme for another year.

“The crisis revealed that fundraising mechanisms are weak and do not motivate for donation as well as philanthropy,” Vagač said. “The 2 percent assignment mechanism is the most powerful tool [for NGO fundraising], however, there are no other tools which could widen the portfolio of possibilities to support citizens’ volunteerism.”

To explain the government’s attitude towards NGOs, Vagač pointed out that Smer, the governing party, has agreed to continue the implementation of the Strategy of Civil Society Development in Slovakia and the Open Government Partnership Action Plan, both of which were the basic pre-conditions of the NGOs during discussions with Prime Minister Robert Fico.

Currently, specific departments are working on documents, which should result in a memorandum of understanding, to define how the dialogue between the state and NGOs should take shape, according to Vagač, who added that this process will show the government’s willingness to reach agreement over participation by NGOs in managing public affairs.

Nagyová sees the preservation of the post of plenipotentiary of the Slovak government for the development of civil society as a positive move, since the plenipotentiary ensured continuity in fulfilling the Strategy of Civil Society Development.

Yet Pániková is rather sceptical about the government’s willingness to cooperate with the third sector. Even though the government has declared that it considers the third sector to be an important player, the reality has so far not reflected that, Pániková said. “We have set some formal mechanisms [for cooperation], but oftentimes there is not sufficient time or room for real application of NGOs’ knowledge and experiences during their participation in legislative processes.”

There were almost 37,000 NGOs in Slovakia in 2011, of which 33,240 were civic organisations, 2,200 were non-investment funds, 874 were non-profit organisations providing generally beneficial services and 610 were foundations. Many NGOs have probably since been liquidated, since they were created for only one specific activity or were too small to survive, according to the 2011 CSO Sustainability Index for Central and Eastern Europe and Eurasia, a report that is prepared annually by the US Agency for International Development (USAID) in cooperation with non-governmental organisations in countries of the region.

Vocabulary related to the third sector

Charity – The underlying principle of charity is love of one’s neighbour. There are a number of different organisations focusing on charity which care for the poor and socially disadvantaged.
NGO – An entity with legal identity that does not create or distribute profits. It can have an income as well as paid workers but it cannot distribute money to its members or management. NGOs operate on a voluntary basis and are independent of government and public institutions.

Philanthropy – Voluntary donation of funds, time, services or goods for charitable purposes without expecting direct counter-value. Philanthropy can be individual, corporate or institutional. Philanthropy is not sponsorship, which is motivated by an immediate business goal, the visibility of the company or other expected business benefits.

Sponsorship – A form of financial or non-financial co-operation between a business and a non-profit entity which has a contractual form. Sponsorship provides the business partner with an opportunity to present itself through a non-profit project.

Civil Society – Civil Society use to be known as the civic sector, the non-governmental sector, and the non-profit sector. It is therefore clear that civil society is created by diverse free activities that are independent of public authorities and whose purpose is not to make a profit but to promote higher, public, general, partial, group or individual interests.

Sources: Pontis Foundation, The Plenipotentiary of the Slovak Government for the Development of Civil Society, European Commission, partnerstva.sk websites.