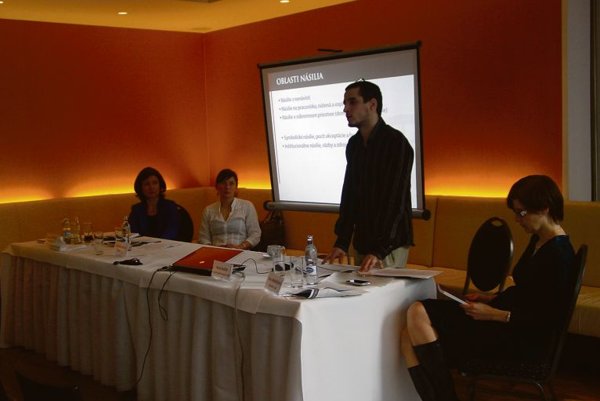 The relatively small number of migrants living in Slovakia, as well as the country’s limited historical experience of incoming migration, means that migrants are practically invisible, while institutions, assisting organisations and researchers know little about their lives, especially in relation to factors such as violence and abuse, the IOM wrote.

According to the study, 67 percent of migrants feel safe or very safe in Slovakia but 54 percent do not consider their rights to be equal with those of Slovak citizens. The study also suggests that migrants have insufficient contacts with formal institutions that are supposed to provide services for them, and are often dissatisfied with the quality of those services.

Zuzana Vatráľová, the head of the IOM office in Bratislava, said that her organisation, which has been providing counselling to migrants for eight years, had learned from migrants about abusive practices at work or attacks in public, but until now a more detailed systemisation of their experience was lacking, and this was the reason that the IOM conducted its study.

As far as violence is concerned, “it is violence of such an intense form that it would require intervention on the part of the police and assisting organisations”, said Matej Blažek, one of the authors of the report.

“Clear and understandable information in a foreign language, contact with the communities of migrants through field work or specific services and activities mainly for the most vulnerable groups of migrants are lacking,” Blažek said, according to an official IOM statement.

The Alien Police, in response, stated that it had not recorded any problems being experienced by migrants in their dealings with officers of the department, and Denisa Baloghová, spokesperson for the Police Corps Presidium, told The Slovak Spectator that the office exerts “maximum effort” to secure communication and the provision of information to foreigners regardless of “their nationality, race, religion or citizenship”.

However, the IOM suggests in the study that since the Alien Police is an institution of first contact for foreigners it should be replaced ideally by a civilian institution which would not also be responsible for what the study called “protection of the territory from illegal migration”.

Baloghová told The Slovak Spectator that the Interior Ministry on its website provides regularly updated information pertaining to the operation of the Alien Police, the Law on Residency of Aliens is available in English along with documents needed for official contact, which are available in different languages. However, when the website was checked by The Slovak Spectator on April 4, the English-language link returned a page which stated the section was ‘under construction’, but contained no further information.

Baloghová said that the IOM surveyed around 800 foreigners, representing 0.55 percent of all foreigners with a valid residence permit in 2012, and noted that an additional 75,000 foreigners had been granted visas. She added that in 2012 approximately 1,000,000 foreigners entered Slovakia.

As for the idea of replacing the Alien Police with a civilian organisation, Baloghová said that since it is not clear what this move would bring, it would be necessary to conduct an in-depth analysis and not only from the point of view of the IOM but also the Police Corps.

“The Office of the Border and Alien Police of the Police Force Presidium does not consider this solution appropriate and will continue to perform tasks related to the ‘institute of the first contact’,” Baloghová said, adding that the office sees its cooperation with civil bodies like IOM as the key to fulfilling its goals.

When reporting on violence, the IOM uses the World Health Organisation (WHO) definition which states that violence is “the intentional use of physical force or power, threatened or actual, against oneself, another person, or against a group or community, that either results in or has a high likelihood of resulting in injury, death, psychological harm, maldevelopment, or deprivation.” Some actions which do not involve violence, but instead comprise exercise of ‘power’, are therefore classed as violence. The IOM also points out that migrants are not just victims of violence: very often they are violent towards members of their own community, according to the survey.

There are differences between different groups of migrants and their experience of various forms of violence. For instance, 18.7 percent of respondents from the African community and 9.9 percent of migrants from majority Muslim countries said they had experienced a physical attack motivated by their ethnicity or appearance. The average rate of such attacks is just 6.1 percent. Such experiences may “lead many migrants to giv[e] up on expressing their cultural or ethnic identity and employing a range of preventive strategies, such as avoiding public transport, some public areas and places, or hiring private education for their children”, the IOM report states.

Ukrainian immigrants are especially vulnerable to abuse and forced labour. More than 82 percent of Ukrainian men work more than 48 hours per week and only 10 percent of them said they did not experience any indicators of forced labour. They work mainly in low-paid positions like construction, warehouse or restaurant work, motivated primarily by pay. Many are therefore willing to live and work in poor conditions.

Regardless of their gender, 6 percent of all migrants experience violence and abuse within the household to an extent that would require institutional help and police intervention. While women are usually threatened by their partners or their family, men – especially male Ukrainian workers – tend to experience violence related to their workplace relations.

Another very vulnerable group comprises people from communities with a low level of integration, such as Vietnamese or Chinese migrants, among whom even employers have handicaps compared to the majority. Both Vietnamese and Chinese migrants often work in poor conditions since many do not know Slovak and are not able to find work elsewhere.

The IOM has proposed several recommendations to deal with violence committed against foreigners in Slovakia. When it comes to violence motivated by hate, it advises improving the opportunities for victims to report crimes, for example through use of so-called “third-party reporting schemes”, which means that not the victim but an independent third party can inform the police about a crime. Moreover, it proposes special monitoring of reports of crime where prejudice was the main reason for the attack, and publication of the number of convictions; it also suggests information campaigns to prevent crimes.

In the area of violence connected to forced labour, the study suggests that training be organised for employees who deal with such cases about the risks of forced labour and exploitation; that the National Labour Inspectorate be motivated not only to identify, but also to protect migrants; and that working migrants, as well as their organisations, be informed about their rights. The state should also establish a system of re-integration help for migrants who are abused by their employers, and allocate money to Slovak-language courses for working migrants.

When it comes to domestic violence, the IOM study recommends preparing future legislation in such a way that the state distinguishes between male and female victims, and creates programmes for abused women. Moreover, it should focus on better cooperation between state bodies which deal with victims of domestic violence. In the field of prevention, the IOM study suggests preparing materials in foreign languages, which should be part of field work with migrants.