ON FEBRUARY 27, the Slovak National Theatre (SND) announced its artistic plans for the 2013/2014 season, as well as broader plans for the future of the theatre. The SND’s new general manager, Marián Chudovský, explained that the repertoire of a big, traditional theatre should be planned for a lengthier period of time and span several seasons, and that this should hold especially true for the SND, the biggest stage in the country. This concept helped Chudovský land the top position at the theatre. 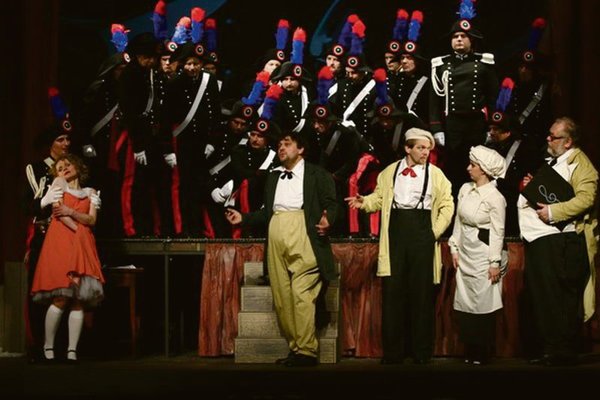 ON FEBRUARY 27, the Slovak National Theatre (SND) announced its artistic plans for the 2013/2014 season, as well as broader plans for the future of the theatre. The SND’s new general manager, Marián Chudovský, explained that the repertoire of a big, traditional theatre should be planned for a lengthier period of time and span several seasons, and that this should hold especially true for the SND, the biggest stage in the country. This concept helped Chudovský land the top position at the theatre.

“We would like to make the Slovak National Theatre more open, ready to compete with other stages, both foreign and domestic,” Chudovský said at the press conference. “If the guest performances are spread over the season, they can escape the audiences’ attention – so ideally, we would like to establish a festival that would enable such an artistic exchange and healthy competition,” he added.

“After seven months in this position ... I have changed the organisational structure of the theatre, merging some positions and taking other steps so that the number of employees shrinks without mass layoffs,” he said at the press conference, adding that although the SND is still in the red financially, the deficit has been reduced and the goal remains to cut it further in the future.

He created an art council, as well as a concept for the theatre’s repertoire and a marketing division. The theatre is now divided into seven sections, each of which is headed by its own manager. The opera section is led by Austrian conductor and music personality Friedrich Haider, the ballet section by choreographer and former dancer Jozef Dolinský and the drama section by director Roman Polák, the latter two of whom are Slovak. (Chudovský was appointed to lead the SND in July 2012, after an interim period; his predecessor Ondrej Šoth, resigned from the position at the end of 2011 after a series of audits revealed violations of budgetary rules).

Yearbook to appear in May

The theatre has launched a monthly magazine about its work, personalities and productions, called Portál, which is now distributed more widely and which provides information (unfortunately only in Slovak) about ballets, dramas, operas, premieres as well as past milestones and outstanding personalities in Slovak theatre. The magazine also features interviews with artists and art personalities and information about works of visual art exhibited on the SND’s premises.

By the end of May a multilingual yearbook is slated to appear, containing the repertoire, drama plans and accompanying events of the 2013/2014 theatre season. A new feature is online access to the theatre’s web-portal, as well as the opportunity to buy tickets online through www.navstevnik.sk.

Roman Polák promised for the SND’s drama section that the great works of classic world and Slovak literature will continue in the big hall, with an overarching theme revolving around the split of the family. For the small hall, called Studio, Polák foresees more demanding pieces for non-mainstream viewers, citing contemporary, progressive plays by both Slovak and foreign authors. There will also be a “Spring Theatre Tour 2013” organised by the European Theatre Convention-ETC, wherein a bus filled with theatre reviewers and journalists will visit cities like Stuttgart, Karlsruhe, Liege, Zurich, Prato, Maribor, Zagreb and Bratislava, between April 18 and 24. The theme in Bratislava (where a staging of Aeschylus’ Oresteia is part of the programme) is the paradox of old and new. A Slovak journalist from Slovak Radio will be travelling with the theatre tour.

Haider said he was authorised by Culture Minister Marek Maďarič to make necessary improvements in order to develop the national opera artistically and to make it competitive at the European level. He stressed that the current season had already been prepared earlier. “One should be very careful [about] what to change and what not to change, at any rate,” Haider said. “Like in a house: when you demolish too many seemingly obstructing walls, it can crumble into ruins. Thus, I made some decisions in three days, some in several months and I plan more for the upcoming period.”

As for the opera section, Friedrich Haider noted that there are masterworks which are a challenge to stage but which are necessary to present due to their popularity with audiences and quality. Haider promised to bring such works, as well as lesser known pieces, including some which have yet to be performed at the SND. He foresees some fundamental changes in the opera ensemble, the first being a reduction of employees, including soloists, some of whom will be replaced by guest performers. On the other hand, Slovak conductor Peter Valentovič will serve as a new source of support for the team, coming from the Vienna State Opera. Haider joked that due to his talent, he tends to call him “Talentovič”.

On the issue of the difficulty filling the theatre’s seats, the Austrian opined that the problem might have to do with the public’s perception of opera as archaic and conservative. He mentioned future cooperation with colleges and other schools aimed at educating and boosting the interest of younger generations in opera. To that end, two projects are being prepared for the next season: a children’s interactive version of Donizetti’s L’Elisir d’Amore (The Elixir of Love) and Carnival of the Animals by Charles-Camille Saint-Saëns – the latter made into a “pocket version”, ideal for guest performances anywhere.

Haider said that his goal was to change the titles in the repertory more frequently, as they tend to attract fewer people the longer they run. The titles to be opened in the next season are Verdi’s Rigoletto – commemorating the composer’s 200th anniversary; Puccini’s La Boheme; a lesser-known Mozart piece called La Clemenza di Tito; and Tchaikovsky’s The Queen of Spades. The fifth title opening the season will be the renewed premiere of Svätopluk by Slovak composer Eugen Suchoň,
marking the 20th anniversary of the composer’s death and the 1150th anniversary of the arrival of Ss Cyril and Methodius to evangelise Great Moravia, in which the count Svätopluk played a crucial role. After Svätopluk comes the production of Dorian Gray in November, a work by contemporary Slovak composer Ľubica Čekovská.

Haider has promised to invite renowned professionals as potential guest directors for the SND, like Austrian Peter Konwitschny, Slovak Juraj Jakubisko and Germans Nicole Raab and Martin Schüler, and he has also mentioned talks with David Radok and others.

As for ballet, Dolinský cited the heritage of the “classical global ballet literature, the original Slovak ballets and the works of the most outstanding choreographers of the 20th century” as the foundation of his section. “Finally, The Nutcracker is coming to our stage – based on the original version by Marius Petipa, as revised by Vasili Vainonen and fully respecting the classical ballet,”
he disclosed. The work will be choreographed by Rafael Georgijevič Avnikjan and Jozef Dolinský Senior, who will also direct it. The next premiere will feature the celebration of the 450th anniversary of William Shakespeare – his Midsummer Night’s Dream will be staged as a comic ballet and choreographed by renowned European artist Yuri Vámos.

As for domestic pieces, the first Slovak ballet, Angelika by Eugen Suchoň, will premiere, as well as a contemporary dance theatre project called Slovak Dances, involving the music of modern Slovak composer Peter Breiner. In the Studio the monthly contemporary dance evenings, which offer a taste of progressive dancers and choreographers, will continue, according to Dolinský.

The Slovak National Theatre has already published its programme until the end of 2013 on the www.snd.sk webpage, where more detailed information can be found, also in English, and where tickets can be purchased.

Chudovský stressed that the long-term goal is not only to stem losses and apply austerity measures to help save state money and to maintain attendance, but to bring more audiences to the national stage as well. Haider indicated that it was crucial to open the genre to the wider public and to make opera, as well as drama and ballet, more attractive to younger generations.