The first Good Market of 2013 in Bratislava lured thousands

THE DOBRÝ Trh / Good Market on Panenská Street in Bratislava on March 23 managed to attract between 10,000 and 17,000 people, despite the cold weather. 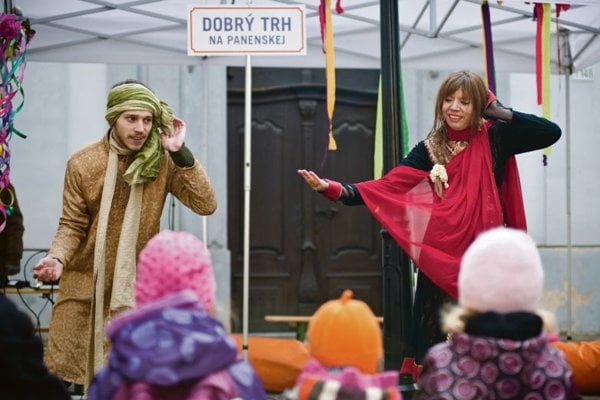 THE DOBRÝ Trh / Good Market on Panenská Street in Bratislava on March 23 managed to attract between 10,000 and 17,000 people, despite the cold weather.

There were several new attractions this time, for example the Slow Food zone, where farmers offered artisanal culinary specialties, and India focus, which featured examples of the country’s cuisine, clothing, antiquities, as well as yoga lessons, Indian classical dance and a lecture on ayurveda, the SITA newswire wrote. Other attractions included programmes for children, a musical garage sale and a show by Bene & Roland Kánik.

The TASR newswire quoted Barabara Zavarská from the Punkt civic association, which organised the event, as saying that the main aim of the market is to revive the classic city borough, and to turn the public space in downtown Bratislava into a meeting point of people in the neighbourhood again. “We are glad that people accepted such a possibility in relatively big numbers, in spite of the very cold weather,” Zavarská added. She said that the market was extended into the Elementary Artistic School of Miloš Ruppeldt, with part of the cultural programme taking place in the school’s yard. The market also featured the “cyclo-cuisine” stand, where people could have their bicycles repaired, and a kiosk of the Staré Mesto / Old Town borough where citizens could offer comments and pose questions to the borough’s mayor, Tatiana Rosová.

“For the next Dobrý trh, on April 27 in Jakubovo Square, we are preparing to focus on local farmers’ products,” Rosová said for SITA.