THE FLOODING that occurred this year, mostly in central Slovakia during Easter, has prompted a discussion over the advantages of treatments built within the Programme of Revitalisation of the Land and Integrated Management of River Basins in Slovakia. Launched by the previous government, the programme has received much criticism from the Slovak Water Management Company (SVP) as well as the current government. Yet mayors of some villages stricken by floods praised the projects, especially the dyke systems, which help retain groundwater, saying that they minimised potential damage. 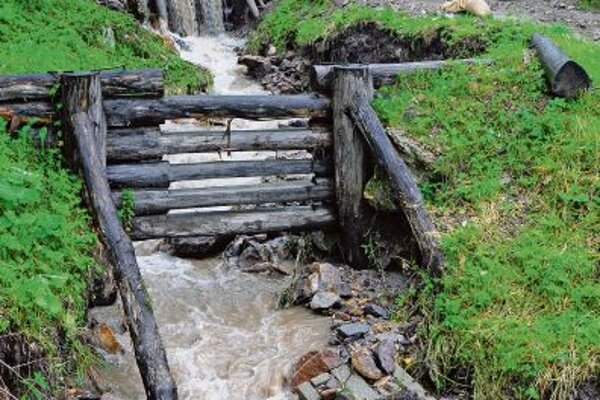 THE FLOODING that occurred this year, mostly in central Slovakia during Easter, has prompted a discussion over the advantages of treatments built within the Programme of Revitalisation of the Land and Integrated Management of River Basins in Slovakia. Launched by the previous government, the programme has received much criticism from the Slovak Water Management Company (SVP) as well as the current government. Yet mayors of some villages stricken by floods praised the projects, especially the dyke systems, which help retain groundwater, saying that they minimised potential damage.

Positive experiences with the programme’s flood prevention systems were confirmed by a recent survey conducted by the Civil Society Development Foundation (NPOA) with 218 of 488 mayors of villages who participated in the programme of revitalisation. It showed that more than 75 percent of respondents consider the projects to be the correct approach to prevention of flooding, erosion and droughts. Moreover, about 70 percent of mayors see the programme as a viable way to hire unemployed, with 89 percent of the mayors, regardless of their political backgrounds, saying they would like to continue with the land revitalisation programme.

“The practice showed that only municipalities and their inhabitants have the best knowledge of the local conditions; they know and want to work on restoration of the land which big state-run companies and organisations cannot do,” said head of the NPOA Katarína Vajdová, as quoted in the press release.

Juraj Kohutiar, an analyst with the NPOA, added that building a great number of diversified, relatively small objects to retain water in the upper sections of river banks is “cheap, effective and ecological”.

“It is an innovative solution that might become a Slovak contribution toward searching for measures for adapting to climate change,” Kohutiar told The Slovak Spectator.

Moreover, the programme mirrors a broader European Union trend toward using more “green infrastructure” to prevent flooding, erosion and desertification, Kohutiar added. He referred to the EU’s initiative to safeguard Europe’s water resources, passed at the end of 2012.

Yet the current management of the Environmental Ministry considers the whole programme of revitalisation to be non-systematic, saying it lacks input from experts, as well as data about its effectiveness. Moreover, not all mayors who attended the revitalisation programme participated in the survey, ministry spokesperson Maroš Stano told The Slovak Spectator.

Meanwhile, the ministry has started work on a new flood-prevention programme, the results of which will be published in two months, Stano added.

The previous government approved the revitalisation programme, prepared by then government proxy for local administration, integrated management of river banks and land Martin Kováč, in cooperation with Matej Michal Kravčík from the civic association Ľudia a voda, at the end of October 2010.

It was based on three main principles: retaining rainwater where it falls, storing rainwater accumulated in the ground, and draining or diverting rainwater which the land cannot absorb.
The priority was to “retain rainwater in the ground, slow down its run–off and allow infiltration, revitalisation and restoration of the damaged country, area, [or] basin” in order to protect people and their property from direct damage caused by “torrential waters and devastating floods”, reads the proposal of the programme published on the Justice Ministry’s website.

A total of 488 municipalities joined the projects. With financial and methodological help from the Government Office and labour offices, they created 7,700 seasonal jobs, mostly for the long-term unemployed. The projects resulted in about 60,000 various systems to retain water in the soil, Kováč told the press conference held in early April, 2012.

Altogether the government spent more than €43 million on creation of anti-flood systems.
Even though the authors of the programme believed there would be further realisation of the proposed measures, the projects were halted with the end of the Iveta Radičová government in March 2012. The new management of the Environment Ministry described the programme as non-systematic, and called many of the dykes “illegal buildings” since they lack construction permits and permits from specialised authorities, Stano told Sme.

Additionally, there was no expert discussion around the construction of the levees, and the water managers were unable to scrutinise the way the projects were carried out or the approach of those who designed them, the spokesperson added.

With this year’s floods, in at least one case, in Rudno nad Hronom, it turned out that older structures built by water managers were, in fact, what actually protected the area from flooding, and the dykes served only as an additional back-up, Stano said.

“The Environment Ministry perceives the method of retention of groundwater as part of the complex of other measures, and does not consider it bad,” Stano told The Slovak Spectator. “Yet, to reach more effective protection from floods the combination of various kinds of steps, including the usage of dams, weirs, polders, and not only purposeful selection of one of them at the expense of others, is needed.”

Ľuboš Krno, spokesperson for the SVP said that the revitalisation programme dealt with only one area of anti-flood protection. He also pointed to the fact that during the past two years the rain has been irregular and unpredictable, so the dykes have not been thoroughly or reliably tested.

Krno said that though the state spent nearly €34 million to construct the dykes, they were built unprofessionally, and heavy rains have already damaged some of them, making those areas much more vulnerable to flooding.

“Moreover, the programme was realised in a very primitive way in some places, without guaranteeing the expected effect, keeping the security of the area under these dykes, in many cases without relevant permits of state administration bodies, including limited lifetime,” Krno told The Slovak Spectator.

Despite the doubts over its effectiveness, the mayors of villages which have installed water retention systems have praised the projects, saying that they help to prevent floods.

“I cannot understand why we do not continue in the programme of revitalisation,” said Ján Pokrivka, mayor of Snežnica, Kysucké Nové Mesto district, as quoted in the NPOA press release. He added that the programme was simple, understandable to everyone and that it has not met with any negative response in the village. “If we want to protect our villages from the unpredictable impacts of floods, we do not have any other way than making such simple, available and built-by-our-own-citizens objects.”

Also Juraj Tencer, mayor of Brehy, Žarnovica district, which was hit by flooding during Easter, praised the revitalisation programme. Though the village suffered from a landslide, Tencer told Sme that without the dykes the situation in the village might have been worse.

At the moment, the NPOA, CRVS and Ľudia a voda are trying to identify schemes to help the municipalities continue these projects, for example through getting micro-loans, or receiving financial support from local businesses and inhabitants which might be combined with various accessible grants, Vajdová told The Slovak Spectator.

Kravčík added that one way to receive funding is through a donation of 2 percent of people’s taxes, or finding other partners with which to cooperate in order to continue the land revitalisation project “in the area of integrated protection of water resources, but also in integrated development of communities, regions and territories”.

Slovakia has 559 territories which could potentially be threatened by flooding, Stano told The Slovak Spectator, adding that the problems cannot be solved at once. At the moment the water managers are discussing not only big and financially more demanding projects, but also local anti-flood measures.

“There will be simple, less difficult measures, such as the broadening or deepening of basins of smaller water flows, which might help each municipality as [a means of] prevention,” Stano said, adding that the water managers plan to cooperate with the municipalities.

The new measures prepared by the ministry should include a number of flood-prevention measures, like disbursement of streams and building polders in forests, good agricultural practices, measures within water management to retain and store water in the country as well as building multi-use reservoirs with sufficient retention capacity, Stano said.

Krno added that together with the ministry they plan to draw maps of flood risks and flood threats, which should be completed by December 22. The maps should contain detailed sketches of risky areas located near water, based on which they will be able to prepare plans to manage flood risks and to use as a foundation for anti-flood measures.

When asked about which measures from the land revitalisation programme for 2010-12 will be included in the new strategy, Kravčík mentioned the principle of retaining rainwater close to where it falls, and draining runoff water that does not absorb into the ground.

“This is a European trend which harmonises the adaptation to climate change since it does not solve only flooding, but also water erosion of land and ever-lengthening periods of drought,” Kravčík told The Slovak Spectator, adding that the result “is not only effective water management and protection of natural resources, but also the revitalisation of climate and development of those sectors of the economy whose base is water”.