THE CONSTRUCTION sector in Slovakia was among the worst affected by the economic crisis. Though the situation on the market is gradually improving, as the latest data on construction output indicate, companies active in the sector are not optimistic, saying that the sector’s output will drop by another 4.6 percent this year. 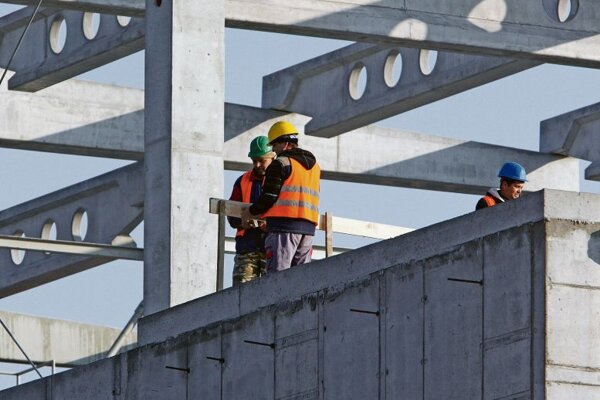 THE CONSTRUCTION sector in Slovakia was among the worst affected by the economic crisis. Though the situation on the market is gradually improving, as the latest data on construction output indicate, companies active in the sector are not optimistic, saying that the sector’s output will drop by another 4.6 percent this year.

“2013 will not be the year of stabilisation of the construction sector,” said Jiří Vacek, head of the CEEC Research company which carried out the survey among 100 construction firms active in Slovakia, as quoted by the Sme daily.

An improvement in the situation might come about with the realisation of big infrastructure projects, as well as via a new construction law which the Transport Ministry plans to present to the government this autumn.

Construction output in February fell by 4.2 percent year-on-year, amounting to €239.6 million, compared to a 14.1-percent fall in January, and a 16.5-percent contraction in December 2012. After adjusting for seasonal effects, production was 4.2 percent higher in February than in January, according to Statistics Office (ŠÚ) data.

Production realised by construction companies within Slovakia dropped by 2.5 percent year-on-year to €227.7 million in February, while domestic output’s share of total construction output rose by 1.6 percentage points to 95 percent. The situation was affected by a decline in work on new projects, including modernisation and reconstruction, which fell by 5.6 percent. Work on repair and maintenance, on the other hand, rose by 6.8 percent year-on-year, according to the ŠÚ.

The share of new construction projects within domestic production, including modernisation and reconstruction, was 72.5 percent, 2.3 percentage points less than in February 2012. The share of work on reparation and maintenance increased to 26.5 percent. The volume of work on engineering constructions rose by 27.3 percent, while on buildings it dropped by 8.1 percent, the ŠÚ reported.

Construction output by Slovak companies working abroad dropped by 27.9 percent year-on-year; its share of the total volume of production stood at 5 percent in February, according to the ŠÚ.

Since the beginning of the year construction output reached a volume of €446 million, which is 9 percent less than in the previous year. Production realised in Slovakia dropped by 9.1 percent to €423 million, while construction abroad fell by 8.3 percent, the ŠÚ reported.

Though construction firms are not very positive about the development in the sector this year, Vacek of CEEC Research says that they are optimistic about 2014, when they believe the sector might stabilise. The situation will depend on public-sector orders, he said, as reported by the TASR newswire on April 9.

The construction companies said in the survey that the revenues of a majority of firms will drop by 3.3 percent this year, with small and medium-sized companies being the most affected. Big firms, on the other hand, expect to see a stabilisation, mostly thanks to big state investments in infrastructure, which should amount to €8 billion up to 2016, the SITA newswire wrote.

“If the National Highway Company succeeds in finishing procurement of three ongoing competitions, as well as procurement of another five highway constructions, 2013 should not be a year of contraction, but these constructions will be fully reflected in the growth of the sector in 2014,” Ondrej Šinály, who heads building firm Eurovia SK, told Sme.

The survey also showed that Slovak construction firms are currently working at 63-percent capacity. According to Vacek, this relates to the end of the winter season. The load is lower than in November 2012 when it reached 72 percent, but 5 percentage points higher than at the same time last year, TASR wrote.

At the moment, the Transport Ministry is finishing preparation of a draft construction law, which it plans to present publicly in the coming weeks. After expert discussion, the law will be submitted to the cabinet in September. The ministry expects that if it is passed by the cabinet and by parliament it will come into force on January 1, 2014, SITA wrote.

The current law has been in force for 40 years, and does not suit current conditions on the market, the ministry said.

“The state cannot fully compensate for the fall in demand in the private sector, but has to set a quality legislative framework and use the unique opportunity offered by European funds,” said Transport Minister Ján Počiatek, as quoted by SITA, adding that the improvement in the quality of the transport infrastructure via EU structural funds is the main priority of the ministry as well as the government.

According to the minister, the new law should be the result of a broad public and expert discussion, and the whole political spectrum should agree with it.

“I do not want it to be a clerical law made up by clerks,” Počiatek said, as quoted by SITA.