Getting more passengers on the trains

MORE than one year has passed since the first private company began providing state-subsidised passenger rail transport in Slovakia. The Transport Ministry has mixed feelings about its operation, while passengers have benefitted from the arrival of the new rail carrier the most. With the improved quality of transport and services along with more frequent trains, the new carrier has made rail transport attractive again for passengers, who by switching cars for trains have reduced traffic on already jam-packed roads. 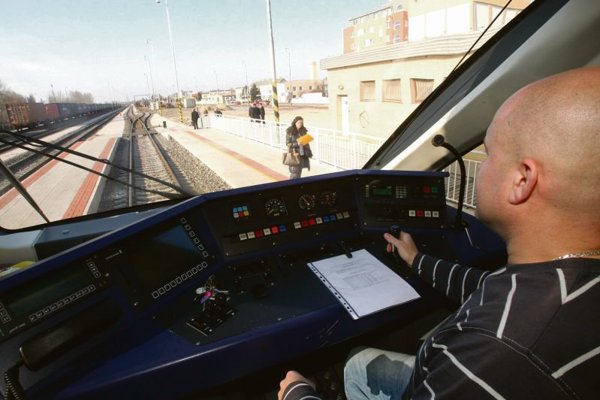 The view from one of RegioJet'snewtrains (Source: SME)
Font size:A-|A+0

MORE than one year has passed since the first private company began providing state-subsidised passenger rail transport in Slovakia. The Transport Ministry has mixed feelings about its operation, while passengers have benefitted from the arrival of the new rail carrier the most. With the improved quality of transport and services along with more frequent trains, the new carrier has made rail transport attractive again for passengers, who by switching cars for trains have reduced traffic on already jam-packed roads.

“The arrival of the new carrier can be assessed positively,” František Kocur, an expert on railway transport at the Transport Research Institute, told The Slovak Spectator. “It increased the number of travellers using the services of the RegioJet company compared with the state carrier ZSSK, brought a new quality to the offer and by this it has set the quality level of transport.”

RegioJet, a member of the Czech Student Agency group, began operating regional rail service on the route linking Bratislava, Dunajská Streda and Komárno, south-east of the capital, on March 4, 2012, replacing ZSSK and promising to improve the quality of rail passenger transport. By meeting this promise, and benefitting from the rising price of petrol, RegioJet has got more people onto trains and relieved the overcrowded roads around Bratislava.

During the first year of operation it transported more than 1.5 million passengers, an almost 98-percent increase compared to when the line was operated by ZSSK.

The Bratislava-Dunajská Streda-Komárno route is 100 kilometres long and the significant volume of new housing that has been or will be built along the route promises to further complicate the already difficult situation on local roads, especially at peak commuting hours.

The private carrier is satisfied with its operation and performance in Slovakia.

“RegioJet started to run the route, whose potential had not been utilised before at all,” Aleš Ondrůj, spokesperson of the company told The Slovak Spectator, adding that ZSSK was not able to respond to the requirement of the state to secure a cheaper operation with quality trains and with other services in a way that would attract new passengers and get them out of their cars and onto trains. “RegioJet has managed this.”

RegioJet operates the route with air conditioned trains, free internet and daily newspapers. Its trains are more frequent and also reduce travelling time. It has also invested in new parking lots at railway stations for commuters from villages near the route.

ZSSK views RegioJet as both a partner and a competitor which may help to improve rail services.
“Their activities have focused primarily on drawing people onto trains, which has [received] a certain response, while they bet on the quality of provided services,” Slavomíra Šubrtová, ZSSK spokesperson told The Slovak Spectator, adding that ZSSK is also trying to prepare various bonuses and discounts for passengers. “The liberalised environment is here and we should learn to move within it. This means that the rail transport market is opening, competition is arriving and those with better services will win. The future is about clear rules in competing for rail transport conducted in the public interest and only in exceptional cases via a direct assignment.”

According to the Slovak Ministry of Transport, Construction and Regional Development, there have not been any major problems with RegioJet meeting its obligations in the contract, which was signed in December 2010 by the ministry’s representatives and the carrier during the term of the previous government.

However, the current ministry is critical of the fact that the ministry, led at that time by Ján Figeľ, did not hold a tender for the licence to operate the route, and signed the contract after negotiations with the carrier.

“Because of the incorrect managerial decision of Ján Figeľ, RegioJet, on the Bratislava – Komárno route, is nowadays subsidised by a higher sum than ZSSK … when it ran the route,” Martin Kóňa, the spokesperson of the ministry told The Slovak Spectator, adding that because of the higher number of trains RegioJet gets €6.98 million from the state annually while ZSSK received €4.74 million. This increase has helped RegioJet carry more passengers, and the €2.2 million difference between the previous and current annual subsidy is missing on other routes.

RegioJet points out that when the subsidy is calculated per passenger, the state subsidy is now €1.74 lower, which means a reduction of costs by 27 percent compared with ZSSK.

Ondrej Matej, the director of the Institute of Transport and Economy, an independent think tank, criticises the way in which RegioJet arrived in Slovakia as an unsystematic step, stressing that the private carrier got a lucrative route which the state modernised with public money.

RegioJet responded that it did not require any modernisation and that it would also meet its obligations under previous conditions. Ondrůj added that it would be a more systematic solution if the state held tenders for other routes and in this way achieve a higher quality of services for a lower price.

The ministry is open to other potential passenger railway carriers.
“The door at the ministry is open for any carrier interested in operation of rail transport everywhere where trains do not run nowadays,” said Kóňa. “The condition is that it would not require any subsidy from the state.”

According to Kóňa, with regards to the further liberalisation of state-subsidised passenger rail transport, this will be a gradual process. Currently the ministry is re-organising railway transport, moving trains from less used routes to those used by a higher number of passengers, introducing regular time intervals between trains and harmonising train and bus transport so that they do not compete with each other on individual routes, as both of them are state subsidised.
“When this process is completed, it will be possible to also approach further liberalisation of rail transport,” said Kóňa.

RegioJet is prepared to participate in any tenders for state subsidised regional or express trains and to offer cheaper solutions with better services. But as Ondrůj said, it does not need to be the state that subsidises rail transport on less popular routes. It could also be municipalities or companies, for which it may be of key importance to have trains transport employees for them.

RegioJet is not the only private operator eyeing rail routes in Slovakia. The Czech company LEO Express is another carrier mentioned as being potentially interested in running trains in Slovakia.

“For the time being we are working on several variants of development of our activities in the central European region, including Slovakia,” Andrea Hofmanová, PR and communication manager at LEO Express told The Slovak Spectator. “With regards to the situation on the competitive market we do not want to make our strategy public.”

According to Kocur, each new carrier would choose a route which it can operate effectively. The interest may focus on routes to bigger regional centres, for example around Nitra, Žilina, Košice or routes in eastern Slovakia.

But the biggest challenge for rail transport in Slovakia is a decline in the number of passengers, which has been decreasing since 1995, and in 2012 dropped to almost 50 percent. Kocur specified that while in 1995 the number of transported passengers was 89.4 million, in 2012 it was only 45.1 million.

He says an increase in the standard of living has caused people to prefer cars over trains, and that the drop in rail passengers can also be attributed to development of the country’s highway network, slow reconstruction of railways and low quality of railway transport – which improved only recently after the purchase of new trains and the introduction of new timetables based on the principle of train departures in regular intervals.

Kocur specified that the state subsidises the passenger rail transport, providing €205 million to ZSSK and about €200 million to the rail operator ŽSR each year.

“It is necessary to use the money effectively for the benefit of passengers,” said Kocur.