Sellers have to do more than just sell books 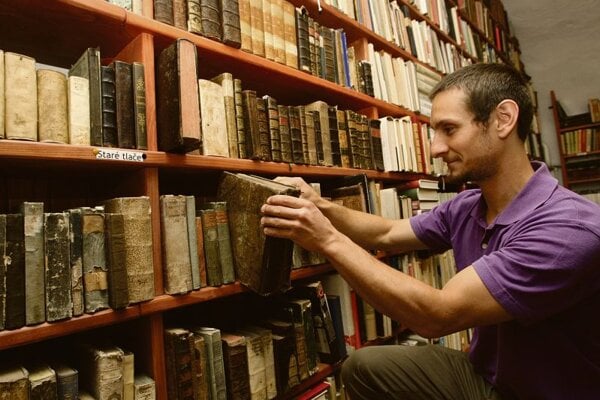 MARCH has been designated the Month of Books in Slovakia. While some suggest that March was chosen to celebrate the culture of books in memory of Matej Hrebenda-Hačavský, a Slovak folk writer and educator who lived between 1796 and 1880 and whose birth and death both occurred in March, there may be some practical motives behind the timing. Sales by book sellers are traditionally at their lowest in March and making it the month of books seemed like a good way to bring attention to books and bookstores, Martin Štrba, the Martinus’ e-shop director told The Slovak Spectator. Book sellers Arftorum and Gorila.sk say that the last Month of Books did not provide much of a sales boost, and both businesses continue to struggle due to the economic crisis.

Ján Laš of Beyond Media Company, which runs the Gorila.sk internet bookstore, told The Slovak Spectator that his company’s sales in March differed little from other months, adding that “as far as sales are concerned, we reach the highest turnover at the end of the year”.

Yet it is hard to estimate how much the crisis has affected book sellers.

“On one hand the purchasing power of the population is decreasing, but on the other hand, people who like to read continue to buy books, only they pay more attention to the price when buying books,” Štrba said.

Technological progress has impacted the book market, with Štrba noting that although e-books are still relatively new, their sales have been growing significantly faster compared to the same months last year.

“However, it [the growth of e-book sales] does not happen at the expense of print books,” Štrba said, adding that at Martinus demand for e-books increased by 250 percent from 2011 to 2012.
According to Štrba, the main reason is the wider availability of e-book reading devices and a more expansive offer of e-books as well as changes in the behaviour of customers who no longer view paper books as the only option.

However, the amount of e-books sold remains marginal and does not equal 1 percent of all books sold in Slovakia, Laš of Gorila.sk said.

Monika Kompaníková, PR manager of Artforum bookstore, does not expect electronic versions of books to push traditional bricks-and-mortar bookstores out of the market.

“It is true that some newspapers disappeared after people stopped buying them in print, but I think there will always be people who want to hold a well-written book printed on quality paper in their hands,” Kompaníková told The Slovak Spectator.

The crisis has affected every sector of the market and unlike food, people can survive without books, and thus under financial pressure, people are buying books less frequently, Kompaníková said.
“To survive the upcoming months and not have to close another bookstore we [Artforum] have to make a really great effort to lure people to the bookstore in ways other than just by putting books on the shelf,” Kompaníková said, listing various events, public readings, debates, concerts and presentations, adding that “even though books are a commodity, they should be treated differently than yogurt or meat; people should talk about them, discuss and choose them carefully”.

Martinus experienced an increased number of visitors in March, mainly due to its Book Challenge competition and the accompanying media coverage. The competition came in the form of a humorous quiz and it attracted about one third more customers than in the previous month, said Štrba.

Artforum often uses its café spaces to hold events and Kompaníková sees the trend of connecting bookstores and cafes as positive in cases when they cooperate as partners, since this symbiosis is advantageous for both sides. Slovak bookstores adopted this trend from other countries and its aim is to create a pleasant environment where people like to spend their free time relaxing with a warm drink and a good book, Štrba said.

For Laš, cafes and bookstores are a very logical connection since the two compliment each other quite well.

“The tendency to connect bookstores with cafes, galleries or some other facilities, shows that static shelves with books will not be enough for [bookstores to] survive,” Kompaníková said.

Despite increasing sales of e-books, they remain rather “feeble”, according to Kompaníková, who cited as the main reasons for this diversification of the market and a lack of e-book content due to scepticism on the part of publishers, as well as limited availability of publishing rights for electronic distribution.

People derive pleasure from reading an e-book when travelling or on vacation, and e-books are good for when one may not want to keep a particular book, Radovan Ščibrany, Martinus’ manager of e-books said, as quoted by TASR newswire. Another advantage of e-books is that one device can contain an entire bookcase, and the customer can buy, download and start reading a book in a matter of minutes.

Readers can also adjust the font size and other parameters when using devices, and since there is no physical stock, e-books cannot sell out. In addition, their pricing is slightly lower than their paper counterparts, according to several booksellers, TASR reported on March 1.

On the other hand, people tend to have numerous books in their bookcases and read them repeatedly. Moreover, the battery of a reading device may run out of energy or the reader can accidentally delete an entire book, sometimes without being able to download it again. Also, loaning e-books can be complicated, and therefore Ščibrany does not think that they pose a serious threat to paper books.

“The first global success of e-books has [led to] fantastic predictions about the end of classic books,” Ščibrany said, as quoted by TASR newswire. “For sure, it has not been confirmed yet and we assume that it will not be for many decades at least.”