FOR THREE days Bratislava has made it onto the radar of international security experts, senior politicians as well as world media, including The Wall Street Journal, the International Herald Tribune, The Economist, the Financial Times and the BBC. 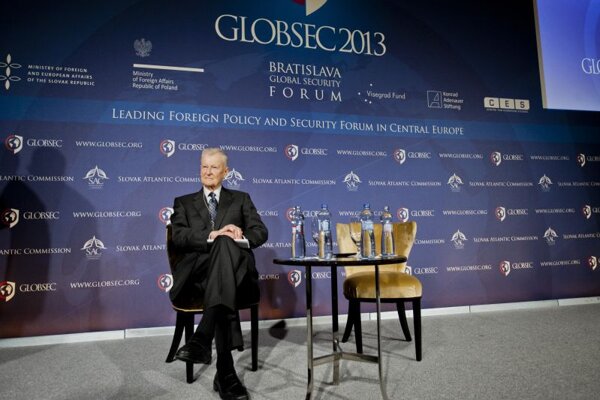 FOR THREE days Bratislava has made it onto the radar of international security experts, senior politicians as well as world media, including The Wall Street Journal, the International Herald Tribune, The Economist, the Financial Times and the BBC.

“I hope you will find answers to questions that concern us in central Europe,” said Prime Minister Robert Fico when opening the 8th annual GLOBSEC Bratislava Global Security Forum on April 18, adding that over time “it has grown much wider… covering all spheres of international relations”.

This year’s GLOBSEC, which according to the organiser, the Slovak Atlantic Commission (SAC), is one of the five most significant global security conferences, hosts more than 650 guests from 60 countries, including international senior officials and high-profile experts such as Zbigniev Brzezinski, the former national security advisor to US president Jimmy Carter.

Stronger cooperation between the Visegrad Four (V4) countries, i.e. the Czech Republic, Hungary, Poland and Slovakia; the proposed free trade agreement between the United States and the European Union; and the future of NATO after the end of its mission in Afghanistan made it to the top of the list of issues to be discussed.

Unlike in previous years, GLOBSEC 2013 was organised with stronger engagement by the V4, especially Poland, which currently presides over the group. Polish Foreign Affairs Minister Radosław Sikorski even assumed patronage of the event, and was actively involved in preparing the agenda, according to Róbert Vass, the founder of the GLOBSEC Forum, secretary-general of the Slovak Atlantic Commission, the organiser of GLOBSEC.

“Visegrad makes each of us individually and as a group stronger,” said Slovak Foreign Minister Miroslav Lajčák in his opening remarks on April 18, adding that he believes that the V4 has helped to serve as a successful form of regional cooperation.

When explaining the stronger focus on the V4 group, Vass suggested that the combined voting power of the V4 countries equals that of France and Germany together, however the countries have not been able to make use of this potential yet.

GLOBSEC has the ambition to take a closer look at defence cooperation and energy geopolitics with the aim of seeking ways to reduce the dependency of the central-European region on supplies of Russian natural gas.

“The timing could not be better; Poland is presiding over the Visegrad Group, it has only recently agreed to lead the first region’s own battle group and its foreign policy is to invest in strengthening the Visegrad ties more than ever before,” Vass said, as quoted in he press release.

One of the main themes of this year’s GLOBSEC could be called “From crisis to opportunities”, according to Vass, due to the fact that over the past two years there has been a tendency to view Europe as losing its strategic vision.

The conference is being held at a time when the EU faces one of the greatest economic and institutional crises since its establishment; transatlantic connections are being weakened by cuts in the defence budgets in Europe; NATO is making preparations for the withdrawal of its troops from Afghanistan and the US is shifting its focus to security challenges in other parts of the world such as Syria, Iran and South Korea, according to Vass.

One of the reasons for organising a conference like GLOBSEC was that countries from central Europe often had no chance to attend discussions over strategic issues, and could comment only on their results. Therefore, the aim of the forum is to get the central-European region “from the European and Transatlantic periphery to its centre”, Vass told the press conference on April 11.

The Slovak Spectator went to print before the major panel discussions took place. However, the planned agenda included the following issues: ways for Europe and the US to regain “their position as political leaders, for consolidation of their economies and improvement of their competitiveness” towards China and other developing economies.

The panellists came to Bratislava also to focus on the relations between the EU and its neighbours, especially the Eastern Partnership, the Balkans, the Middle East and North Africa. GLOBSEC chose the issue of partnerships due to the fact that the EU, because of its own internal problems, is not able to continue in its goal “to extend the area of democracy, prosperity and security beyond its borders”, according to the press release.

In addition to the main programme, GLOBSEC 2013 also offers various closed sessions at which the invited experts discuss, for example, energy security and the price of energy within the GLOBSEC Energy Forum, or the Transatlantic Trade Deal Policy Session, dealing with the possible establishment of a transatlantic trade zone, which might become the second pillar of relations between the EU and the US based on which they can support economic growth and create new jobs, according to Vass.

The traditional part of GLOBSEC is also the Gala Dinner, an event dedicated to those who “have given their all to strengthen democracy and stability in this region”, according to the press release.

This will see the granting of the Czech and Slovak Transatlantic Awards, which this year go to Jan Krzysztof Bielecki, a former prime minister and minister of European affairs of Poland, for his role in the democratisation, economic development and European and Euro-Atlantic integration of Poland and other central European countries, and Oldřich Černý, a leading Czech security policy practitioner and a close friend and colleague of former Czech president Václav Havel, in memoriam.