A MASS exodus of members from the liberal Freedom and Solidarity (SaS) party is yet another symptom of the ill health of Slovakia’s centre-right forces, the parliamentary opposition to the single-party government of Prime Minister Robert Fico. While the departure of Jozef Kollár and numerous party colleagues from SaS does not necessarily spell the end of the party, as political analysts note, their move has prompted another round of questions about new, revived centre-right formations.SaS loses prominent members 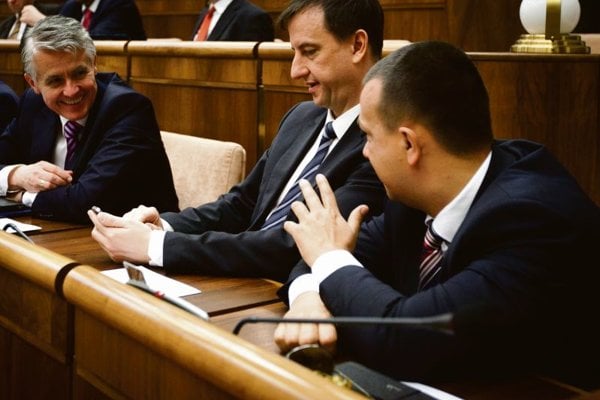 A MASS exodus of members from the liberal Freedom and Solidarity (SaS) party is yet another symptom of the ill health of Slovakia’s centre-right forces, the parliamentary opposition to the single-party government of Prime Minister Robert Fico. While the departure of Jozef Kollár and numerous party colleagues from SaS does not necessarily spell the end of the party, as political analysts note, their move has prompted another round of questions about new, revived centre-right formations.
SaS loses prominent members

Two former ministers from the Iveta Radičová cabinet, Juraj Miškov and Daniel Krajcer, MPs Martin Chren and Juraj Droba, and party caucus leader and unsuccessful leadership candidate Jozef Kollár all announced they were leaving the SaS caucus and party on April 16. An additional 75 members left the party with them, including nearly a third of its regional heads and almost half of its team leaders, who, according to Kollár, are key in creating the party’s programme.

The MPs say that they still share the same values as Richard Sulík’s SaS, but they are critical of his political style.

Upon leaving the party Kollár and his fellow renegades founded a civic association called Liberal Agreement, “for all those who are close to liberal values and at the same time close to the way of politics that we are close to as well”, Miškov said.

The SaS renegades did not rule out any possibilities as to where the association might be headed, be it turning into a political party, or merging with politicians who belong to the “new right” – mainly defectors from the “old” rightist parties, particularly the Christian Democratic Movement (KDH). Kollár confirmed that they are holding informal talks with Radoslav Procházka and Daniel Lipšic, both ex-KDH.

“We have been addressed by our colleagues to create a new right, which would be able to stand up against Robert Fico in the 2016 elections,” Kollár told journalists.

Their decision to leave the party was preceded by heated debates among the liberals that followed Kollár’s defeat in an election for the party leadership in late March to the incumbent, Sulík.

Kollár and Sulík met once in person after the election to discuss the future of the party, but both left the meeting saying that they were unable to find common ground. The exchange of opinions among members of what was dubbed “the internet party” when it was founded, mostly occurred online, through blogs and Facebook posts.

On April 13 the Sme daily printed an interview with Miškov in which he apologised to the party’s voters for having brought down the government of Iveta Radičová over the vote on the European Stability Mechanism and the loan to Greece in October 2012.

“Finally, we got rid of a permanent conflict and we can now work on carrying out our programme,” Sulík reacted, as quoted by Sme, adding that as of April 16 he was only aware of 50 members leaving the party (which has a total membership of about 300).

Juraj Marušiak, a political scientist with the Institute of Political Sciences, part of the Slovak Academy of Sciences (SAV), defined the political line of Sulík’s SaS as aggressively populist and eurosceptical.

“The results of the 2012 elections show that there is room for SaS-style politics in Slovak society,” Marušiak told The Slovak Spectator, adding that in order to preserve it, Sulík will need to prove his ability to lead the party and show that SaS can continue and is able to function effectively.

The departure of five MPs, however, is expected to significantly weaken the party, since it most likely will not be able to preserve its parliamentary caucus, for which eight members are required, said political analyst Grigorij Mesežnikov, president of the Institute for Public Affairs (IVO) think tank.

“I expect them to start an interpretation fight about who was responsible for what happened,” Mesežnikov told The Slovak Spectator, referring particularly to the fall of Radičová’s government.

Meanwhile, on the more conservative side of the centre-right political sphere, Radoslav Procházka, who made it to parliament on the KDH slate only to leave the party in February this year when it failed to re-elect him to the board, has established his own platform, Alfa, which now exists as a civic association. He confirmed on April 14 that he would run in the 2014 presidential election and will try to do so as the joint candidate of all the right-wing parties.

“I think there’ll be victory in the end, all the rest is details for the moment,” Procházka said as quoted by the SITA newswire.

Political analysts however remain sceptical about his chances of succeeding in the presidential election, much less becoming the right’s common candidate, but they agree that this might not be Procházka’s actual objective.

“He is a realistic politician and this decision could serve some other ambition than being elected president; perhaps to try and establish a new project, a political party that could be a stepping stone for a long-term political career,” Mesežnikov opined.

A “decent result” of about 5-10 percent would mean that Procházka should be considered a relevant player in Slovak politics, according to Marušiak, either as a founder of a new political party or a potential election leader in some other formation.

Procházka, now an independent MP, promised to design what he called a ‘shadow state budget’ for 2014 as an alternative to the government’s budget, “which should offer people a clear idea of how we want this state to function”, SITA reported.

Procházka said he wants to cooperate on the budget with Kollár, but that he is not ready to establish a new party.

“Cooperation of people who have an interest in the generational and mental revival of Slovak politics doesn’t need to – and at this point even shouldn’t – take the form of a new political party,” he said.

The new right, as envisioned by Procházka, or Kollár and his fellow SaS defectors, however, does not coincide with the vision of other politicians who are seen as the right’s new generation.

“I don’t know whether anything like that is happening,” Daniel Lipšic, the leader of New Majority (NOVA) said, as quoted by Sme, when asked about the creation of the new right. “We are going our own way, but we are open for those who have a similar vision and a clean shield.”

Lipšic left the KDH shortly after the elections and established a new party together with Jana Žitňanská, another MP who left the KDH caucus with him.

Unlike the KDH and SaS, the SDKÚ has not seen an exodus of the younger generation, but there have been attempts to propose an alternative to the line of politics promoted by the current party leadership.

Such is the initiative of MPs Miroslav Beblavý and Lucia Žitňanská, called “We Are Creating Slovakia”. In February 2013 they announced a plan to hold a series of extra-party discussions around Slovakia, saying that “the political solutions of the 90s are no longer enough, and seeking solutions calls for new visions”.

“There are lots of people in Slovakia whose potential is not being put to use, despite the fact that this potential might be greater than anything the administrations governing the country have,”
Žitňanská said when introducing the pair’s plan on February 15, as quoted by the TASR newswire.
Like Lipšic, Beblavý said he is not aware of any debates about the new right going on.

The attempts of younger politicians, mainly Beblavý, Procházka and Lipšic, to come up with new projects, is a “generational revolt in a situation when the gates of the existing party establishments are closed”, Marušiak said, adding that such people do have potential in the long run.