A SLOVAK lawyer has died in hospital after being stabbed repeatedly in a particularly vicious attack committed on a public street in the Bratislava suburb of Karlova Ves. Ľubica Kolesárová – who had worked on the defence team representing Mikuláš Vareha, aka the Lord of Zemplín, in a high-profile tax fraud case – died in hospital on April 15. She left behind an orphaned son, aged 5. 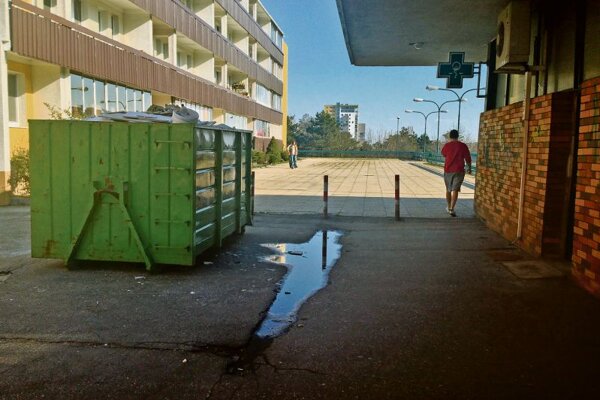 Kolesárová was stabbed near her home. (Source: SME)
Font size:A-|A+0

A SLOVAK lawyer has died in hospital after being stabbed repeatedly in a particularly vicious attack committed on a public street in the Bratislava suburb of Karlova Ves. Ľubica Kolesárová – who had worked on the defence team representing Mikuláš Vareha, aka the Lord of Zemplín, in a high-profile tax fraud case – died in hospital on April 15. She left behind an orphaned son, aged 5.

Early evidence suggested that robbery was unlikely to have been the motive for the attack since none of her personal belongings appeared to be missing. Slovak Police President Tibor Gašpar said that the murder might have been related to her work, the Sme daily reported.

“The police heard her [testimony] in certain cases as a witness and this might have a connection [with the murder], but there are several theories,” Gašpar said, as quoted by Sme.

Kolesárová, 35, was attacked in Karlova Ves at around 22:00 on April 14, and later taken to hospital in Kramáre with numerous stab wounds and a serious head injury. Despite the efforts of doctors, she died 11 hours after being admitted, said Bratislava University Hospital spokesperson Petra Stano Maťašovská, as quoted by the TASR newswire.

Witnesses said there was a single attacker, who left the scene without being apprehended, and who wore dark clothing and a black hood, TASR wrote.

Kolesárová’s murder prompted Sme to inquire about the status of the investigation into the murder of another prominent Slovak lawyer, Ernest Valko, who was found shot dead in his house in Limbach, near Bratislava, on November 8, 2010. The death of Valko, who served as deputy speaker of the lower house of the Czechoslovak federal parliament in 1990-1991, and in 1992 was chosen as the top official of the Czechoslovak Constitutional Court, shocked Slovak society. The circumstances surrounding his death remain unclear.

In a brief interview with Sme, Gašpar said that the only thing that the two murders have in common is that both the victims were lawyers. He added that the Valko murder investigation had not reached a stage at which charges can be brought against any suspect.

At the time of her death Kolesárová was running a business together with entrepreneur Ľubomír Somorovský, who last year was involved in a firearms incident with Russian businessman Alexandr Salmanov, who reportedly has interests in the distillery business. Somorovský alleged that Salmanov fired shots at him, Sme reported.

The police arrested Salmanov and his father Sergei hours after Kolesárová was stabbed, the Plus Jeden Deň daily reported on April 16. An investigator with the National Criminal Agency later charged them with bribery.

However, Police President Gašpar said, as quoted by Sme, that the Salmanovs’ arrest was not linked to Kolesárová’s murder.

Somorovský confirmed to Sme that Kolesárová had previously worked as a lawyer for firms which he ran together with the Salmanovs. On April 18, the daily quoted him as saying that she was “a direct witness”, and reported that she had given evidence against the Salmanovs to the police. Somorovský refused to provide further details about the case, saying that it might influence the investigation.

According to Sme, the police remain tight-lipped about the alleged bribery case over which the father and the son were arrested on April 15, but stress that their arrest the day after Kolesárová’s murder was a coincidence.

Sergei Salmanov is accused of fraudulently transferring shares in a firm, AB Cosmetics, from Somorovský to himself, according to Sme, which reported that a court had ruled that the transfer was not in line with the law and returned the firm to Somorovský.

Meanwhile, the Slovak Bar Association issued a statement on April 15 saying that while Kolesárová was a judicial clerk she had never been registered as an attorney. Vareha, a businessman who embezzled nearly €29 million from the Slovak state in a VAT fraud (see story on page 2), was represented by the law firm of Kolesárová’s husband, Juraj Kolesár. Kolesár, who also served as the honorary consul of Albania in Slovakia, committed suicide in 2011, according to Sme.