“EVERYTHING bad can have its good side,” Sabina Jankovičová, co-author of a new book listing Bratislava’s numerous, but hitherto little-noticed, public artworks, said at its launch. The book, Sochárske diela na území Bratislavy / Sculptural Artworks in Bratislava 1945-2012, written together with Roman Popelár, covers more than 700 statues and artworks over 800 pages. Ironically, the whole project, which lasted 15 months, was prompted by the destruction of a work of art. 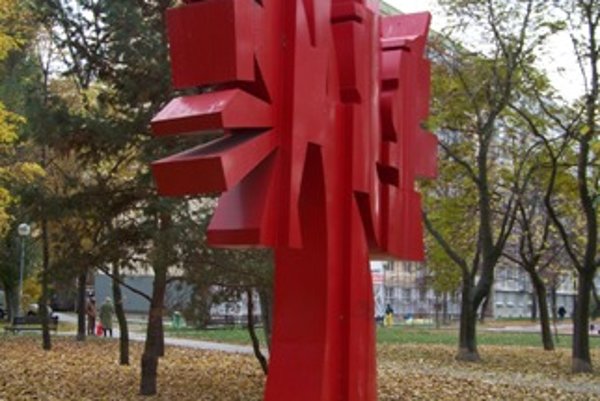 “EVERYTHING bad can have its good side,” Sabina Jankovičová, co-author of a new book listing Bratislava’s numerous, but hitherto little-noticed, public artworks, said at its launch. The book, Sochárske diela na území Bratislavy / Sculptural Artworks in Bratislava 1945-2012, written together with Roman Popelár, covers more than 700 statues and artworks over 800 pages. Ironically, the whole project, which lasted 15 months, was prompted by the destruction of a work of art.

In 2011, the statue Čas / Time by Sabina’s father, Slovak sculptor Jozef Jankovič, was inadvertently demolished. The sculpture, dating back to 1963-64, was one of first abstract works installed in a public space in the capital, in this case a small square in the Ružinov district. It survived the latter part of communism and the so-called ‘wild capitalism’ of the 1990s, only to fall prey to the construction of a new Lidl supermarket, the TASR newswire wrote. Both the then mayor of Ružinov and the developer said they had not known about the value and history of the work. To prevent such accidents, Jankovičová and Popelár decided to alert municipal representatives, preservationists and sculptors themselves by compiling a register of all statues in public areas – including those on company premises accessible to a significant number of people.

“It was only by chance that we learned about my father’s statue being torn down,” Jankovičová said. “Someone who knew the background went by, saw it and informed us. Father didn’t want any financial compensation – instead, he wanted something that would be beneficial to the whole of society,” she told the Sme daily. Partly as a result, Lidl became the sponsor of her book, which was launched on April 8 at the Cyprián Majerník Gallery in the Zichy Palace, in Bratislava’s old town.

The detective-like investigative work meant taking pictures of the works in the book, searching for their creators as well associated documents, determining the method used to create them, then measuring them and obtaining their GPS coordinates. This lasted from September 2011 till this January. Beginning with about 200 works, the authors finally ended up with just over 700. Their register is the largest, most systematic and best chronologically-ordered work ever published on the topic. The artworks will be listed online at resculpture.sk, and the list will change – with new ones appearing and some others vanishing for good.

For instance, Jankovičová said that reliefs by Erna Masarovičová that formed part of the travertine cladding of the office block of the Výskumný ústav zváračský / Research Institute of Welding disappeared one day before she had managed to document them and take pictures. Popelár, meanwhile, told the story of a damaged ceramic composition in Malokarpatské Square in the district of Lamač which vanished between June 29 and August 4. The municipality apparently decided to disassemble it and put it into storage instead of repairing it – supposedly for safety reasons. He also tells the story of a statue which he had heard about inside the Towercom complex. It was difficult to gain access – and even harder to take pictures – but finally, the author was defined. However, Jozef Jankovič, the expert guarantor of the project, cast doubt on the identity of the author, and so Popelár had to contact one of the architects of the Kamzík transmitter construction, who confirmed the authorship.

Austrian Erwin Wurm and Croatian Ivan Meštrovič are two foreign authors whose works can be found in the Slovak capital (the former on the Strabag building in Bajkalská Street and the latter in the Medical Garden park). Their works could form the basis for a more international list, Popelár said.

“The listing and mapping is an ongoing process: across the street, you can see some big legs, a work by Richard Keťko, which appeared after the book was printed,” Popelár explained to The Slovak Spectator. “Hence the online version …, which we want to update continually and gradually also add English texts. The current book is meant primarily for municipalities, preservationists and the expert public. But if a sponsor can be found, we would like to publish another version, also in English, for the wider public, ideally within a year or eighteen months.”