Secession at the GMB

THE CURRENT exhibition at the Bratislava City Gallery (GMB), called Artistic Treasures – Secession, features a wide selection of Art Nouveau works by world-renowned Czech painter Alfons Mucha, as well as other Czech and Slovak artists influenced by this style. Secession, in the Slovak context, is synonymous with Art Nouveau. 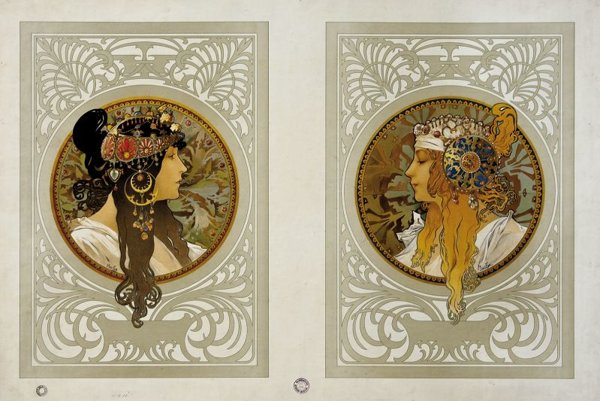 THE CURRENT exhibition at the Bratislava City Gallery (GMB), called Artistic Treasures – Secession, features a wide selection of Art Nouveau works by world-renowned Czech painter Alfons Mucha, as well as other Czech and Slovak artists influenced by this style. Secession, in the Slovak context, is synonymous with Art Nouveau.

The exhibition is the 17th to be curated by Jan Kukal for the GMB. “This one was the most demanding; we have been preparing it with various Czech and Slovak galleries for more than a year,” Kukal said as quoted by the TASR newswire. “But I am not sure if it can exceed the sheer number of visitors, 40,000, of the Mucha exhibition at the GMB’s Pálffy Palace back in 2001.”

The current selection, running until June 2, comprises 56 works by 17 artists, including paintings, drawings, colour lithographs and statues “which we managed to borrow with enormous difficulty”, Kukal said in a foreword, adding that a follow-up is planned for 2014, called Legends of the World Secession. “In total, 26 works are from private collectors and several are being exhibited for the first time ever,” Kukal stressed.

Secession, known also as Liberty in Italy, Modern Style in England, Art Nouveau in France and Belgium, Jugendstil in Germany, Wiener Sezession in Austria and Modernismo in Spain, is an international style of art, architecture and applied arts from the turn of the 19th and 20th century, Kukal writes. The Latin word secesio means withdrawing from an organisation or union, implying that the artists of the Secession wanted to dissociate themselves from the conservative constraints of academic art and historicism. “It is the last international decorative style which dominated not just painting, sculpting, architecture and applied art and crafts, but a whole lifestyle,” the curator explains. Secessionists rejected the order of straight lines and right angles in favour of curves evoking the feeling of airiness and grace, Kukal wrote. The artists of this style drew inspiration from the graceful shapes of flowers and the female form.

The most outstanding representative of this style is Alfons Mucha, a native of the southern-Moravian village of Ivančice, who managed to study in Munich and Paris, and whose moment of glory came during Christmas 1894, when all established artists were on vacation and he thus got an order to make a poster for the play “Gismonda” starring Sarah Bernhardt. The Lemercier printing house even hesitated to show the lithographed poster to the actress, so unusual was the depiction. However, not only was she enthusiastic about it, but the whole of Paris, and later the world, embraced Mucha’s unique style. Mucha later moved to New York, where he was greeted by thousands on his arrival in 1904, and a special edition of the New York Times was dedicated to him. His work was so distinctive that it was labelled Mucha Style, the leaflet accompanying the exhibition says.

The exhibition in Bratislava shows other works in addition to Mucha’s, which occupy one whole room, including paintings by László Mednyánszky (known as Ladislav Medňanský in Slovak) and František Kupka, which are presented together for the first time ever. Also featured are works by Košice visionary Anton Jasusch, the internationally famous Martin Benka and others whose early works were clearly influenced by the genre. Most of them drew inspiration from nature, but there are some urban still lifes too. One of the supreme figurative paintings of the Secession is a triptych by Jan Preisler, Jaro / Spring. Statues by Josef Václav Myslbek and Jan Štursa complete the picture of the Secession style.

The exhibition, on the second floor of the Mirbach Palace, dedicates one entire room to Mucha’s work and several other rooms to other Czech and Slovak artists. Although not big, it is quite comprehensive and offers a taste of how this distinct style was perceived and expressed by Czechoslovak artists, both living at home and abroad. There is a 40-page catalogue (for €6) which sums up (in Czech and English) the essence of the exhibited artworks. There is also a leaflet in English that can be borrowed from either the ticket-office or the museum staff on the second floor.

The exhibition will run at the Mirbach Palace, Františkánske Square 11 in Bratislava, until June 2; it is open daily except for Mondays, 11:00-18:00; tickets cost €2-€4. More information can be found at www.gmb.sk/en.