THE WORLD’S sole nuclear plant to have been completed but never plugged in was built in Austria. The country’s rejection of nuclear power in a national referendum prevented the plant from ever becoming operational. Today it is the site of the country’s biggest photovoltaic park, and has even been used as a filming location, explained Markus Wuketich, the ambassador of Slovakia’s environmentally conscious neighbour, Austria. 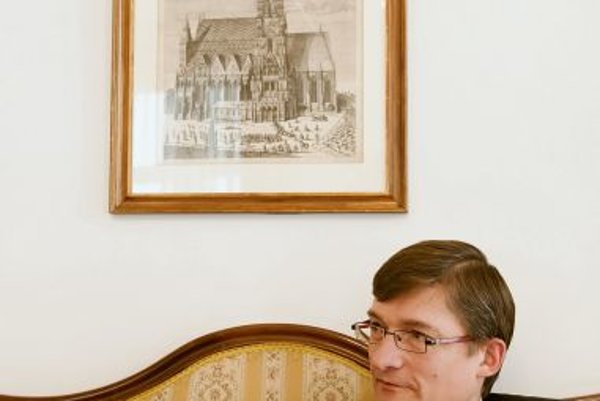 THE WORLD’S sole nuclear plant to have been completed but never plugged in was built in Austria. The country’s rejection of nuclear power in a national referendum prevented the plant from ever becoming operational. Today it is the site of the country’s biggest photovoltaic park, and has even been used as a filming location, explained Markus Wuketich, the ambassador of Slovakia’s environmentally conscious neighbour, Austria.

Wuketich grew up close to the border that his homeland, Austria, shared with Czechoslovakia, from which he could always see Bratislava Castle and Petržalka’s blocks of flats, the so-called paneláky, and he is a strong supporter of establishing bridges between the two countries: be they economic ties, a mental connection or actual bridges, like the new pedestrian and cycling bridge linking Schloss Hof and Devínska Nová Ves.

The Slovak Spectator spoke to Wuketich about environmental issues, such as municipal waste collection, electric vehicles, as well as how Austrian businesses view Slovakia’s business environment, and Slovaks’ interest in studying German.

The Slovak Spectator (TSS): Last year the bridge over the Morava River linking Devínska Nová Ves and Schloss Hoff was completed. Has its opening met Austria’s expectations? Could you brief us on the state of other projects to connect the infrastructure of Austria and Slovakia, through roads, cycling or railways?
Markus Wuketich (MW): The pedestrian and cycling bridge linking Schloss Hof and Devínska Nová Ves fully met our expectations. In autumn 2012, around 1,000 cyclists crossed the bridge on the weekends. We are quite confident that this positive trend will even strengthen with the start of the spring season. The next cross-border cooperation project we envisage is a road bridge connecting Angern and Záhorská Ves. This project will also be funded by the European Union. The Austrian and Slovak side want to finish it during the upcoming EU financial programming period, 2014 – 2020.
There are also other transport infrastructure projects under consideration, such as constructing and connecting the Austrian S8 and the Slovak D4 motorways, or improving the railway lines between Austria and Slovakia in order to make them suitable for high-speed trains.

TSS: Austria tops the charts with municipal waste recycling with a rate of 63 percent, according to the European Environment Agency (EEA), while many countries are in danger of failing to meet EU targets by 2020. In Slovakia this rate stands at 8.6 percent. What measures has Austria taken to achieve such a high rate?
MW: Austria enacted several regulations prescribing obligatory collection and recycling of different waste streams, such as packaging waste, biogenic waste and waste from electrical or electronic equipment. The regulation on landfills stipulates that waste to be deposited must not exceed the total organic carbon – meaning the material derived from decaying vegetation, bacterial growth or metabolic activities – of 5 percent. So waste from households has to be treated prior to land-filling. Additionally, for any land-filled or incinerated waste, a remediation contribution has to be paid. Thus, the costs for land-filling have increased and recycling is supported by remission of this charge.

In order to maintain the high level of waste management in Austria, particularly the success in separating household municipal waste, the population is informed continuously about waste prevention, re-use, proper waste sorting and collection as well as suitable treatment. In addition, there is a growing need to build awareness of waste management issues and sustainable consumer behaviour. To this end, the Austrian Federal Ministry of Agriculture, Forestry, Environment and Water Management supports nationwide campaigns and cooperates with the Austrian federal provinces, municipalities, waste management associations and businesses.

TSS: By 2020, the EU should boost the share of renewable energy to 20 percent of the energy mix. What are Austria’s targets and how is Austria planning to meet these?
MW: The EU climate and energy package sets a binding EU-wide target of 20 percent renewable energy in the overall energy mix by 2020. Each member state has to reach an individual target for the overall share of renewables in energy consumption. For Austria this national target is 34 percent; Austria's actual share of renewables is roughly 31 percent. The Austrian electricity sector is dominated by a very high share of hydro-power. The renewable share in the Austrian electricity mix (hydro-power and other renewables) is roughly 70 percent.

Since July 1, 2012, the Green Electricity Act has been in force. Its aim is to increase the amount of renewables in electricity production by 10.5 terawatt hours till 2020, with quantitative targets for each technology. The overall additional yearly support payments for feed-in tariffs in the year 2012 were €50 million. This money will be distributed over wind, hydro power and photovoltaics, and be reduced over the following 10 years to support renewable technologies on their path to commercial viability. With these efforts Austria should fulfil or even exceed the 34-percent target by 2020.

TSS: Austria, a stern opponent of nuclear power, has never plugged into the nuclear power station constructed in Zwentendorf. What has happened to this site? For what purposes has it been used?
MW: Zwentendorf was the only nuclear power plant that was built in Austria in the 70s. Following a negative referendum in 1978, the fully completed Zwentendorf plant had to be mothballed before it ever went into operation. With the nuclear disaster of Chernobyl, rejection of nuclear power has become even more determined and is deeply rooted in our minds now. Today the plant is one of Austria’s biggest photovoltaic parks. But it is also used for scientific training and even as a filming location.

TSS: Austria and Slovakia are participating in a project to support electrification of road infrastructure, called Vibrate. What is the current situation in Austria with usage of electric cars and building charging stations?
MW: E-mobility, or the use of electricity for transport, is by far not limited to cars!
It is the combination of all kinds of electric modes of transport, such as railways, subways, e-cars and so on. Every 10th bicycle that is sold in Austria is an electric bicycle, which extends the use of bicycles beyond the areas of their traditional use. When it comes to electric cars we have currently 1,410 e-cars on Austrian roads and 1,241 charging stations. These stations are listed on a website. As we have a programme for promoting and supporting the use of different types of electric transport, we expect the number of e-cars to grow considerably.

TSS: In a change from previous years, Slovakia was not rated in 2013 as the most attractive destination in the CEE region by investors active in Slovakia, falling behind the Czech Republic, according to a survey conducted by seven chambers of commerce active in Slovakia. Nevertheless, 81 percent of the 187 firms surveyed would still pick Slovakia as a destination for their investments. What are the most frequent challenges that Austrian businesses cite in connection with doing business in Slovakia?
MW: Today Austria and Slovakia are, I dare say, strategic economic partners. Around 2,000 Austrian companies are active in your country. Bilateral trade has reached a record volume of €5.8 billion in 2012. And Austria is among the top three investors in Slovakia. You rightly stated that the vast majority of those Austrian businesses are very positive about their investment in Slovakia. And this is an important and fantastic thing. If, however, companies face challenges when doing business in Slovakia, they mention things like difficult access to EU and national funds, a lack of transparency with regard to public tenders or legal insecurity. Some have the feeling that the business environment is more open to bigger rather than small and medium-sized companies.

TSS: In Austria, tourism and related services make up more than 7 percent of GDP. Has the ongoing economic crisis affected the tourism sector in Austria in any way? What kind of inspiration could Slovakia take from your homeland?
MW: Austrian tourism could not fully avoid the impact of the global financial and economic crisis. In 2009, incomes from international tourism sank by 7.9 percent. However, Austrian tourism has proven its ability to withstand the crisis.

Developments in the past few years demonstrated that people, even in economically uncertain periods, do not want to sacrifice their holidays. They tend to reduce spending by staying [for] shorter [periods of time] and cutting the costs of their stay. The Austrian National Tourist Board is now focusing on markets in neighbouring countries with the highest potential for domestic tourism. In its neighbourhood, Austria can score with fast arrivals, last-minute bookings and exceptional product quality.

The Austrian National Tourist Board has developed a programme of its own for each target market, which is constantly being adapted to new needs. The substantial contribution to the success of Austrian tourism, however, originates in the performance of hotels, pensions, gastronomy, etc. that on a daily basis fulfils the quality statement which is given to all the visitors by the National Tourist Board. Thus, Austrian tourism, with the so-called “Urlaub in Österreich” (Holidays in Austria), has been able to build a strong label.

The main principles of the Austrian tourism strategy, “New Ways in Tourism”, which was introduced in 2010, are strict coordination of marketing, innovation, targeted financial support, good infrastructure and improved business conditions for enterprises. All domestic tourism stakeholders are involved in implementing the policies set out in this strategy.

TSS: Two years ago, English became a mandatory subject in Slovakia for elementary school children. Has this move, in your opinion, in any way impacted young people’s interest in studying German?
MW: In our contacts with schools and universities we are told that fewer schools offer German lessons now and there is less interest in studying German at universities. This could be a consequence of the new legal situation. Demand for German courses, however, is increasing at the Austrian Institute and the Goethe Institute. This is a clear indication that young people are still interested in learning German. I am not surprised about this at all, since German opens up study possibilities and job opportunities not only in neighbouring Austria, but also in Germany and Switzerland. And companies from these countries always need German-speaking employees.