THE SITUATION at the Office of the General Prosecutor has become “unbearable” as its "non-functionality” has assumed "unseen proportions”, Prime Minister Robert Fico stated on April 30, when defending his ruling Smer party’s arguments for passing, via a fast-tracked proceeding, a revision to a law on the operation of the country’s Constitutional Court. The amendment, which foresees the implementation of the doctrine of necessity based on the so-called Bangalore principles of judicial conduct, is to solve the deadlock at the Constitutional Court, which has left only one out of thirteen judges not subject to allegations of bias by either general-prosecutor-elect Jozef Čentéš or President Ivan Gašparovič, who has been refusing to appoint Čentéš for nearly two years since he was chosen for the post by parliament. 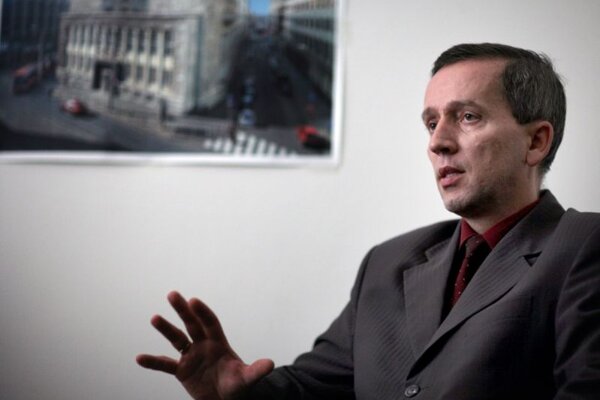 THE SITUATION at the Office of the General Prosecutor has become “unbearable” as its "non-functionality” has assumed "unseen proportions”, Prime Minister Robert Fico stated on April 30, when defending his ruling Smer party’s arguments for passing, via a fast-tracked proceeding, a revision to a law on the operation of the country’s Constitutional Court. The amendment, which foresees the implementation of the doctrine of necessity based on the so-called Bangalore principles of judicial conduct, is to solve the deadlock at the Constitutional Court, which has left only one out of thirteen judges not subject to allegations of bias by either general-prosecutor-elect Jozef Čentéš or President Ivan Gašparovič, who has been refusing to appoint Čentéš for nearly two years since he was chosen for the post by parliament.

Application of the doctrine will make it possible for judges who are otherwise excluded from deciding on a given matter to pass judgment if inactivity on the part of the court would lead to a denial of access to fair judicial treatment.

President of the Constitutional Court Ivetta Macejková herself proposed to apply the Bangalore principle, according to the SITA newswire.

Čentéš responded that the revision interferes with his right to a fair court hearing, and a former justice minister said that it increases the eventual chances of Čentéš’s case succeeding at the European Court for Human Rights in Strasbourg.

“No fast-tracked proceeding: it [the revision] will go to a regular first-reading at the May session,” Fico was quoted as promising on April 24 by the Sme daily.

Yet on April 30 he abruptly changed his mind, referring to “secret information” on developments at the Office of the General Prosecutor – which he claimed he could not share with the public – to justify prompt action, Sme reported.

“I am bound by that secret as the prime minister,” Fico said, adding that “information on the general prosecution, which suggests that there must be a change, is mounting”.

The term of the last general prosecutor, Dobroslav Trnka, expired in February 2011, but it took until June of that year for parliament to elect Čentéš as his replacement. However, Gašparovič then refused to appoint him, despite the Constitutional Court’s ruling in October 2012 that his election had been constitutional. In early January 2013, Čentéš filed an objection against Gašparovič's formal refusal to appoint him, after the president made a public statement that he would not appoint Čentéš.

Based on the approved amendment, the first originally drawn panel, composed of Justices Marianna Mochnáčová, Milan Ľalík and Peter Brňák, will decide over both Čentéš’ complaint and his request for a preliminary injunction to prevent another election for the general prosecutor from taking place until his case is decided. Yet Čentéš’s earlier objection against Brňák and Ľalík was accepted and as a result, the two judges were excluded from any decision-making on the matter.

Čentéš considers his rights to have been violated

Rather than promote justice, the approved revision “violates my basic right to a fair court proceeding and to a legitimate judge in a proceeding at the Constitutional Court”, said Čentéš, as quoted by SITA on April 30, adding that the legislative change is taking the case away from legitimate judges and giving it back to judges who have been lawfully excluded.

“The revision retroactively cancels the lawful decision of the Constitutional Court on the exclusion of biased judges, which is devastating for the rule of law and legal certainty,” Čentéš said, according to SITA. “If it is necessary to apply the doctrine of necessity, then in my opinion it should be applied to all consequences in a way that the result is defensible also at the European Court for Human Rights.”

According to Čentéš, the revision could only be defensible if all the justices of the Constitutional Court had been lawfully excluded and the decision would be made only among the excluded judges. However, only four judges have been lawfully excluded from deciding over the cases, Čentéš noted, adding that the remaining eight judges were subjected to an objection of bias but have yet to be lawfully excluded.

Čentéš suggested that this proceeding, which will lead to his case being assigned to lawfully excluded judges, might soon become a matter for the European Court for Human Rights.

Meanwhile, on April 30 yet another attempt at the Constitutional Court to break the stalemate in the Čentéš case failed. Previously, the court tried to resolve the situation on April 24 when, at a closed session, several alternatives were discussed. Yet, Macejková did not accept the procedural proposals submitted by several judges to the court’s operation schedule, arguing that she could not do so because of the ongoing parliamentary session, SITA reported.

Macejková said on April 30 that the result of the parliamentary discussion could influence the legislation regulating the operation of the court and thus also the possible work schedule, which, as an internal norm, must be in line with the law, SITA wrote.

Yet, one Constitutional Court judge, who refused to be named, told Sme that the situation is worse than the so-called ‘night of the long knives’ under the government of Vladimír Mečiar, referring to 1994, when Mečiar’ s Movement for a Democratic Slovakia (HZDS) seized power in all parliamentary committees and completely eliminated opposition parties from any influence in the committees. Sme quoted another judge as saying that if there had been a vote at the court, the situation could have been resolved.

Fico has decided that he wants his general prosecutor at any price, commented Lucia Žitňanská of the Slovak Democratic and Christian Union (SDKÚ), adding that the shortened legislative proceeding signalled “that Robert Fico decided to close the case of Čentéš very fast and at any price”.

“He does not care that by approving the revision the chances of Jozef Čentéš succeeding at the European Court for Human Rights in Strasbourg increase,” Žitňanská said, adding that she sees an analogy between Čentéš and one-time HZDS deputy František Gaulieder under the government of Vladimír Mečiar.

In 1996, when Gašparovič was serving as speaker of parliament as a nominee for HZDS, he facilitated a vote to strip renegade HZDS MP Gaulieder of his parliamentary mandate after he had criticised the party. Gašparovič accepted a parliamentary committee report stating that Gaulieder had agreed to resign his seat despite Gaulieder publicly denying that he had ever done so. Gaulieder was stripped of his mandate; a year later the Constitutional Court ruled that this violated the constitution.

The opposition Most-Híd party said that by passing the new legislation, Smer has secured the decision of the Constitutional Court, which will suit the party in the matter of electing a general prosecutor.

Political scientist Ján Baránek says that the fast-tracked proceeding passed in parliament has evoked a variety of suspicions, including one “that there is an effort to install a candidate of Smer”, SITA reported on April 30.

Ľalík and Brňák are the only judges to have been formally excluded so far.