SLOVAKIA is not particularly well known abroad for its wine production, but this is mainly because most of it is consumed locally. Quality has been improving in recent years, and Slovak wines achieved remarkable results at the Viniales Internationales Paris 2013 competition: with nine gold and 38 silver medals, they outperformed even those of France. In mid May Slovakia has an exceptional chance to further improve its image as a wine-producing country when its capital city, Bratislava, hosts the 20th Concours Mondial de Bruxelles (CMB) 2013, one of the world’s most prestigious international wine competitions. 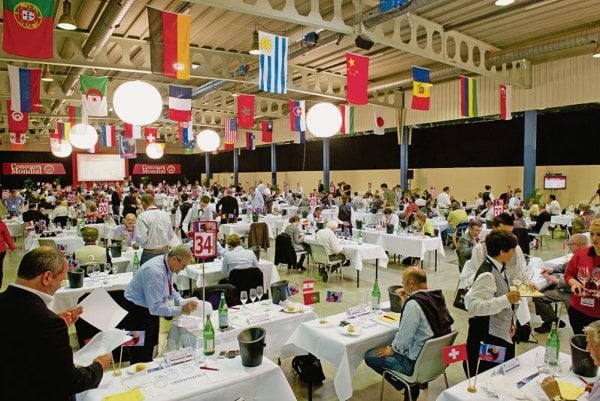 SLOVAKIA is not particularly well known abroad for its wine production, but this is mainly because most of it is consumed locally. Quality has been improving in recent years, and Slovak wines achieved remarkable results at the Viniales Internationales Paris 2013 competition: with nine gold and 38 silver medals, they outperformed even those of France. In mid May Slovakia has an exceptional chance to further improve its image as a wine-producing country when its capital city, Bratislava, hosts the 20th Concours Mondial de Bruxelles (CMB) 2013, one of the world’s most prestigious international wine competitions.

“Thanks to coming here [tasters] will find out what is happening in the world of wine, but they will also find a new wine region, Slovakia, which is maybe less known but has [a lot] to offer,” said CMB president Baudouin Havaux as he introduced the jubilee edition of the competition. “I’m very happy that I’m here, because this is not an accident: one of the goals of the Concours Mondial de Bruxelles is to watch the development of the wine market as well as new trends, and it is obvious that in central Europe and especially in Slovakia this development is very interesting.”

After the CMB moved outside Belgium in 2006, to be held in Lisbon, Maastricht, Bordeaux, Valencia, Palermo and other western European cities, its organisers decided to move further east, behind the former Iron Curtain. In a strong competition among neighbouring countries like the Czech Republic and Hungary, the contest organisers chose Slovakia to be the first country in the region to host the competition.

Thomas Brandl, CMB ambassador, who has been watching wine production in Slovakia for many years, sees the CMB as “opening the door”, and as a big chance for Slovakia.

“I think that this is a big, big chance for Slovakia and Slovak wine producers to get on the map globally with all the journalists who come, because more than 50 percent of the tasters are journalists,” said Brandl. “Coming to Slovakia for many years I know that there are good wines and the quality of Slovak wine has really risen tremendously during recent years; [it has been a] very good evolution.”

The competition will take place at the Incheba exhibition centre between May 10 and 12. Winemakers from 138 countries have entered a record 8,200 wine samples in the competition, to be tested by about 300 judges from 50 countries.

Slovakia will be presented by 214 samples at the exhibition, compared with about 50 samples last year. Slovakia also will be better represented on the jury, with 21 Slovak tasters, up from five last year.

The competition in Bratislava is being held in cooperation with the Slovak Tourist Board (SACR) and the Grape and Wine Producers of Slovakia (ZVHV), a trade body.

The programme will be divided between a ‘working’ part in the morning and a ‘social’ programme in the afternoons, when tasters will visit wineries and historical and cultural sites around Bratislava.

The wine tasting itself will be a kind of a spectacle, said Marta Kučerová, general director of SACR, explaining that every five minutes 250 trained future barkeepers and sommeliers will open wine bottles and distribute wine samples to tasters. The bottles will be masked and specially marked, with only 15 people having access to the key.

SACR and ZVHV regard the hosting of the competition in Slovakia as an opportunity to show that it is worth visiting the country not only for its castles and mountains, but also because of its wines.

“For us, the CMB is a huge opportunity to show what wines, whose quality is excellent, we have here in Slovakia,” said ZVHV executive director Jaroslava Pátková. “We here in Slovakia cannot afford to produce cheap, low-quality wines. In this [area], bulk producers beat us.”

“A positive feature of Slovakia is that we have very developed cultivation of new varieties,” said Pátková. “This is how we can establish ourselves in the world. Devín and Dunaj are wines that are also harvesting success in world competitions.”

Pátková says the Concours, which her organisation ranks as among the three to five most important wine competitions in the world, is a chance to show off these new varieties, because “you can taste Chardonnay almost everywhere in the world, but the Devín, Dunaj, and Mília varieties you can taste only here in Slovakia”.

Of Slovakia’s wine production, 90 percent is of the highest quality, bearing the label Wine with Protected Origin Designation (CHOP in Slovak). This is the highest European wine category, which is subject to strict protection. Synonymous with CHOP is the abbreviation DSC (Districtus Slovakia Controlatus). This quality category comprises quality wines and quality wines with descriptors.

The current acreage of Slovak vineyards is 14,000 hectares, but only about 10,000 ha is currently being harvested. In this respect Pátková pointed out that grape and wine producers in Slovakia, as in iconic wine regions such as Bordeaux, are facing pressure from property developers and that the acreage of vineyards is decreasing.

With regards to wine imports, Pátková said she welcomes fair competition among quality wines, but that wine producers are concerned about imports of cheap wine, which after being imported are commonly put into different bottles and masquerade as higher quality than they really are.

“This is why we see the Concours as a chance to show what quality wines are; to teach distributors as well as consumers to distinguish quality wines,” said Pátková.

“I think that the time for a new wave, which will balance these two tendencies between traditional countries and the so-called new countries, has arrived,” said Havaux. “We see this development also in central Europe. And Slovakia is a notable example of this development, where the quality of wine is really on a high level and keeps rising.”