Fraud on the rise, say insurers

SLOVAK insurance companies are reporting an increase in fraudulent behaviour by clients, ascribing this to the current difficult economic situation, some fraudsters’ visions of ‘easy money’, and the use of more sophisticated methods to uncover insurance fraud. Insurance companies have intensified their fight against fraud, pointing out that fraudulent claims lead to higher premiums for honest customers. 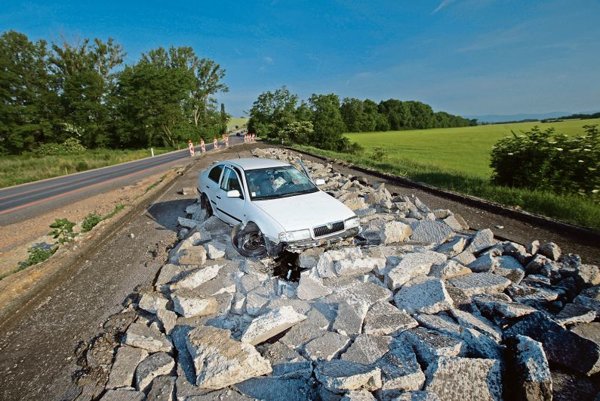 SLOVAK insurance companies are reporting an increase in fraudulent behaviour by clients, ascribing this to the current difficult economic situation, some fraudsters’ visions of ‘easy money’, and the use of more sophisticated methods to uncover insurance fraud. Insurance companies have intensified their fight against fraud, pointing out that fraudulent claims lead to higher premiums for honest customers.

The Slovak Insurance Association (SLASPO) confirmed an increase in insurance fraud and said there were several factors behind it.

“One of them is the economic and social situation,” Jozefína Žáková, SLASPO’s general director, told The Slovak Spectator. “The increase in the number of fraud attempts uncovered is also a result of the increased attention paid by insurance companies to checking reported insurance events and closer cooperation in this field. Last but not least, there is a high tolerance in society towards insurance fraud. It is not condemned as much as other crimes like theft, robbery, violence, murder and others.”

Viliam Kačeriak, a manager at KPMG’s forensic services department in Slovakia, also attributes the increase in insurance fraud to the worsened economic situation, which has led to higher unemployment. He said this was also proved by the kinds of insurance products in which fraud tend to increase – car insurance and accident insurance. He also referred to car repair shops and other third parties that may try to maintain their revenues via insurance claims. Another reason is the low enforceability of the law in Slovakia. On the other hand, improved methods by insurance companies for uncovering fraud are leading to an increase in the number of fraud cases detected. KPMG has registered an increase in the hiring of fraud risk management specialists as well as an increased interest in implementation of new technology to detect fraud.

Insurance Europe, the European insurance and reinsurance federation, estimates that detected and undetected fraud represents up to 10 percent of all claims expenditures in Europe. This figure varies between countries and classes of insurance according to a number of factors, such as how the market functions or the local prevalence of one type of insurance. SLASPO estimates that in Slovakia fraud accounts for about 20 percent of all compensation payments.

Insurance companies in neighbouring countries report increased cases of insurance fraud too.
“With regards to differences, in Slovakia cultural influences like the low willingness to report the fraudulent action of another person is important,” Kačeriak told The Slovak Spectator. “Another difference is the more specific environment when enforcing the law... In western Europe systems for detecting insurance fraud are more sophisticated and thus in Slovakia the risk of undetected fraud is higher.”

Fraud on the rise

Insurance companies in Slovakia are reporting an increase in insurance fraud in both life and non-life insurance. Allianz-Slovenská Poisťovňa (Allianz-SP), the biggest insurer in Slovakia, reported that 2012 was a record-breaking year for this. As in previous years it registered an increase in claims investigated in non-life insurance, up 24 percent compared with 2011, but the biggest increase occurred in life insurance, where it investigated four times more claims than in 2011. In total, Allianz-SP investigated 3,152 suspected cases of fraud, in which possible compensation amounting to more than €10 million was involved. Its suspicions were confirmed in 2,767 cases, amounting to 88 percent of those investigated. This meant that almost nine out of every ten investigated claims were found to have been attempted fraud.

“In spite of the results being publicised each year, the sentence for fraud being up to 15 years imprisonment, and various new binding measures in the fight against insurance fraud, naive attempts to cheat the insurance company are constantly repeated,” said Jaroslava Zemanová, head of the department of supervision and special activities at Allianz-SP, as quoted in the company’s report. “Some clients act as if they still do not understand that the insurance company is not an accounts department which will pay any claim without checking its justness and the authenticity of the data.”
The insurance companies report that the most fraudulent behaviour within non-life insurance is in car insurance, either liability or accident insurance. Next comes insurance of assets and liability insurance. In the life insurance segment most cases of fraud occur in accident insurance. Apart from insurance fraud committed by individuals there were also cases of fraud committed by organised groups as well as so-called white-collar insurance fraud.

Kooperativa Poisťovňa sees also a kind of “seasonality” in the occurrence of insurance fraud, when for example due to meteorological conditions more damage is caused to property and dishonest people try to make use of the situation, believing that they are more likely to deceive the insurance company, Katarína Vargová of Kooperativa Poisťovňa told The Slovak Spectator.

Lucia Makayová, spokesperson of Generali Slovensko Poisťovňa, cites examples like efforts by the insured person to include pre-existing damage in an otherwise legitimate claim.

Kooperativa uses information from the central register of insurance events, the results of expert examinations, checking of accounting documents and others to detect insurance fraud. Various IT applications are among the fraud detection tools used.

The insurance companies have specialised teams investigating suspicious claims. Kooperativa, for example, cooperates with a renowned detective agency, while Allianz-SP uses software that checks damage claimed on car insurance, according to Allianz-SP spokesperson Gabriel Tóth. Its success rate in detecting fraud is about 75 percent, he said.

According to Žáková, insurance companies have become more active in detecting fraud and have intensified cooperation.

According to Kačeriak, there are ways to combat insurance fraud, but these are not always used effectively. For example, exchange of data and information between insurance companies could intensify. Another tool is complex fraud risk management which includes, for example, knowledge of risks, internal control mechanisms, employee motivation, and training for investigators and liquidators of insurance events.

“Insurers are introducing more technology to detect fraud,” said Kačeriak, adding that these are not fully utilised yet. “At question are not only systems for analysing data, but also technologies to detect the authenticity of documents or usage of publicly available information.”