Blood and guts in ancient drama

FACED with the dilemma of what to do with a bus full of theatre theoreticians, reviewers, journalists, artists and dramatic advisers, touring Europe in search of great drama and due to visit Bratislava, the Slovak National Theatre (SND) decided to push the boat out and stage a work of classical Greek theatre, the tragedy Oresteia, with English subtitles. 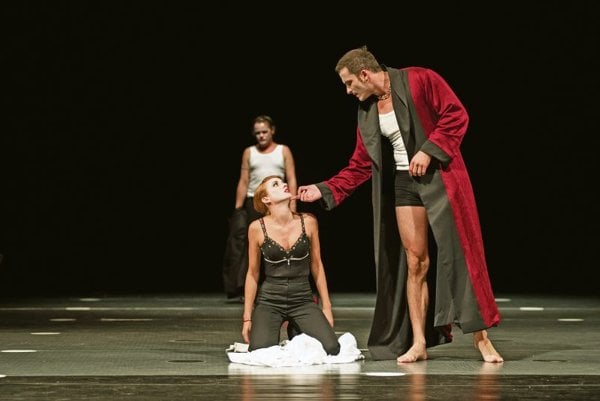 FACED with the dilemma of what to do with a bus full of theatre theoreticians, reviewers, journalists, artists and dramatic advisers, touring Europe in search of great drama and due to visit Bratislava, the Slovak National Theatre (SND) decided to push the boat out and stage a work of classical Greek theatre, the tragedy Oresteia, with English subtitles.

The bus tour marked the 25th anniversary of the European Theatre Convention (ETC), starting in Stuttgart, Germany, on April 18 and winding up in Zagreb, Croatia, on April 24. On April 23 the bus occupants participated in a press conference in Bratislava and then watched the SND performance.
Oresteia is the only fully preserved trilogy by ancient playwright Aeschylus. The Slovak staging, directed by Rastislav Ballek, combines the unabbreviated ancient dialogue with modern innovations like video-screening, modern costumes and contemporary acting – while still retaining elements of the original Greek drama, like the choir of citizens, and the presence of Furies, goddesses who avenge the murders of kin in Greek mythology.

The resulting work proved to be long and demanding for modern audiences, but although the original political context has faded the human side of the tragedy still feels strong, revolving around the vicious circle of sin and crime, revenge and punishment in which the crime is usually dictated by some “higher Fate” which seems unavoidable. The tragedy tells the story of the house of Agamemnon, king of Argos, who returns from victory in the Trojan War – for which he sacrificed his daughter, Iphigenia – only to be killed by his revenge-thirsty wife, Clytemnestra. His son Orestes – helped by another daughter, Electra – then takes revenge for his death by killing his own mother. The final act of the piece represents the “trial” in which his guilt (partially ordered by the god Apollo) is weighed against the guilt of his mother and his right to vengeance. Agamemnon’s family, or the House Atreus – i.e. Agamemnon’s father, seems to be cursed ever since Atreus killed all the sons of his brother Thyestes and offered the meat of their corpses to the unwitting father of the victims.
Thyestes then put a spell on his brother’s family.

The Bratislava cast included well known and lesser known actors, but they complemented each other well. The piece, almost three hours long (with one break) proved too long for some attendees, who left mid way through, but those who persevered, including the bus tourists, gave it a standing ovation at the end.

In the pre-performance discussion theatre director Roman Polák, who is the current head of the SND’s drama section, noted that the European theatre festival EuroThalia was organised in 2002 in Bratislava, for the first time in a post-communist country, but that it has not been staged by the ETC since, and that it would be nice to bring it back to where it last took place.

Another idea might also be worth trying: offering more drama in the SND with English subtitles (at least where such subtitles already exist, which is normally the case for works vying for festival prizes or previously performed abroad) from time to time, to give a taste of contemporary drama to local non-Slovak speakers.