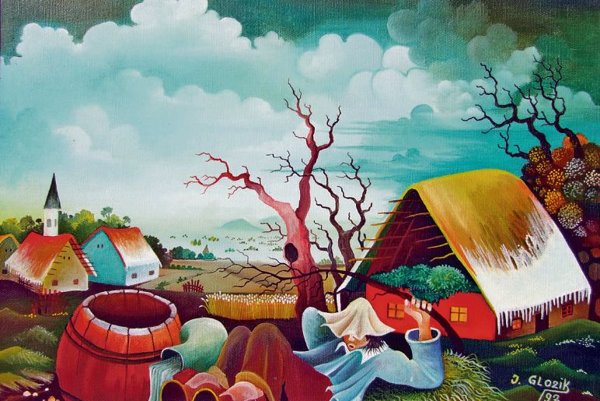 Bratislava
EXHIBITION: THE TYPO & Ars Gallery is currently showing “Naive Art from Kovačica”, the 6th such exhibition to feature the works of amateur artists from the ethnic-Slovak village of Kovačica, in the Serbian region of Vojvodina. Until May 24 it can be seen daily, except for Mondays, 14:00-18:00 (or by arrangement) at Roľnícka 349 in the Vajnory district of Bratislava. Admission is free, but visitors are advised to call ahead on 0903/477-074 or visit www.typoars.sk.

Bratislava
THEATRE: Uncertain Ground (intra-species aggression) – The alternative theatre company Stoka transformed its Slovak play Neistý grunt into English, and it was picked for the New York International Fringe Festival. Bratislava audiences now get a chance to see this “performance conceived by the method of collaborative creation, by means of improvisation, with no specific goals being set in advance”. Directed by Blaho Uhlár, the piece is performed by Braňo Mosný and Peter Tilajčík.
Starts: May 6, 20:00; A4 Nultý priestor, Karpatská 2. Admission: €3.50-€6. Tel: 02/ 5292-4470; www.a4.sk.

Bratislava
PUPPET THEATRE: Soľ nad zlato / Salt over Gold - Kamil Žiška – The famous fairytale was adapted for puppet theatre from the work of Slovak writer Pavol Dobšinský and for six days it will be performed in English.
Starts: May 10-May 15; va-rious times; Bratislava Puppet Theatre, Dunajská 36. Admission: €3. Tel: 02/5292-3668; www.babkovedivadlo.sk.

Žilina
EXHIBITION: Boris Sirka - Some Time Ago – This Slovak artist has developed his creative style and in this exhibition he re-paints his own previous works, space objects and installations, giving them a new dimension and opening space for imagination.
Open: Mon-Fri 15:00-18:00 until May 18; Plusmínusnula Gallery, Mydlárska 1. Admission: free. More info: www.stanica.sk.

Košice
FILM MUSIC: Hudba amerických filmov / The Music of American Movies – On Mothers’ Day, the State Philharmonic Košice organises a concert conducted by David Hernando Rico that revives US film music, from Pirates of the Caribbean and Jaws, through Star Wars, to Scent of a Woman and Schindler’s List.
Starts: May 10, 19:00; Hou-se of Art, Moyzesova 66. Admission: €5-€7. Tel: 055/6220 -763; www.sfk.sk.