IMMIGRANTS from more than 100 countries brought their cuisine, their music and their own traditions to Israel, says Alexander Ben-Zvi, the Israeli ambassador to Slovakia, explaining why he cannot pick a single ‘typical’ Israeli dish.

Related: Israeli cuisine I Appetizer I Main dish I Other cuisines 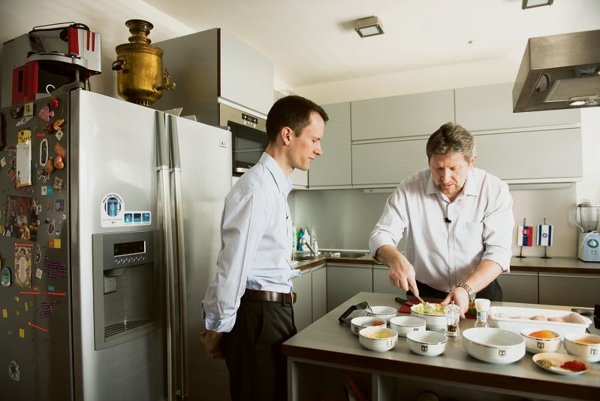 The Israeli ambassador explained that he picked two dishes that anyone can easily prepare, since the ingredients are available locally, the preparation is rather uncomplicated and Slovaks can use their favourite beer, even tasting it during the dish’s preparation.

To illustrate the rich variety of Israeli cuisine, Ben-Zvi lists hummus and falafel as being representative of the Middle East; stuffed fish, which is typical of central European Jewish cuisine; horse-radish, which is commonly used in Slovakia; and Ukrainian varenyky, which are stuffed dumplings.

Nevertheless, for Ben-Zvi, who arrived in Israel as a teenager, his first experience with Israeli cuisine was quite a departure from the food he had previously been accustomed to.

“I had never tasted Middle-Eastern food, with all the spices, before,” said Ben-Zvi, a passionate cook and a former journalist, adding that today he could compete in the preparation of many of these foods himself. “I can cook hummus: I can compete with anyone on even terms.”

Ben-Zvi left no doubt in the minds of his guests that he had stuffed green avocados, a very typical product of Israel, many times before, explaining that it “is a very healthy starter”, even for vegetarians. As for the chicken in orange-beer marinade, Ben-Zvi, who used Slovak beer for the preparation, says that it can be served on any occasion, be it a family reunion or a casual meal with some guests who have dropped in.

Ben-Zvi explains, however, that Israel has special dishes for holidays, such as Hanukkah, the Festival of Lights, “when everything is connected with oil because it’s a holiday of lamps, oil and temple, and we do special dishes using oil”. Special meals are also prepared for Passover, a holiday during which “we don’t eat bread or any products connected to flour and yeast”.

When it comes to Slovak food, Ben-Zvi admits that he is not a huge fan of bryndzové halušky, explaining that it is not the dumplings that he minds, but rather the milk products. If halušky were served with minced meat, however, the ambassador says he would definitely try it.

Slovenský Grob, which is famed for its numerous restaurants offering Slovakia’s traditional goose feast, is nevertheless on the list of Ben-Zvi’s favourite Slovak culinary experiences: “The Slovak way of doing the goose liver was a kind of revelation for me. I like everything that comes with the feast, including the lokše”.

When asked about the meals he likes to cook, Ben-Zvi says he prefers to prepare food from Israel and the region encompassing its neighbours. Yet he also mentions Shakshouka, a dish made of peppers, tomatoes, onions and eggs, which originated from the northern part of Africa, and which Ben-Zvi says makes the perfect breakfast.