TEACHERS returned to the streets of Bratislava for a day in early May to protest what they say is the alarming situation in Slovakia’s school system, something which they argue could be resolved by a consistent increase in government spending. However, not all teachers believe that such protests are the best way to bring about change. 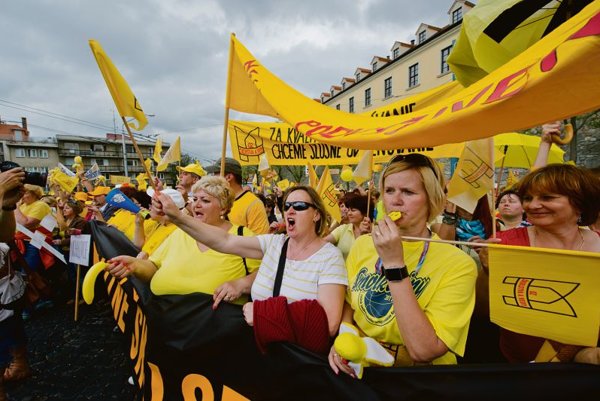 TEACHERS returned to the streets of Bratislava for a day in early May to protest what they say is the alarming situation in Slovakia’s school system, something which they argue could be resolved by a consistent increase in government spending. However, not all teachers believe that such protests are the best way to bring about change.

A group of teachers and their supporters, estimated to have numbered around 1,000, gathered in front of parliament to protest on May 7. The gathering started in front of the Government Office, with hundreds of teachers dressed in yellow T-shirts or holding yellow banners carrying slogans like “We don’t want undernourished schools”. The protest was the first big event of its kind organised by the main teachers’ and education workers’ union, the School Union, since its strike at the end of 2012. That strike was later suspended – a suspension that remains in force.

The School Union is calling on the government to start improvements in the education sector by increasing the amount of money it devotes to it during the current electoral term, i.e. up to 2016. The union is demanding that €140 million per year be spent on regional education and a further €60 million on universities.

“Education must be not only the political, but also the financial priority of the government,” School Union head Pavel Ondek told the crowd in front of parliament, as quoted by the SITA newswire.
Teachers highlighted what they said were their low salaries, but also drew attention to the dilapidated condition of many school buildings around the country.

Teachers who were not able to participate in the Bratislava gathering were encouraged to interrupt their classes while it was going on and discuss the state of education with their students. As a symbol of their support for the protest they wore yellow ribbons.

However, not all teachers agreed with the School Union’s tactics.

The New School Union, which emerged as an alternative organisation for teachers who were dissatisfied with the established School Union, said the May 7 protest was unlikely to result in any changes in Slovak schools.

“We had a big protest gathering of employees in education in September 2011 and nothing of importance has changed since,” the New School Union’s board wrote in a statement.

The New School Union suggested that it might soon come up with other, “more aggressive” forms of protest.

Ondek, from the School Union, would not rule out a return to strikes if the government did not accept the teachers’ demands, the Sme daily reported.

The opposition says it supports the teachers’ unions’ demands for an increase in the flow of money into the education system.

Opposition MPs voiced their support for teachers during a session of the parliamentary committee for education, which debated a report on the state of education authored by the Education Ministry, led by Minister Dušan Čaplovič, at the same time the protest was going on outside parliament.

Despite strong criticism of the report by opposition MPs, the committee passed it and recommended that parliament acknowledge it and oblige the minister to submit the results of a public discussion on it by the end of September 2013.

The key issue is for the government “to anchor concrete commitments by the end of its term,” said Slovak Democratic and Christian Union (SDKÚ) MP Miroslav Beblavý, as quoted by the SITA newswire, adding that otherwise the report would be just a scrap of paper.

Opposition MPs criticised the cabinet for not committing itself to specific sums of money to be directed to the school system over the next few years, but also for increasing local authorities’ power over schools, as the ministry proposes in the report.

The opposition also tried to get the committee to stop Čaplovič from proceeding with a project worth €25 million, entitled the National System of Qualifications, which is expected to be financed prevailingly from EU structural funds. The governing Smer party MPs on the committee blocked the move, but agreed to oblige the minister to report on measures he is enacting to use money more effectively in the area of national projects, by June 30.

The disputed project is designed to prepare a catalogue of skills and knowledge that would define the qualifications of workers for specific jobs. According to Čaplovič, Slovakia is the only EU member state not to have such a catalogue.