Life and times of Kapucínska

THE CAPUCHIN monastery and accompanying church in Bratislava arose gradually on its present site during the 18th century. 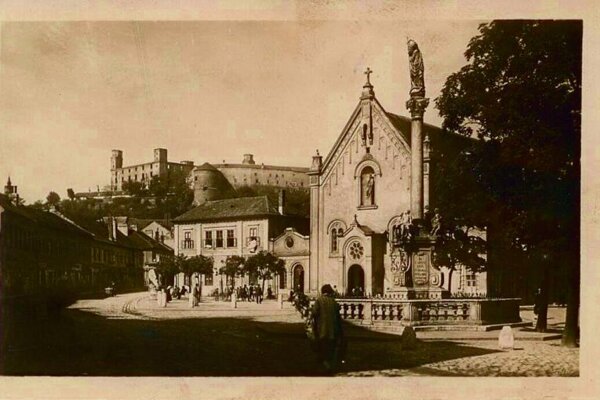 THE CAPUCHIN monastery and accompanying church in Bratislava arose gradually on its present site during the 18th century.

The original construction was directed by Capuchin Ján Damascin of Wiener Neustadt. Under his supervision, a simple and effective complex was built.

But there was a problem. The original structures were erected on marshy soil and began to sink. This resulted in parts of the church having to be torn down. This crisis was solved by a military engineer, Felice Donato Allio from Vienna.

In 1736-37, he stabilised the buildings and finished the church with the aid of Capuchin monk and builder Berthold.

In this photo Kapucínska ulica / Capuchin Street winds in front of the church. This road was once the main link between the town of Bratislava and the castle. After the walls were torn down a row of houses was built in what was once a moat. These houses can be seen on the left side of the picture.

At one time small shops lined the street and a bustling centre of commerce emerged.

Capuchin Street was partially demolished during the construction of the New/SNP Bridge so only a small part remains. In this postcard, dating back to World War II, we can admire the scene in its full elegance.