THE FIGHT by citizens of a small Slovak town to close a waste dump developed close to their homes, which has now dragged on for more than 10 years, might finally have a happy ending for anti-dump activists. The campaigners from Pezinok, near Bratislava, say that a recent Supreme Court decision means the site’s owner no longer has a valid permit to use it as a landfill. They also say that the case has a wider societal significance, since it means that the public must now have access to urban planning decisions that affect the establishment of sites with significant environmental effects. 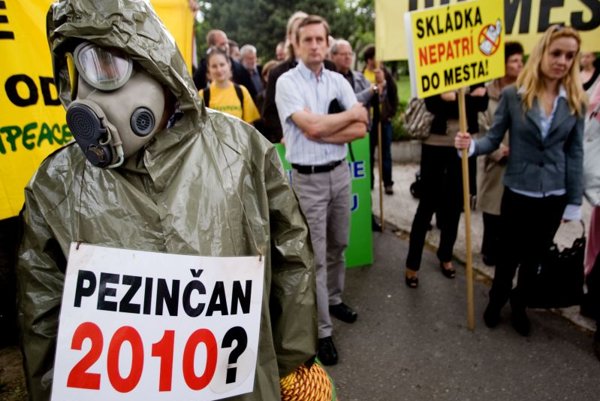 One of the protests held against the landfill. (Source: Sme)
Font size:A-|A+

THE FIGHT by citizens of a small Slovak town to close a waste dump developed close to their homes, which has now dragged on for more than 10 years, might finally have a happy ending for anti-dump activists. The campaigners from Pezinok, near Bratislava, say that a recent Supreme Court decision means the site’s owner no longer has a valid permit to use it as a landfill. They also say that the case has a wider societal significance, since it means that the public must now have access to urban planning decisions that affect the establishment of sites with significant environmental effects.

The appeal senate of the Supreme Court on May 14 overturned an earlier decision by a regional court, which in December 2008 dismissed a complaint by anti-dump activists and the town of Pezinok against the decision of the Slovak Environmental Inspectorate (SIŽP) to issue a permit allowing construction of the controversial landfill, the SITA newswire reported.

“The verdict of the Supreme Court has a great significance for us, because it has cancelled the permit for the landfill, thanks to which it will not be possible to operate it,” Zuzana Čaputová, a lawyer cooperating with Via Iuris, a legal watchdog, told The Slovak Spectator. She added that, at the same time, the issue was being returned to the SIŽP for further proceeding, as suggested by the law.

The court’s decision thus returns the case to SIŽP bodies, while the citizens concerned, specifically the residents of Pezinok, will have to be given the opportunity to actively participate in the process.

“Since procedural steps were not observed, which would evoke entitled expectation of the public that its possibility to join the proceeding and raise its objections was fulfilled, so it is necessary to cancel the contested decision”, Supreme Court judge Miroslav Gavalec commented in his verdict, as quoted by the Sme daily in its May 15 issue.

After the most recent verdict, Ekologická Skládka, represented by Ján Man Jr, said it remains interested in re-launching operation of the waste dump.

“The landfill is built and the waste is there, thus the sole logical solution for me is to continue operating the landfill,” Man Jr said, as quoted by SITA, adding that the first-instance decision of the Regional Environmental Inspectorate (IŽP) is still valid and that the SIŽP must now decide whether to cancel the permit or uphold it.

In September 2002, Ekologická Skládka, at that time run by Ján Man Sr, Man Jr’s father, requested a land use permit to build a new landfill but the municipality of Pezinok the same year effectively blocked it by adopting a new master plan from which the landfill was removed.

In 2006 the Regional Construction Office in Bratislava (KSÚ) adopted an urban planning decision concerning the location of a waste landfill. At that time the office was led by Man Jr, who had been nominated by Smer, the party which is now in government nationally. Based on the urban planning decision, the first-instance body, the IŽP in Bratislava, granted the landfill environmental approval but told the citizens of Pezinok that it would not publish the KSÚ decision, describing it as a trade secret and thus preventing them from participating effectively in the licensing procedure. Despite massive protests by locals in August 2008, the SIŽP turned down the activists’ appeals and approved construction of the new landfill, according to a chronology of events complied by Via Iuris.

Pezinok locals sued the SIŽP for approving the landfill without giving them the opportunity to participate in the process. The locals expressed concern about health issues linked to the operation of the landfill, since there is already one site close to their dwellings, and the new one was to be located less than 300 metres from the nearest houses. They pointed to the ban on the landfill in the master plan of the town as well as what they said is a higher rate of cancer in the town compared to the Slovak average, according to SITA.

When asked about the significance of the ruling for the wider public, Čaputová said that in order to respond properly she would have to wait for the written verdict, “however, from what has been said in the brief reasoning during its announcement, it will concern the effectiveness of the public’s participation in licensing procedures”.

“It is a very timely issue for different proceedings with the participation of the public in Slovakia,” Čaputová told The Slovak Spectator.

As for the impact that the court decision will have on further developments concerning the landfill, Čaputová said she hopes that in future proceedings at environmental inspectorates the public will be assured real and effective participation; that documents will not be concealed from the public, and that its opinions will be taken into consideration, with the deciding body considering such objections.

“This will, however, happen only if the inspectorate[s] proceeds in line with the law and respects the decision of the Supreme Court,” Čaputová said. “I hope that in a fair and legal proceeding we will be able to successfully apply our objection about the conflict between the landfill with the master plan and definitively prevent its operation.”

Mayor of Pezinok Oliver Solga commented that the town has to analyse the verdict but “in any case, it is a step in the right direction”.

Before delivering its decision, the Supreme Court turned to the European Court of Justice for clarifications. Among the important questions that were posed was that of how far the public should be involved in decisions that have a major environmental impact, and what duties state licensing and administrative authorities have towards citizens. The European Court of Justice responded earlier this year to five questions posed by Gavalec, who approached it in order to determine how European law affects the rights of the public in this and similar cases.

The European Court of Justice ruled, according to an official press release, that the public must have access to urban planning decisions concerning the establishment of installations that have significant effects on the environment, and that protection of trade secrets cannot be invoked as a reason for refusing such access.

“Under the Aarhus Convention, when a decision-making procedure concerning the environment is initiated, the public concerned must be able to participate in it from its beginning, that is to say when all options are still open and effective public participation can take place,” the January press release stated.

According to the court, the public must, as a rule, be able to have access, free of charge, to all information relevant to the decision-making procedure and be able to challenge the legality of any decision resulting from that procedure.

In its judgment, the court noted, in reference to a Slovak Constitutional Court attempt to block the Slovak Supreme Court from turning to Europe for guidance, that “a national procedural rule cannot call into question the discretion of national courts to submit a request to the [European] Court of Justice for a preliminary ruling in cases where they have doubts as to the interpretation of EU law”.

“There is a large probability that, since the appeal body admits that the failure to publish the territorial decision was a mistake, that it would be cancelled,” said Ľubomír Fogaš, a lawyer for the SIŽP, as quoted by SITA.

The citizens of Pezinok assert that the second-instance body should have cancelled the decision of the first-instance body instead of trying to rectify its shortcomings. They argue that the law does not make it possible to consider objections filed after the verbal first-instance proceeding, and that they could have submitted their arguments only at the very beginning, when they did not even know that there was an application for the construction of the landfill, SITA reported.

Read also: The history of landfills in Pezinok