SUSPICIONS of large-scale embezzlement of public funds in the country’s military intelligence agency during the first government of Robert Fico (2006-2010) have sparked a massive blame game between the former and current management of the Defence Ministry. Since the Sme daily broke the story on an anonymous 134-page file leaked from the military intelligence agencies on May 16, its alleged author emerged offering to reconstruct the file, once his oath of confidentiality is lifted. The original file was shredded when the term of the government of Iveta Radičová ended. 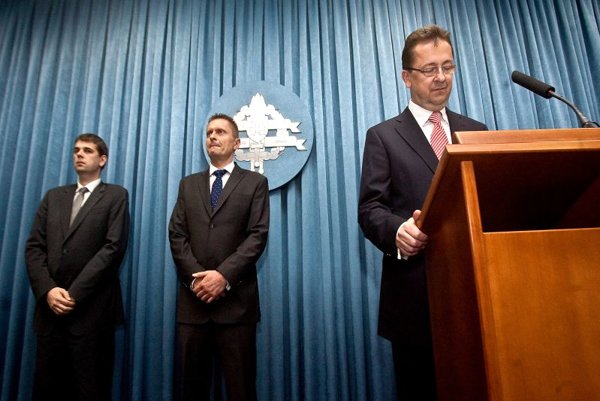 SUSPICIONS of large-scale embezzlement of public funds in the country’s military intelligence agency during the first government of Robert Fico (2006-2010) have sparked a massive blame game between the former and current management of the Defence Ministry. Since the Sme daily broke the story on an anonymous 134-page file leaked from the military intelligence agencies on May 16, its alleged author emerged offering to reconstruct the file, once his oath of confidentiality is lifted. The original file was shredded when the term of the government of Iveta Radičová ended.

Claims and counter-claims have flown back and forth between former defence minister Ľubomír Galko, who was sacked in late 2011 over a scandal involving the Military Defence Intelligence (VOS) counter-intelligence agency wiretapping journalists, and his successor Martin Glváč, who later appointed one of the main suspects in the alleged embezzlement scandal to lead the merged Military Intelligence (VS) service.

The file on the investigation of employees at the former Military Intelligence Service (VSS), the authenticity of which has been neither confirmed nor denied, first emerged when the Defence Ministry was led by Galko, who claims that Glváč is responsible for halting the investigation, according to Sme.

Though the report was shredded, Galko, now a deputy for the opposition Freedom and Solidarity (SaS), assumes that a considerable part of the document is still with the VSS. This claim has been confirmed by the former deputy of the head of VSS, Vladimír Suchodolinský, who said that last year he offered to reconstruct the original report, based on the documents available in the VSS, for the VSS boss, but received no response, the SITA newswire reported.

Though suspicions have been mounting over the past two weeks, heads have yet to roll, with Prime Minister Robert Fico standing firmly behind his defence minister, suggesting that “not even a wild boar” could figure out the case based on media reports, and that he would wait for the results of an investigation before taking any steps.

“I think the minister has nothing to do with this case because he did not operate as defence minister in the past and I naturally fully trust him,” Fico said in response to questions by journalists about whether he trusts Glváč, SITA reported.

Sme has handed the report over to the special prosecutor and parliament. The Office of the Special Prosecutor is now looking into the report, which contains information aboutalleged fraud related to 15 expensive residential properties in Bratislava, as well as cars, which ended up in the ownership of VSS officers and their relatives, according to Sme.

Both of the then directors of the two military intelligence agencies – Juraj Šebo of the VSS and Ľubomír Skuhra of the VOS counter-intelligence agency – allegedly knew about the transactions. The VSS and the VOS have since been merged and the new organisation is led by Skuhra.

Skuhra responded that the possible leak of the documents from the military service might bring some risk and result in damage affecting the “lives and health of the people who deal with intelligence services”, as reported by SITA. He also denied any misuse of public funds by the military intelligence agencies.

Both men returned to government service after Smer took office in spring 2012. While Skuhra now leads the merged VS, Šebo serves as military attaché to Slovakia’s embassy to China, Sme wrote.

Glváč on May 16 dismissed the story as only “a media game” and he washed his hands of the report, saying that the current management of the ministry has nothing to do with it, adding that he saw no reason to sack Skuhra at that point. A couple of days later in an interview with Sme, Glváč said that it is also possible that “the buildings which were to have been stolen never left the ownership of the state”.

The ruling Smer, including Glváč, have been blaming Galko for what they called his failure to take action, based on the information on embezzlement which he had at his disposal. Yet Galko claims that he did, in fact, order an investigation into the case.

“We also have to ask Mr Galko why he did not say a word when, many times after merging the intelligence services, I suggested that either Skuhra or [Robert] Tibenský would be its boss,” Glváč told Sme in an interview printed on May 20. “If he had known about it, why did he not say that there were suspicions against Skuhra?”

Smer deputies on the parliamentary committee that oversees the operation of military intelligence on May 22 even called on Galko to give up his seat in parliament. Tibor Lebocký of Smer told the press that Galko had had information about serious criminal activities and it was his civil duty to report these to prosecution bodies, SITA reported.

Then, to support their claims, the Smer MPs attempted to play a video recording which featured Suchodolinský saying “we twice informed Galko after we learned about certain suspicions”, but due to technical problems, the same section was played repeatedly eight times. Galko then claimed that the Smer deputies simply edited out the part where Suchodolinský said that Galko issued an order to investigate the issue.

Galko has meanwhile provided journalists with two documents to support his claim that Glváč must have known more about the suspicions than he has admitted. The first document is a disciplinary order issued by Radičová, who temporarily served as defence minister as well as prime minister after firing Galko, Sme reported. Radičová reproached then VSS boss Roman Mikulec for shredding the file instead of handing it over to then interior minister Daniel Lipšic, as she had instructed. According to Sme, the document with Radičová’s signature suggests that the file Sme obtained came from an authentic internal investigation. Yet, Glváč only said that he knew there were suspicions, asking “why has someone shredded it?”

Nevertheless, the second document that Galko presented to the press is an alleged order by Glváč to cancel Radičová’s order, which states that the shredded document pertained to activities of the VSS and VOS. Glváč told Sme that he returned the disciplinary order for re-investigation, arguing that it pertained only to the shredding of the file. Glváč moreover appointed Skuhra to lead the merged VS, Sme wrote.

Glváč claimed that he first saw the file on May 20 and that he only saw the “accompanying letter, which should have been delivered to then interior minister” Lipšic. However, according to Sme, at the press conference he accused Mikulec’s family firm of unjustified business with the ministry worth €2.9 million, but remained tight-lipped about the details.

“I can honestly declare that I am the author of the original shredded report on the suspicions of embezzlement in military intelligence,” Suchodolinský said on May 21, as quoted by Sme.

The file originated from the time that Milkulec led the VSS, and was shredded on his order during the tenure of the Radičová government.

Suchodolinský also offered the chairman of the parliamentary committee overseeing military intelligence, former defence minister Martin Fedor, to confirm whether the report obtained by Sme was identical to the report he worked on, according to SITA.

He has requested that the defence minister lift his oath of confidentiality so that he can discuss the matter as soon as possible.

Suchodolinský said that his report discussed the embezzlement and that when he left the army, in December 2012, there was still written evidence at the VS and the file went to his successor.

According to Galko, the VOS investigated alleged embezzlement of property between 2006 and 2010, and suspicion fell on VOS and VSS officials working for the ministry when it was managed by Smer nominee Jaroslav Baška.

On May 21, the Defence Ministry called on “everyone with information about the case of alleged embezzlement at the military intelligence” to provide it to the Office of the Special Prosecutor at the General Prosecutor’s Office without delay, SITA reported.

According to the ministry, neither the media nor the oversight committee, and most of all no agents of the intelligence services, can be “judges in this case”.

Former defence minister Baška, who served in the first government of Fico, said that he never had information about illicit management of public funds within the VSS, SITA reported on May 16.

“The first time I learned about it [was] from the media, now,” Baška said.

Baška, for example, argued that Šebo, who became VSS director in 2007, was appointed by his predecessor František Kašický, another Smer nominee. However, Sme noted that Šebo served most of his tenure under Baška.

According to Sme, the General Prosecutor’s Office already investigated the embezzlement once before when, at the behest of Radičová, Tibenský sent the document detailing suspicious activities. The document however wound up being part of another investigation, which is not directly linked with the embezzlement.

Meanwhile, Sme reported on May 23 that a prosecutor at the General Prosecutor’s Office, Jaroslav Kozolka, was an agent of the communist-era military counter-intelligence service, citing information from the archives of the Czech Institute for the Study of Totalitarian Regimes. Kozolka himself now deals with sensitive cases involving military intelligence but also with civil cases like that of Hedviga Žáková-Malinová, an ethnic Hungarian who reported that she was physically assaulted for speaking Hungarian in public on a mobile phone. He is reported to have reviewed the case of alleged corruption at the VSS, but to have taken no action, according to Sme.

Kozolka has received National Security Authority (NBÚ) security clearance, Sme reported, despite the law clearly stating that former employees of repressive arms of the communist state should not be granted such privileges. It is a mystery how Kozolka obtained security clearance, given his past, Sme wrote, adding that the NBÚ is prohibited by law from commenting on the clearances it grants.