Fico: We will elect new prosecutor

CONSTITUTIONAL Court Justice Peter Brňák, who was earlier this year barred from ruling on a motion submitted by Jozef Čentéš, after Čentéš alleged that Brňák might potentially be biased against him, will nevertheless now decide on the fate of Slovakia’s general-prosecutor-elect. 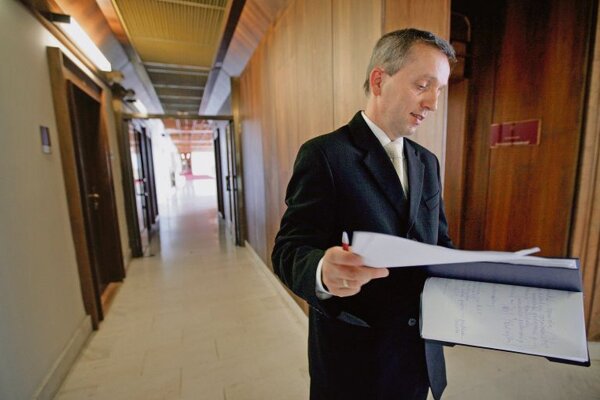 CONSTITUTIONAL Court Justice Peter Brňák, who was earlier this year barred from ruling on a motion submitted by Jozef Čentéš, after Čentéš alleged that Brňák might potentially be biased against him, will nevertheless now decide on the fate of Slovakia’s general-prosecutor-elect.

Brňák was given the case file on May 22, two days after President Ivan Gašparovič signed into a law a change to the court’s operating rules which allows justices barred on grounds of potential bias to remain sitting in judgement.

This development, however, may turn out to be moot after Prime Minister Robert Fico unexpectedly announced on May 21 that he was planning to hold a new vote in parliament to select a new general prosecutor, a move which would effectively ignore Čentéš’ election in June 2011, and pre-empt the outcome of his current case before the Constitutional Court.

Gašparovič has consistently blocked Čentéš’ appointment ever since his election by the 2010-2012 parliament. According to Fico, there are no legal obstacles standing in the way of a new election.

“No obstacle exists and it never has,” Fico said, as quoted by the SITA newswire. “From the very beginning, since the rise of this government, we could have proceeded to the election of general prosecutor in parliament, but we wanted to respect that there were different complaints submitted.”

Only a couple of days earlier Fico, in response to a statement by Gašparovič that he would never appoint Čentéš to the post of general prosecutor, had suggested that in practice this meant that Slovakia would not have a general prosecutor before June 2014, when a new president is due to take office, according to the Sme daily.

The Constitutional Court meanwhile accepted a complaint filed by a group of opposition deputies challenging the revision to the law on the operation of the Constitutional Court. The law change was prepared by the ruling Smer party, ostensibly to resolve the deadlock in the Constitutional Court, which was a result of both sides in the Čentéš-Gašparovič case challenging all but one of the court’s thirteen judges on grounds of alleged bias. The opposition deputies are also calling for a preliminary injunction to halt the validity of the new law until the court decides on the merits of the case, SITA reported.

The amendment, which foresees the implementation of the doctrine of necessity based on the so-called Bangalore principles of judicial conduct, makes it possible for judges who have previously been excluded from deciding on a given matter to pass judgment if inactivity on the part of the court would lead to a denial of access to fair judicial treatment. It is on this basis that the Čentéš case is returning to the original senate composed of Justices Marianna Mochnáčová, Milan Ľalík and Brňák. This is despite Brňák and Ľalík having both been excluded from ruling on the case based on objections to them by Čentéš.

Former justice minister Lucia Žitňanská argued that the law change, which Fico’s Smer party pushed through in a fast-tracked proceeding in parliament on April 30, is an abuse of the law for political purposes, SITA reported.

According to Žitňanská, a member of the Slovak Democratic and Christian Union (SDKÚ), the opposition considers the revision an unjustified intervention by the executive into a proceeding at the Constitutional Court because it retroactively changes a valid decision made by the court to exclude specific judges and directly defines the senate which will decide on the Čentéš case.

When announcing that the government had decided to hold a new election to choose an alternative general prosecutor, Fico said that Čentéš would not be a candidate and that there had never been any obstacle to electing a new prosecutor. Fico also warned journalists that they were making a mistake by describing Čentéš as the lawfully elected candidate for the post, SITA reported.

Fico said the government wanted to solve the problem of leadership at the Office of the General Prosecutor as soon as possible, suggesting that the current management was “improvised”. When justifying his decision to push the Constitutional Court rule changes through parliament in less than one day in late April, Fico had described the situation at the prosecutor’s office as “unbearable”, citing “secret information” on developments there that he claimed he could not disclose.

Meanwhile, Čentéš has said that he will consider turning to the European Court of Human Rights if his right to a fair court hearing and impartial judgement are not respected, SITA reported.

A brief history of the case

The term of the last general prosecutor, Dobroslav Trnka, expired in February 2011, but it took until June of that year for parliament to elect Čentéš as his replacement. However, Gašparovič then refused to appoint him, despite the Constitutional Court ruling in October 2011 that his election had been constitutional. Gašparovič faced extensive criticism from the opposition and political analysts for failing to appoint Čentéš, and then for presenting what they said were insufficient reasons for formally rejecting him. Čentéš on November 7, 2011 filed a complaint against the president’s lack of action with regard to his appointment. The Constitutional Court has not yet decided on that case.

In a separate ruling delivered on October 24, 2012, the Constitutional Court said that the president must “deal with” a proposal of parliament to appoint a new general prosecutor based on the 150th article of the Slovak constitution, and that if the candidate was elected in accordance with the law the president must either appoint him/her “within an appropriate time-frame” or inform parliament of his refusal to do so. According to the Constitutional Court, the president can refuse to appoint a candidate only if the candidate does not meet the legal requirements for the office or there are “grave reasons” that cast doubt on the candidate’s ability to perform the job in a way that does not harm the authority of the institution of general prosecutor. More than two months after this decision, Gašparovič announced that he would not appoint Čentéš.

The ‘objection war’ began in early January 2013, when Čentéš filed an objection to Gašparovič’s formal refusal to appoint him. This was to be considered by a senate composed of Justices Marianna Mochnáčová, Milan Ľalík and Peter Brňák. Čentéš immediately filed an objection against Brňák and Ľalík, which was accepted by a panel composed of Justices Lajos Mészáros, Sergej Kohut and Juraj Horváth. As a result, Ľalík and Brňák were replaced by Ján Luby and Ladislav Orosz. Gašparovič, however, submitted an objection to Luby and Orosz – and then to Mészáros, Kohut and Horváth, who were to hear his objection. The Constitutional Court then established a third panel to judge the objection against the second panel, composed of Justices Rudolf Tkáčik, Ján Auxt and Ľubomír Dobrík. Čentéš submitted an objection against Auxt and Dobrík at the end of February, and this objection went to a panel consisting of Tkáčik, Ľudmila Gajdošíková and Ivetta Macejková. The president then objected to Tkáčik and Gajdošíková. Čentéš subsequently submitted an objection to Macejková, leaving Mochnáčová as the only judge of the court not subject to an objection. Ľalík and Brňák are the only judges to have been formally excluded so far, but their senate will, under the new rules, nonetheless hear the case.