LAST year a Slovak court issued an important verdict confirming that Roma children at a small elementary school had been segregated. Even though the ruling of the Prešov Regional Court, concerning a school in Šarišské Michaľany, brought about some positive changes, including a definition of segregation and acknowledgement that such practices violate the country’s antidiscrimination law, Amnesty International (AI) warns that there are still some schools in Slovakia where Roma children are separated from their non-Roma peers. 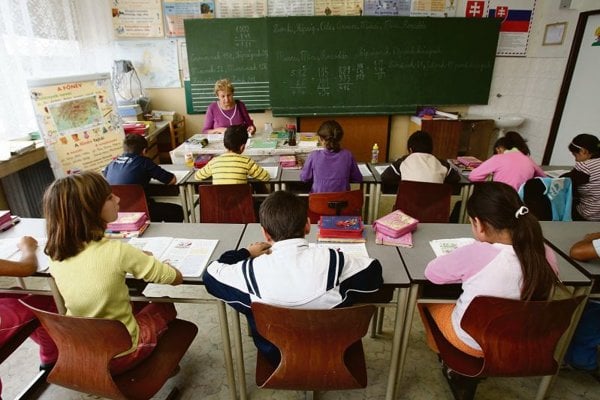 LAST year a Slovak court issued an important verdict confirming that Roma children at a small elementary school had been segregated. Even though the ruling of the Prešov Regional Court, concerning a school in Šarišské Michaľany, brought about some positive changes, including a definition of segregation and acknowledgement that such practices violate the country’s antidiscrimination law, Amnesty International (AI) warns that there are still some schools in Slovakia where Roma children are separated from their non-Roma peers.

Discrimination against Roma in schools was among AI’s biggest criticisms of Slovakia in its Amnesty International Report 2013, published on May 23, which documents the state of human rights and presents a global overview of human rights violations and abuses in 159 countries all over the world. AI delegates visited Slovakia in March, June and November 2012.

The report also highlights other areas in which Slovakia violates human rights, like forced evictions of Roma families, poor access of Roma to health care and forced sterilisation of Roma women.

Among other areas of concern is Slovakia’s forcible return of people to countries where they risk torture or other forms of inhumane treatment, like the extradition of Mustafa Labsi, an alleged terrorist who was extradited to Algeria in 2010.

The European Court of Human Rights (ECHR) ruled in May 2012 that this decision had violated his rights, since it disregarded an interim measure previously issued by the court.

The AI report also mentions the abolition of the office of the deputy prime minister for human rights in September 2012, whose agenda was transferred to the Foreign Affairs and Interior Ministries, and the establishment of the committee for the rights of lesbian, gay, bisexual and transgender (LGBT) people within the Council for Human Rights in October 2012, whose role is to monitor the compliance of Slovak authorities with international human rights treaties.

The government has made little progress in eliminating discrimination against Roma, according to the AI report. There are three main areas in which the state has failed to combat discrimination: education, housing and health care.

Even though the ruling of the Prešov Regional Court provided state authorities with a tool to fight segregation in schools, the Education Ministry has so far not introduced a strategy to make schools more integrated, spokesperson for Amnesty International Slovensko (AIS) Jana Vargovčíková said at a press conference held on May 22.

“The situation at the elementary school in Levoča, which we have been monitoring for a long time, has improved a bit and some Roma children have been moved into mixed classes, but there are still segregated classrooms at the school,” Vargovčíková said.

The AI report also criticises Slovakia for numerous occurrences all over the country of Roma being forcibly evicted from their homes without being given access to basic services, including alternative accommodation. AI delegates reported cases in Vrútky, Žilina Region, Prešov and Košice. Vargovčíková said that similar mechanisms of discrimination can also be found in other countries around the world.

With regard to access to health care, Vargovčíková cited problems faced by Roma living in settlements outside towns and villages when they have to go to the hospital. According to her, they face “worse treatment than non-Roma citizens”.

The AI report also focuses on forced sterilisation of Roma women. The ECHR has so far issued three verdicts which confirmed that illegal sterilisation of young Roma women occurred without their informed consent. This amounted to “the violation of their right not to be subjected to inhumane or degrading treatment, as well as a violation of their right to respect for private and family life”, the report reads.

Vargovčíková said that forced sterilisation should be “absolutely and immediately stopped and removed from Slovak hospitals”. Moreover, the AIS requires the state to accept responsibility for forced sterilisations, as well as to introduce a compensation mechanism for women who had this procedure done to them, the spokesperson added.

“The basic requirement is to stop any discrimination, whether it is access to education, housing or health care in Slovakia,” Vargovčíková told The Slovak Spectator.

Trade with weapons seen as problem

One of the big problems the world currently faces is the arms trade and the export of arms to countries that could violate basic human rights. Slovakia allows exports of military arms and equipment to several countries, including Algeria, Egypt, Cambodia, Kazakhstan and Uganda, all of which “use excessive force when suppressing protests” and in which “torture is a common practice”, according to AIS’s press release.

As in several other countries, Slovakia observes international agreements and also has its own legislation for authorising the export of military arms and equipment. Yet, unlike other EU member states, Slovak law does not define the criteria upon which requests to allow military exports are considered. This means that neither the applicants nor the public learns about all the reasons why a request is denied, Jana Dlhopolčeková, an expert on the control of exports of military materials, told the press conference.

The authors of the report state that weapons often have an easier time crossing borders than refugees or migrants. AI hopes that ratification of the Arms Trade Treaty in April 2013 will improve the control of the movement of weapons. Moreover, the agreement forbids the export of weapons to countries in which they might contribute to genocide and war crimes, as well as serious violations of human rights and international humanitarian law, AIS’s press release reads.