Vocational training in the spotlight

SLOVAKIA’S job market lacks skilled mechanics and technicians, according to businesses who claim that once the generation of workers in their fifties retires, there might not be enough qualified workers to replace them. The Education Ministry sees this as a major challenge, and promises to come up with a set of new measures that would make vocational training more attractive to students and encourage participation by businesses. 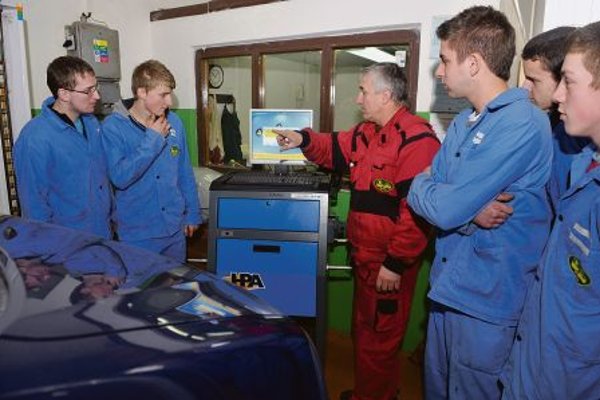 SLOVAKIA’S job market lacks skilled mechanics and technicians, according to businesses who claim that once the generation of workers in their fifties retires, there might not be enough qualified workers to replace them. The Education Ministry sees this as a major challenge, and promises to come up with a set of new measures that would make vocational training more attractive to students and encourage participation by businesses.

Over 42,000 pupils will leave Slovakia’s primary schools to continue their studies at secondary schools in the next school year, which begins in September 2013. They can select from among the country’s 245 gymnasiums and 468 professional schools (providing three- to five-year study programmes with or without the final state exam).

The Education Ministry under the current minister, Dušan Čaplovič, believes that more pupils leaving primary school should be interested in vocational training. Čaplovič made it clear from the beginning of his term that he was not going to give extensive support to gymnasiums or secondary schools that teach comprehensive curricula, or to prepare pupils for careers in humanities, medicine or technical university studies. One of his arguments against supporting gymnasiums was that there are too many university graduates majoring in humanities with slim chances of securing work on the labour market.

Vocational education receives special attention in the recent report on the state of education in Slovakia that Education Minister Dušan Čaplovič submitted and the cabinet of Prime Minister Robert Fico acknowledged on April 10, and which has prompted a wave of criticism directed at the minister. In the report, the minister claims vocational schools can only be effective if they are able to react to the changing needs of the labour market.

About 60,000 professionals leave vocational schools every year, but only about 6 percent of them find work in their field of study.

Employers should be able to provide so-called graduate profiles, which would list all the skills and practical experience that a graduate needs in order to be ready to work immediately, the ministry wrote in the report. Businesses should also cooperate with schools in designing study programmes.

A dual education system, with the “practical part of the vocational training and education taking place directly within the companies”, as the report reads, has meanwhile become one of Čaplovič’s mantras when discussing solutions for vocational education.

“Practical training provided directly from employers can increase the quality of practical preparation of pupils, mainly due to the fact that it will enable them to get to know the environment of their [future] workplace, and develop work habits in pupils necessary for their successful placement on the job market,” the report reads.

The dual system has existed in the country since before 1992, “and the companies easily calculated that it is more effective for them to prepare their pupil for the job rather than continuously cope with the problem of fluctuation and lack of labour force”, said Jaroslav Holeček, the president of the Association of Automotive Industry, in a televised debate on the TA3 news channel.

“There is nothing better than when the employer knows how much they need and when they participate in the preparation,” Holeček said.

Several experts however warn of excessively narrowing the specialisation of pupils in study programmes. The ministerial report also mentions this as a factor which could limit graduates’ chances of finding work.

“Sometimes this specialisation might even mean narrowing down to only one or two employers,” the ministry wrote.

Employers gathered in the Government’s Council for Vocational Education and Preparation have already introduced a programme that will test elements of dual education at 20 schools in seven industrial areas (including carmakers and ironworks) as of September 2013, the Pravda daily reported.

The project is one of the departure points for an amendment to the law on vocational education, which the ministry wants to submit in 2014. The legislation needs to stimulate employers, said the Education Ministry’s State Secretary Štefan Chudoba in an interview with the Trend weekly. This could be done by either giving the participating companies tax benefits, or by allowing the normal amount that schools receive for students to be used towards the companies, “to help [businesses] pay for part of the costs of vocational training,” Chudoba said.

Fostering ties between businesses and schools at all levels has long been at the centre of discussions among foreign businesses operating in Slovakia, too.

“Strong and systematic cooperation between vocational schools and companies - the so-called dual system - serves as a role model,” said Guido Glania, executive board member of the Slovak-German Chamber of Commerce, in an interview with The Slovak Spectator earlier this year, expressing his hope that the government will put forward specific projects in the near future.

Foreign investors have welcomed the changes pursued by the Education Ministry in relation to vocational schools so far, but expect much more.

“It is important that young people become genuinely interested in technical jobs and do not see them as a plan B,” Glania said, adding that more attractive secondary schools with clear career paths could help to achieve that. For instance, it would be useful to establish universities for applied sciences which are geared towards practical skills and knowledge, Glania suggested, explaining that these institutions can be a great way for skilled practitioners to improve their educational background and boost their careers.

“We are afraid that we haven’t seen many significant measures taken by the government in the education sector so far,” Jake Slegers, the executive director of American Chamber of Commerce, told The Slovak Spectator. “The businesses would like to see a specific mid- and long-term vision and strategy for Slovak education. There are several changes we would expect, among them making Slovak education an apolitical priority.”

All vocational schools should see some changes as early as September 2013, as they are supposed to start the next school year with new curricula, which will include more mathematics and professional subjects, while the curriculum is to retain only one compulsory foreign language.

Only schools focusing on economics, business, services and publishing can continue with two compulsory foreign languages in their curricula, according to the amended state curricula for vocational schools as reported by Pravda.

Additionally, schools will have more freedom in creating their study programmes, and they will have to pay more attention to vocational training.

“Now the volume of vocational education will increase and other available lessons might be used either for vocational or for general education, depending on what the school needs,” František Tomašovič, from the Association for the Development of Vocational Schooling, told Pravda.

In line with his plans to strengthen the position of vocational schools, Čaplovič’s ministry has sought not only incentives, but some restrictions too. As of September 2014, new rules for admissions to secondary schools should become effective, as stipulated in the amendment to the law on professional education passed by parliament in 2012.

Under the new rules, pupils must earn an average grade of 2 or better for the last three semesters of primary school in order to be eligible to enrol at gymnasiums. Students planning to enrol in professional secondary schools with final state exams will need to earn an average at least 2.75, on a Slovak scale where 1 is excellent and 5 is a failing grade. The opposition believes that the new rules for admission to secondary schools might be unconstitutional, and 31 MPs have already filed a motion to the Constitutional Court against the measure.

“This law made Slovakia the world's only country where the average grade on the one and only semester certificate might mean a lifelong ban from being admitted to a secondary education with a final state exam, and thus also a ban from university education or a job in the state service,” MP Miroslav Beblavý wrote in his statement on behalf of the 31 MPs.

The opposition MPs thus believe the law violates both the right to education and the ban on discrimination as guaranteed by the Slovak Constitution and international documents ratified by Slovakia.

Experts from non-governmental sector have opposed the rules too.

“I consider it a step back and a short-sighted decision that puts a large group of children at a disadvantage,” Ctibor Košťál, director of the Slovak Governance Institute (SGI) non-governmental think tank, told The Slovak Spectator.