WHILE over the past 10 to 15 years beekeepers have been reporting an alarming reduction in the number of bees and bee colonies, no single cause for the declining bee numbers has been identified, according to the European Food Safety Authority’s (EFSA) website. In its effort to reverse the trend, an appeal committee of the European Commission voted on April 29 to place a two-year moratorium on three types of pesticides that are believed to cause harm to bees. 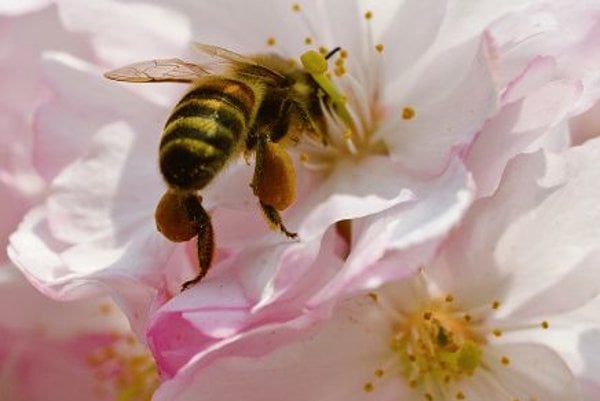 WHILE over the past 10 to 15 years beekeepers have been reporting an alarming reduction in the number of bees and bee colonies, no single cause for the declining bee numbers has been identified, according to the European Food Safety Authority’s (EFSA) website. In its effort to reverse the trend, an appeal committee of the European Commission voted on April 29 to place a two-year moratorium on three types of pesticides that are believed to cause harm to bees.

Slovak beekeepers welcomed the ban, while representatives of the Slovak Agriculture and Food Chamber (SPPK) and the non-governmental Slovak Crop Protection Association (SCPA), pointed to what they called a political decision overriding clear scientific reasoning.

Bees are critically important to the environment, sustaining biodiversity by providing essential pollination for a wide range of crops and wild plants. They contribute to human wealth and well-being directly through the production of honey and other food and feed supplies, according to the EFSA.

The restrictions, which will come into effect on December 1, 2013, were supported by 15 EU member states; eight member states voted against and four member states abstained during the appeal committee vote. Since no qualified majority was reached, procedurally, the responsibility on deciding whether to adopt the proposal now lies with the EC, which will in the coming weeks adopt a proposal, according to the EC website.

Slovakia voted against the proposals, demanding some sort of compromise, Peter Hajnala, spokesperson for the Agriculture Ministry, said, according to the Sme daily.

The proposal restricts the use of three neonicotinoids, namely clothianidin, imidacloprid and thiamethoxam, for seed treatment, soil application and foliar treatment on bee-attracting plants and cereals, according to the European Commission press release. The commission’s action is a response to the EFSA’s scientific report, which identified “high acute risks” for bees in terms of exposure to dust found in several crops, such as maize, cereals and sunflowers; to residue in pollen and nectar in crops like rapeseed and sunflower; and to guttation in maize, according to the EC.

“I pledge to do my utmost to ensure that our bees, which are so vital to our ecosystem and contribute over €22 billion annually to European agriculture, are protected,” Tonio Borg, the health and consumer commissioner, said in an EC press release.

However, in some cases the EFSA was unable to finalise the assessments due to shortcomings in the available data, Stanislav Nemec, spokesperson for the SPPK told The Slovak Spectator. Nemec referred to the US government’s latest report on the disappearance of honeybees, which downplays the role of the pesticides in colony collapse, citing instead parasitic mites, multiple viruses, bacteria, poor nutrition, genetics and habitat loss.

Considering the lack of data which could support the claim that products in clothianidin, imidacloprid and thiametoxam harm bees, the EC’s decision was hurried, SCPA Executive Director Jozef Kotleba told The Slovak Spectator.

“We [the SCPA] believe that neonicotinoids are not the cause of the mortality rate of bee colonies,” Kotleba said. “The plant protection industry has resolved to prove this statement in cooperation with all concerned sides, with the aim of reaching a common attitude and to look for a solution to the main threats to the bees’ health.”

Discussion over the reasons

However, Ľudovít Gál, the president of the Slovak Association of Beekeepers, says that pesticides are the main reason behind the disappearance of bee colonies, killing bees as well as weakening their colonies’ long-term viability, according to Sme. However, it is difficult to prove that use of pesticides causes bees’ deaths, he added, pointing to a lack of official statistics on the issue. Gál also added that there are alternatives for plant protection which do not harm bees.

The Deputy Head of the Institute of Apiculture of the Animal Production Research Centre, a state organisation, Tatiana Čermáková, agrees that pesticides harm bees, arguing that neonicotinoids belong to a class of insecticides that are created to control pests, and since bees are insects, it is therefore certain that they have a negative impact on bees, the RTVS public-service broadcaster reported.

On the other hand, many studies confirm that bees’ health is affected by a variety of factors, and among other things, Varroa and Nosema diseases are considered to be the main causes of death among bees, according to Kotleba.

During the process of approving agro-pesticides and plant protection products, the possible risks for bees are evaluated. A proposal of conditions under which such products should be used, in order to minimise the threat to bees, like application during times when bees do not fly or a ban on use when plants are in bloom, are also part of this process, Agriculture Ministry spokesperson Radka Kulaviaková told The Slovak Spectator.

“If a user of authorised products applies [these] assessed conditions of use, the risk for bees should be low, even with insecticides,” Kulaviaková said, adding however, that even plant protection products may affect the death rate of bees.

Agriculturists will have to respond to the EU restriction by using alternatives for banned pesticides, and even though the SPPK does not have the necessary data, there is the possibility that farmers will have to use a considerably higher amount of other protective products, resulting in higher spending on chemical protection for their plants, Nemec said.

A total ban of neonicotinoids would cause losses ranging €20 to €30 per hectare, Dionýz Korcsog from Chemstar Company, which provides treated seeds for corn, sunflower and rapeseed, told the Sme daily. He added that after the ban becomes effective, the number of bee deaths may actually increase, since farmers might start using other pesticides. Moreover, banned plant protection products smuggled in from China or India may enter the Slovak market, according to him.

There is no adequate alternative for some applications of restricted pesticides in agriculture and possible alternatives are not safer for bees’ health, Kulaviaková said.

One of the most significant impacts of climate change is a rise in sea levels due to thermal expansion and the melting of glaciers and ice sheets. There is alarming evidence that crucial tipping points, leading to irreversible changes in the major ecosystems and planetary climate system, may have already been reached, according to the United Nations Environment Programme (UNEP) website. From 1901 to 2000, the earth’s surface temperature increased by around 0.6 degrees Celsius. A rising sea level is consistent with global warming, and the sea level has risen since 1961 at an average rate of 1.8 millimetres per year, and between 1993 and 2003 it jumped to 3.1 millimetres per year, according to Climate Change 2007: Synthesis Report, conducted by the Intergovernmental Panel on Climate Change (IPCC), the international body for the assessment of climate change.

Observed decreases in snow and ice are also consistent with global warming. Satellite data since 1978 has shown that Arctic ice has shrunk on average by around 2.7 percent per decade.

From 1900 to 2005, precipitation increased significantly in the eastern areas of North and South America, northern Europe and northern and central Asia, but decreased in the Sahel, an eco-climatic zone in the north of Africa; the Mediterranean; southern Africa; and parts of southern Asia, the report says.

In Slovakia climate change could result in warmer temperatures and increased precipitation, which could boost plant growth in some regions, but turn other regions into dry zones. Problems with pests could also intensify, and Slovakia can expect a gradual pest infestation, particularly from the Balkan Peninsula, according to the final report of the Climatic Change and Adaptations project, conducted by the Slovak Hydrometeorological Institute (SHMÚ) in cooperation with the Ecological & Forest Research Agency (EFRA) and the Association for Economic Modelling, Forecasts and Analyses (EMPA) in 2011.

In addition, water flows in the southern part of Slovakia would decrease, and water supplies for both drinking and agriculture would decline, according to the report. Fauna that is more sensitive to climate change may also be in danger, and the country’s biodiversity would likely decrease. Global warming could also impact tourism in Slovakia: conditions for summer tourism activities would improve, but at the expense of conditions necessary for winter sports.