MORE than 120 Slovak institutions in more than 50 cities and towns took part in the ninth year of the Night of Museums and Galleries, which was part of the Europe-wide event, Nuit Europeénne des Museés, organised annually by the French Culture Ministry on the weekend that falls closest to May 18. 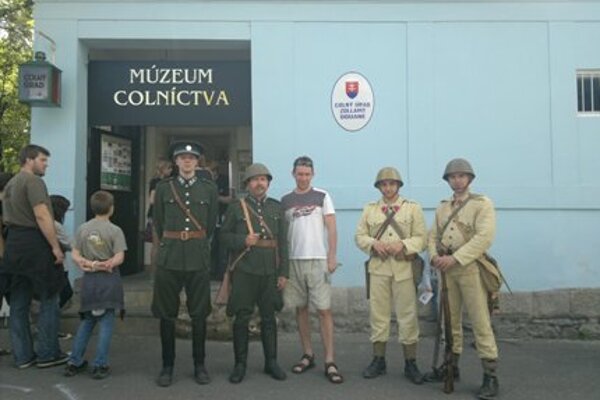 The staff at the Museum of Customs lures visitors. (Source: Courtesy of Múzeum colníctva)
Font size:A-|A+0

MORE than 120 Slovak institutions in more than 50 cities and towns took part in the ninth year of the Night of Museums and Galleries, which was part of the Europe-wide event, Nuit Europeénne des Museés, organised annually by the French Culture Ministry on the weekend that falls closest to May 18.

“The joint event is very important for museum and gallery employees, and its prestige, awareness and publicity are crucial in our [i.e. Slovak] conditions, when museums and culture are really on the margins of society,” Eva Ševčíková, a member of the Board of the Association of Museums in Slovakia, told the SITA newswire. She added that the purpose of the event was to give the institutions the opportunity to prepare something special for visitors; to allow access to objects, rooms and hidden niches not normally open to the public and to lure people who would not typically consider setting foot in a museum or gallery.

Bratislava’s Museum of Police on Gunduličova 2 is less accessible to the public, as it is usually open between 10:00 and 14:00 Tuesday through Friday - hours conducive mainly to school field trips. However, it opened its doors and expanded its hours on May 18, attracting many visitors, mostly families with children.

“We offer video-screenings, apart from the normal exhibits,” its director Zuzana Slameňová told The Slovak Spectator, adding that on the Wednesday prior to the Night of Museums, another event took place, called the Night of Literature, for which actress Szidi Tobias read aloud from a crime story.

This event typically features readings of books performed by famous personalities in special places, like art schools, cemeteries or, in this case, the police museum.

Another small museum – “we are the smallest in Slovakia”, its employee Ján Ščerbík told The Slovak Spectator – is the Customs Museum, located in the former toll house on the Staré Mesto side of the Old Bridge. The woman at the ticket office said they had about 500 visitors this year, thanks in part to the help of several handsome men in period uniforms on loan from the Czechoslovak Fortification Museum (which manages the bunkers and secret fortification system built in Petržalka to protect Czechoslovakia from Nazi Germany).

The staff of the Customs Museum, which is run by enthusiasts from the Association of History of Customs and Financial Administration, gave lectures on the history of customs offices until late in the evening - on the history of customs offices, from ancient Roman borders, through the Austro-Hungarian Empire, discussing, among other things, the famous Martinec customs law, created by Emil Martinec in 1927, which managed to survive both the turbulent period of the wartime Slovak state and the early years of the communist regime, without any amendments, until 1953.

The small building of the museum was originally built, like the bridge itself, in 1890, and was intended as a storage facility for the bridge’s maintenance tools, according to Ščerbík. The building served as a customs house in 1919-1920 and 1939-1945 and until 1944, a food tax was collected here, which made ordinary consumer goods more expensive for inhabitants of inner Bratislava. Among the items on display is a short custom officer’s sword (on loan at the World Customs Organisation in Brussels), which is one of about 70 that are known to exist, and is considered by some to be one of the most beautifully designed swords from the first Czechoslovak state. Also on display is a lantern that enabled customs officers to work at night.

The museum’s normal opening hours are during weekends and state holidays from 13:00 to 18:00, “as we are otherwise regular employees of the Financial Administration”, Ščerbík explained.

SNM director Rastislav Púdelka told the TASR newswire that they had almost 17,000 visitors on this year’s Night of Museums, not only in Bratislava, but also in other venues across Slovakia. Other cities and towns that participated in the event, such as Nitra, Trenčín, Rimavská Sobota, Banská Bystrica (which opened its otherwise closed Matej House exposition) and Prešov, among others, reported an increase in the number of visitors, saying that the growing number of special programmes organised for the event helped boost attendance.