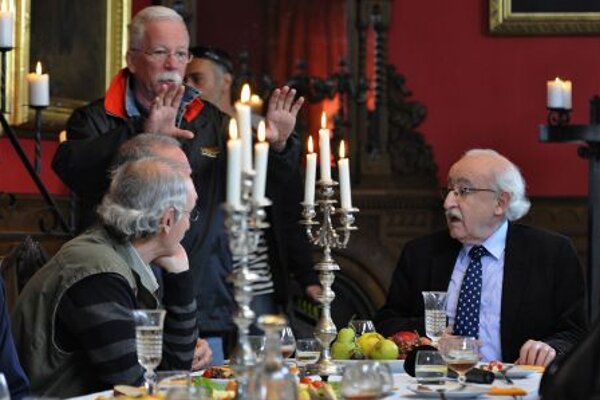 “I was born in Kežmarok,” Herz explained. “I spent my childhood years around the castle,” he told the TASR newswire. “This is my hometown, so where else should I shoot the film?” Today Herz splits his time between Munich and Prague.

Herz explained how the deal came together. “I got an offer to make a ten-minute movie as part of a feature-length film called Slovensko 2.0 that will celebrate the 20th anniversary of the independence of the Slovak Republic. Two years ago, I was named an honorary citizen of Kežmarok so I decided to feature Kežmarok in the film. That way I didn’t have to make anything up. So the plot is based on my own life in Kežmarok, how I was a bad student, fighting all the time, and how I was once thrown out, banned from ever returning to the town.”

In the movie, Herz plays himself. His brothers, Rudolf and Ladislav, also have roles and Kežmarok mayor Igor Šajtlava even landed a part.

The crew of about 20 shot completed Kežmarok sequences in four days.

“Kežmarok is a peaceful town,” Herz noted. “There are no settings suitable for a horror movie, so we had to finish up at Spiš Castle.”

The movie is scheduled to open in the autumn of 2013. “This is the first important film shoot in the area since the 1970s when a film about Slovak explorer and adventurer Móric Beňovský was made here,” Erika Cintuľová of the Kežmarok Museum recalled.

Juraj Herz was born in 1934, studied photography in Bratislava, then went on to work for the Semafor Theatre and later became a movie director at Barrandov studios.