Medical workers may be forced to work

TOWARDS the end of 2011 the Slovak health-care sector faced a crisis when around 2,400 doctors working in state-run hospitals submitted their resignations en masse in September in a dispute over pay and conditions. The situation culminated at the beginning of December with 1,226 protesting doctors actually leaving their jobs. In a bid to maintain provision of hospital services the government declared a state of emergency. In theory, this should have compelled doctors to work, but many failed to report to hospitals and patient care was thereby threatened (the dispute was resolved shortly afterwards). Parliament has now passed legislation which, according to the health minister, should prevent such a situation from being repeated. 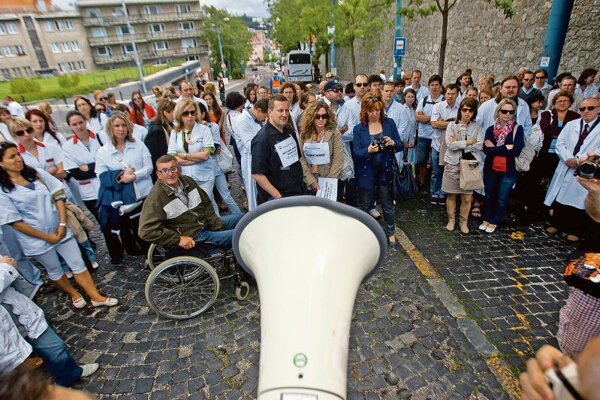 TOWARDS the end of 2011 the Slovak health-care sector faced a crisis when around 2,400 doctors working in state-run hospitals submitted their resignations en masse in September in a dispute over pay and conditions. The situation culminated at the beginning of December with 1,226 protesting doctors actually leaving their jobs. In a bid to maintain provision of hospital services the government declared a state of emergency. In theory, this should have compelled doctors to work, but many failed to report to hospitals and patient care was thereby threatened (the dispute was resolved shortly afterwards). Parliament has now passed legislation which, according to the health minister, should prevent such a situation from being repeated.

On May 22, MPs passed amendments to the Criminal Code and to the law on health-care providers. These will, among other things, impose stricter penalties on medical workers who refuse to come to work during a state of emergency. While the Health Ministry defended the change by referring to patient protection and the need to have special legislation for extraordinary situations, doctors’ representatives branded the move an attempt to criminalise their profession and said they were considering steps to prevent the new rules from coming into force.

Justice Minister Tomáš Borec stressed that the rules are nothing new for medical employees. The status of certain occupations, including medical workers, is already regulated by the constitutional laws on the security of the state during wars and states of emergency, as well as the law on economic mobilisation and the law on the management of the state during crisis conditions apart from war.

The aim is to prevent a situation in which the health or lives of patients might be put in danger during a state of emergency, as defined by specific laws, Borec told TV news channel TA3.

The Health Ministry insisted that the measures do not criminalise health-care workers.

“The primary task of the state should be the protection of the life and health of its citizens,” ministry spokesperson Zuzana Čižmáriková told The Slovak Spectator, adding that these duties can require preventative action.

The amendment, which was prepared by ruling Smer party MP Jozef Valocký, allows those who do not come to work during a crisis situation, or deliberately avoid it by pretending to be ill, to be punished by up to two years in prison. If such behaviour results in serious damage to health, or the death of patients, the medical worker in question could face two to five years in prison, the SITA newswire wrote.

The amendment also imposes further sanctions, including a fine of €3,300 if medical workers do not follow the instructions from the authorities to provide health-care treatment during crisis situation, and subsequent loss of registration with their respective professional chambers for 10 years. Moreover, it changes the conditions for proving the probity of the health-care employees, SITA wrote.

The rules will apply to all employees in the health-care sector since the state has the right to order those in work to continue working, and those who are unemployed to come to work, the press department of the Health Ministry explained to The Slovak Spectator.

If the president signs the bill into law, the new rules will come into force as of July 1.

The ministry added that to prevent a repetition of a situation in which there are mass resignations, and in order to minimise the threat to the lives and health of citizens, it plans to continue a dialogue with all interested parties.

“We are honestly disappointed that the law on criminal liability, as well as crisis situations for medical workers, was finally passed,” said Marian Kollár, the president of the Slovak Medical Chamber (SLK), as quoted by the Sme daily, after parliament passed the amendment.

The fact that the amendment was prepared by an MP, and not the legislative department of the Health Ministry, meant that it was not subject to either interdepartmental review or public discussion, Peter Visolajský, chair of the Medical Trade Unions Association (LOZ), told The Slovak Spectator.

The lack of discussion over the changes was also criticised by Vladimír Balogh, an adviser to the SLK presidium, who told The Slovak Spectator that “due to the lack of dialogue and unclear wording there is an evident threat of possible misuse of these legislative regulations against medical employees”. He added that it is also a reason for increased dissatisfaction among health-care workers which might be risky for the government.

Iveta Lazorová, deputy chair of the Slovak Chamber of Nurses and Midwives (SKSaPA), said the main risks lay in the right that is given to the Health Ministry to impose a fine on health-care workers which is 10 times higher than the equivalent for ordinary people, and in the potential use of a state of emergency to deny the right of such people to resign, thereby infringing their right to move and work freely anywhere in the European Union. Moreover, the new measures allow medical employees’ medical registration to be withdrawn and for them to be prevented from working in their profession for up to 10 years without any guilty verdict by a court but instead based only on a decision by the Health Ministry, she told The Slovak Spectator.

Visolajský also said that the amendment to the Criminal Code violates the Abolition of Forced Labour Convention of the International Labour Organisation, which abolishes forced labour and was passed in 1957. Moreover, the amendment does not solve the main problem of the health-care sector, which is a lack of doctors. Conversely, it deepens it and might even result in the departure of doctors not only from hospitals but also from Slovakia, he said.

According to Jana Kostrábová, a lawyer with TaylorWessing e/n/w/c advokáti law firm, the obligation of health-care employees to work during a state of emergency is already regulated by the constitutional law on the security of the state during wars and states of emergency passed in 2002. The current amendment to the Criminal Code, and, specifically, act on regulation of health-care professions, in fact replicates this obligation, and imposes particular sanctions if medical employees refuse to work. Kostrábová pointed to the fact that besides the health-care employees, the amendment does not introduce any specific duties for other employees who are obliged to work during a state of emergency or crisis.

“For these reasons it is possible to agree with medical employees that the changes are aimed against them – the reason is that the amendment separately deals only with the duties of medical workers during a crisis situation, but not the duties of other employees in sectors where the ‘obligation to work’ might be imposed during a crisis,” Kostrábová told The Slovak Spectator. “However, the new provision of Criminal Code generally applies to any refusal to work in ‘sensitive’ industries during a crisis, so it is not excluded, that other occupations might be affected by criminal liability too.”

Kostrábová said that if the state wanted to avoid a repetition of the situation from late 2011, it could be more effective to impose a constitutional ban on the right to strike. At the moment judges, prosecutors, soldiers, police, fire-fighters and rescuers are not allowed to strike, since their strike might lead to endangerment of the lives, health and property of inhabitants, she explained. Declaring a crisis situation might lead to a more serious threat to human rights and freedoms, the lawyer added.

When it comes to other countries, in Austria or Germany, there are no provisions setting criminal liability of certain occupations during a state of emergency, except for members of the armed forces. Similarly to the Slovak crime of “not providing of help”, in Czech Republic, there is a general rule which aggravates the liability of those, who are according to their occupation obliged to provide help (e.g. medical employees), Kostrábová said. She added that the only employees who face sanctions if they fail to fulfil their duties in most jurisdictions are members of the armed forces.

Bodies representing health-care workers are now considering several steps in order to prevent the amendment from coming into force. First, they want to arrange a meeting with the president to ask him not to sign the bill into law. Second, they plan to address MPs and ask them to submit a complaint to the Constitutional Court.

Head of the Trade Union of Nurses and Midwives (OZSaPA) Monika Kavecká said that her union already has an analysis proving that the amendment restricts workers’ right to strike, which is guaranteed by the constitution, SITA wrote.

Moreover, Kavecká dislikes the fact that the institution which will decide on criminal responsibility is the Health Ministry, which she considers “highly abnormal among countries of the European Union”, as reported by SITA.

To submit the complaint to the Constitutional Court the medical workers’ unions must collect the signatures of at least 30 MPs.

The final step that affected health-care unions say they may take is to start collecting signatures for a petition that will call on members of the public “to stand up for our rights and against discrimination of us”, Lazorová told The Slovak Spectator.

Meanwhile, health-care workers’ representatives tried to meet Speaker of the Parliament Pavol Paška on May 28, but he cancelled the meeting saying he was busy, SITA wrote.

Several international organisations active in the health-care sector have supported the Slovak workers’ protests. The biggest European organisation of medical trade unions, the European Federation of Salaried Doctors (FEMS), even wrote a letter to the Slovak authorities, expressing concern over the current situation. It referred to “forced labour” and called on the government to halt the legislative process, the TASR newswire wrote.

Other organisations, including the European Association of Senior Hospital Physicians and the medical associations of Portugal, Romania, Bulgaria and Italy, expressed support for their Slovak colleagues, also referring to possible forced labour, TASR reported.